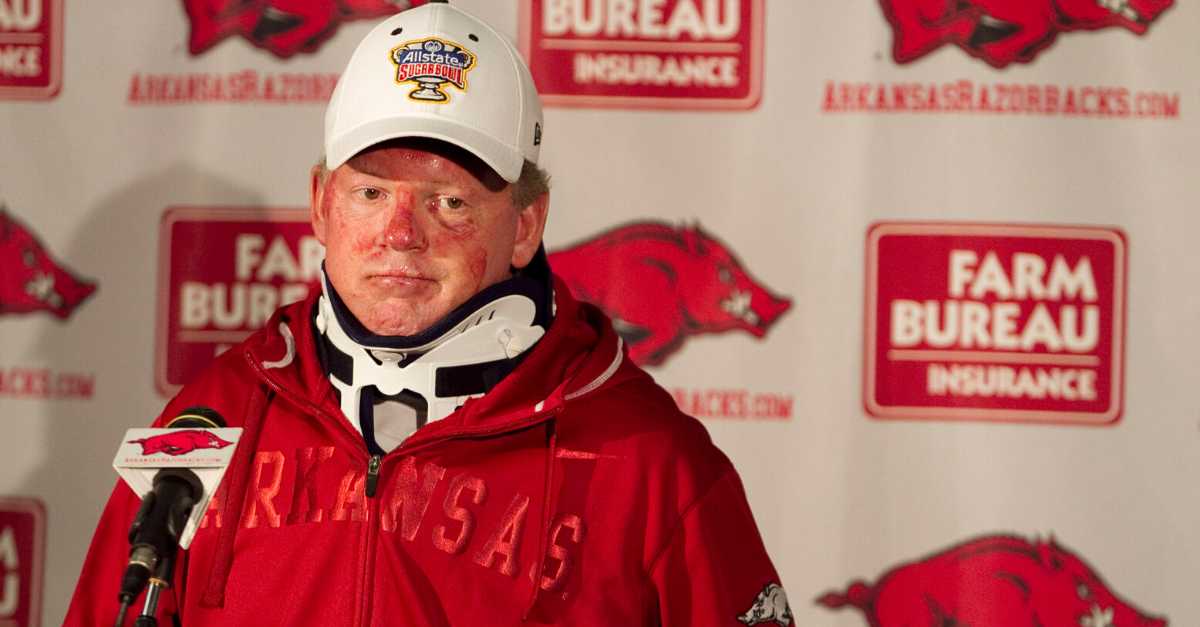 To say the Arkansas Razorbacks football program is in bad shape right now would be a massive understatement. They just fired head coach Chad Morris after less than two seasons of dismal play and winless record in the SEC. There?s currently more questions than answers on how to turn things around, but thousands of Arkansas fans believe in one rather odd solution.

A decade ago, if you would have told fans in Fayetteville that the University of Arkansas would be looking for their fourth head football coach in eight years, they probably would have laughed at you. The football team was dominant and heavily in the BCS mix.

Then, after the 2012 Cotton Bowl, the Hogs program went in the wrong direction following the infamous motorcycle accident involving head coach Bobby Petrino. Former Arkansas athletic director Jeff Long fired Petrino and everything has been downhill ever since.

That?s why one fan started a petition on Change.org and called for current athletic director Hunter Yurachek to re-hire Bobby Petrino. The craziest part? Over 12,000 Arkansas fans signed it.

The petition started before Morris was fired, but it picked up some serious steam. It might be a loud, vocal minority, but there are some Razorback fans who really want to see Petrino back on the sideline.

After all, Arkansas football hasn?t even reached a bowl game since 2016.

Here are some of the reasons from the petition that fans want Coach Petrino back:

? Petrino has a stellar reputation for developing players, something crucial for an SEC team competing for recruits against Alabama, LSU, Texas, et al.  Lamar Jackson was a 3-star recruit (247sports.com), and went on to bring the Heisman trophy back to Louisville.  Quarterback Ryan Mallett had a 43% completion rate his sole year at Michigan.  Under Petrino, he steadily moved up to a 65% completion rate. (+22)

? Petrino has always been very vocally supportive of playing games in Little Rock.  After he left, there has been more and more pushback from university management against having competitive games played at War Memorial Stadium.  There have also been efforts to minimize the number of games played there, if not eradicate.  Petrino understands what the Razorbacks mean to the entire state, and how having that connection in Little Rock is good for fans spanning from Jonesboro to Texarkana.

At the end of the day, Razorback Nation wants to win football games, and if that means bringing back Bobby Petrino to make it happen, so be it.