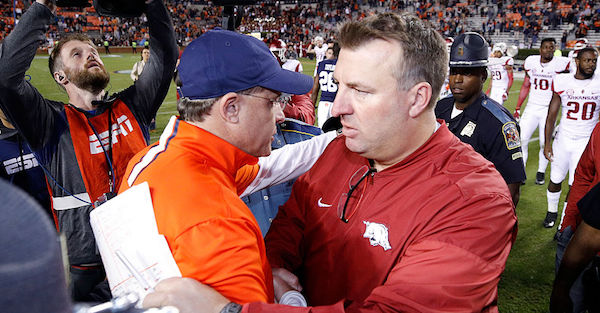 Things haven’t gone well for the Arkansas Razorbacks on the gridiron this season and, frankly, it feels worse around the program than the team’s 4-6 record would indicate. With that as the backdrop, athletic director Jeff Long was relieved of his duties on Wednesday and that shined a (very) bright light on the status of head football coach Bret Bielema moving forward.

In fact, Wally Hall of the Arkansas Democrat-Gazette believes there is little doubt that Bielema will be shown the door in the very near future and he shared that bit of insight with Paul Finebaum of ESPN on Wednesday afternoon.

None of this is surprising, simply because the ousting of Long certainly seems to foreshadow a move on Bielema given the close proximity of the two figures in that community. Still, it is another thing entirely for a beatwriter of sorts to indicate this publicly and that says quite a bit about Bielema’s future.

Arkansas opening its head coaching job at the same time as Tennessee, Florida and others would certainly be interesting on a number of levels and, if Bielema is let go, the search will be one to monitor. Until then, he might just be a dead man walking in Fayetteville.