The Iron Bowl has not gone the way Auburn football would like over the past 10 or so seasons, but Tigers fans will never forget when Alabama blew a 24-point lead in their own backyard inside Bryant-Denny Stadium.

During the 2010 Iron Bowl, Nick Saban and the Alabama Crimson Tide jumped out to an early lead behind quarterback Greg McElroy, but no lead was safe with Cam Newton leading the Auburn Tigers during their undefeated 2010 season.

Newton, who against LSU orchestrated his memorable "Heisman Moment", won the hearts of his school's faithful and produced a nightmarish memory for Alabama fans that day in Tuscaloosa.

43 days to kickoff: The final touchdown that capped off the epic ?Camback? in the 2010 Iron Bowl. Lutzenkirchen will forever be remembered for one of the most memorable plays in Auburn history. #RIP #TeachMeHowToLutzie #WDE pic.twitter.com/0ssfgrIqSm

Entering college football's biggest rivalry game on November 26th, 2010 in Tuscaloosa, Newton and head coach Gene Chizik led the Tigers to an 11-0 record and had just defeated the Georgia Bulldogs, 49-31. They had already locked up the SEC West division since both LSU and Alabama had two conference losses.

But the Iron Bowl is more than just a game, and it was one the Tigers didn't exactly start well in 2010.

The Crimson Tide got started early with a nine-yard touchdown from 2009 Heisman Trophy winner Mark Ingram less than four minutes into the game. Greg McElroy would throw two touchdown passes before the end of the first quarter, one to Julio Jones and the other to Darius Hanks.

Jeremy Shelley hit a 20-yard field goal at the eight-minute mark of the second quarter to extend the Tide lead to 24-0.

Then, college football's best player that season went to work.

Cam Newton, who at this point in the year was the front-runner to win the Heisman Trophy, actually had one of his worst statistical performances of the 2010 season. But with just five minutes remaining in the first half, Newton found wide receiver Emory Blake for a 36-yard touchdown to finally break the shutout.

It wasn't long after halftime that Auburn scored again. Just 56 seconds into the second half, Newton tossed the ball to Terrell Zachery down the sideline, who made two defenders miss tackles and scored from 70 yards out.

At this point, you could feel the momentum begin to shift.

There have been so many great Iron Bowl finishes. The 2010 ?Camback? has to sit near the top of that list! #SECcountdown #WDE pic.twitter.com/0ktrkiMY2k

With just over four minutes left in the third quarter, Newton accounted for his third score of the day, bulldozing his way into the end zone from one-yard away. But Alabama would answer with a 32-yard field goal from Shelley to bring their lead back to six points.

It didn't take the Tigers long to get back down the field with an answer of their own. In the fourth quarter, Newton created time in the pocket and found Philip Lutzenkirchen running across the field toward the left pylon and hit him as he was back-pedaling into the end zone.

The game's biggest moment, however, came when Bama's defense couldn't force Newton and the Tigers' offense to punt late in the game. With 3:12 left in the game, on 4th-down-and-inches from their own 37-yard line, Newton jumped over a pile of lineman and tumbled for a first down. 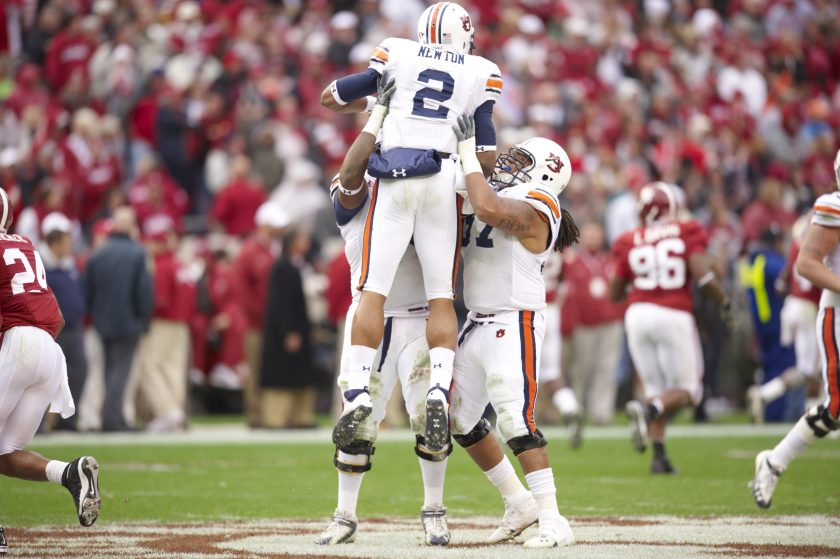 Auburn went on to run the clock down under a minute before punting. Alabama failed to even complete a pass on its final drive, and the Tigers completed the comeback, winning the 2010 Iron Bowl by the final score of 28-27.

To basically hold the Alabama offense for three quarters is pretty impressive since they ended up with the 18th best scoring offense in the country that year. And then, for Auburn to score 28 points after struggling in the first quarter against a defense full of future NFL players, which allowed just 13.5 points per game in 2010, is truly spectacular.

Nick Fairley and the Auburn defense held running backs Ingram and Trent Richardson to a combined 60 rushing yards and one touchdown. Ingram did catch four passes for 91 yards.

Epic. That's the only word for the 2010 Iron Bowl. Most important TO of the year: Down 24-0, Antonio Carter punches ball out or its 31-0. That changed the game. It gave us a chance for a historic comeback at Bryant-Denny. We battled back behind Cam & solid D in the 2nd half. 1/2 pic.twitter.com/oVt2uLGeMM

For the first time, a Saban-led Alabama team blew a double-digit lead. The only other time that has happened came against Clemson in the 2016 National Championship game after leading 24-14 after three quarters. This Iron Bowl should be something Auburn fans never let Bama fans forget.

So, even though the Crimson Tide won four of five Iron Bowls following "The Kick Six," just remember that they had the chance to stop Auburn on their way to the SEC Championship against South Carolina and BCS National Championship against Oregon, but they blew a 24-point first quarter lead on their home field.

The win makes it that much better because this is a huge rivalry game. There are few rivalries that compare, like Ohio State versus Michigan or Georgia versus Florida, but the Iron Bowl is definitely the South's most important in-state rivalry.