By the time the Super Bowl rolls around, the state of Alabama can sit back and relax. They had their Super Bowl in November.

The Alabama-Auburn game is far and away the most important event in the state. It divides households between Auburn fans and Alabama faithful. It causes arguments over Thanksgiving dinner. It delivers moments that will forever be enshrined in college football history. Often times, the winner plays in the national championship game.

The Yellowhammer state football game is better known as the Iron Bowl. To fans of either school at Auburn University or the University of Alabama, the origin of the rivalry name is an important part of elementary school curriculum.

However, for football fans across the country, the reasoning behind the name isn't as familiar. We have to travel back nearly 60 years to learn the history behind college football's most heated rivalry.

Why is Alabama vs. Auburn Called The Iron Bowl? 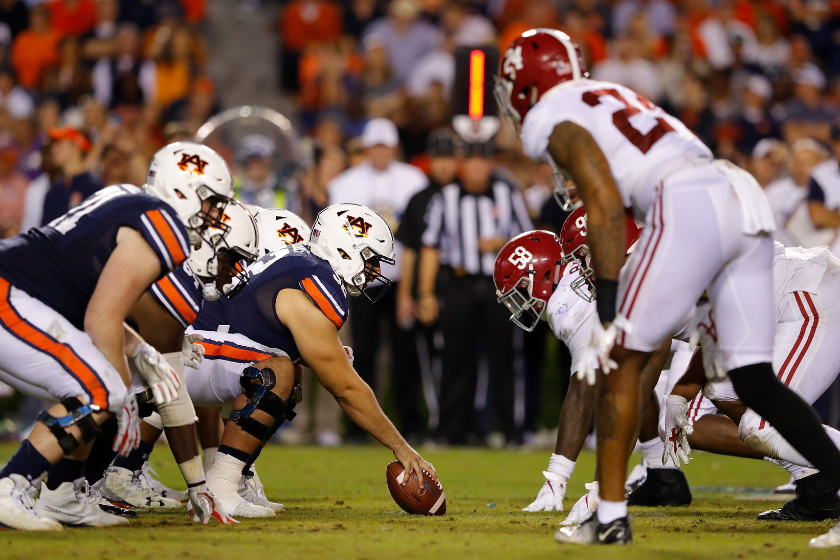 In 1964, the Auburn Tigers had high expectations. They entered the season as one of the country's top teams. Then, the Tigers fell to Kentucky, Georgia Tech and Florida and entered the Alabama game with a 6-3 record.

Before the matchup, Auburn coach Ralph "Shug" Jordan was asked by reporters how he would deal with not taking his team to a bowl game before playing the Tide. (At the time, there were only nine postseason games.)

According to AL.com, Jordan's response, which was confirmed by Birmingham-News reporter Jimmy Bryan in 1995, showed just how important the rivalry game was.

"We've got our bowl game. We have it every year. It's the Iron Bowl in Birmingham."

Bama vs. Auburn was no more. For the first time in series history and thereafter, the game would be known as the Iron Bowl.

Jordan's reasoning for the name allegedly stems from the prominence of the steel industry in Birmingham, where the game was regularly played at neutral site Legion Field until 1989. So, yes, you can thank Auburn football for coining the iconic nickname.

did you know.. the IRON BOWL received it's name because of the historic steel industry in Birmingham, AL pic.twitter.com/G89MTJeUtT