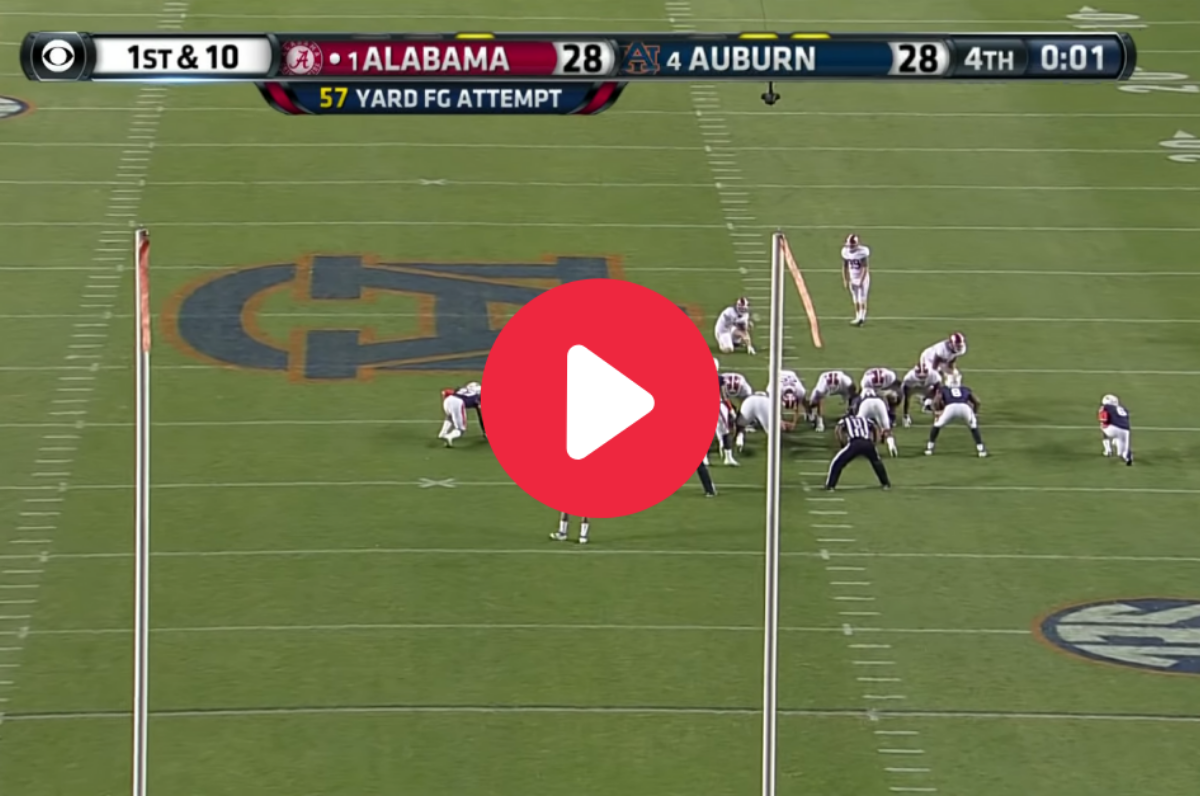 In 2013, the Alabama Crimson Tide were the top-ranked team in college football the entire regular season. The Tide were at the height of their modern dynasty, having won two-consecutive BCS National Championships, and were barreling toward another that year.

What lay ahead of them was the 2013 Iron Bowl matchup against the fourth-ranked Auburn Tigers, a game the Crimson Tide were favored to win by 10 points. With star running backs T.J. Yeldon for Alabama and Tre Mason of Auburn going blow-for-blow the entire game, it was possibly the most shocking special teams play in college football history that sent Auburn fans into a frenzy on November 30, 2013.

With two minutes to play, Auburn quarterback Nick Marshall orchestrated a seven-play, 65-yard touchdown drive, which ended on a 39-yard touchdown pass to Sammie Coates, to tie the game. With 32 seconds on the clock, Alabama took over and drove into Auburn territory.

Having missed three field goals already, head coach Nick Saban decided to sit kicker Cade Foster in the fourth quarter and give redshirt freshman Adam Griffith, who had kicked only two field goals his entire collegiate career, a shot at winning the Iron Bowl with one second left.

Griffith lined up for a 57-yard field goal attempt, fired a missile that landed short in the end zone, and 2013 First-Team All-American cornerback Chris Davis etched his name into Auburn University history when he raced up the sideline on the CBS broadcast’s final play.

While some calls in sports will live on forever, perhaps none continue to send chills down my spine like hearing long-time Auburn announcer Rod Bramblett call the Kick-Six.

“OH MY LORD IN HEAVEN! Chris Davis just ran it 109 yards, and Auburn is going to the championship game!”

Bramblett and his wife were tragically killed in a car accident in May 2019. While his iconic call remains in the hearts of Auburn fans forever, it’s just a microcosm of how passionate he was for Auburn athletics during his career.

Gus Malzahn’s team rode the momentum of this absolutely historic win that won the SEC West into a 59-42 win over the Missouri Tigers in the SEC Championship game, which earned the team a bid to play for the BCS National Title against Heisman Trophy winner Jameis Winston and the Florida State Seminoles.

Auburn lost that title game in the closing seconds, but the hype around The Kick-Six win will live on forever — Just ask these fans whose reactions were (thankfully) caught on tape.

Following that game-winning touchdown off a missed field goal, Auburn football only won one of the next four Iron Bowls, but something tells me that fans down on The Plains won’t mind taking a few losses when you have the memories of storming the field at Jordan-Hare Stadium, plus seeing the stone-cold faces of Alabama fans and Nick Saban, following maybe the greatest ending to a college football game ever.

This article was originally published November 20, 2018.

MORE: Auburn’s First Iron Bowl at Jordan-Hare is a Day to Remember Forever