To be considered the greatest in whatever you do takes patience and time. For Alabama Crimson Tide head coach Nick Saban, it's taken over 40 years of coaching football at the collegiate and professional levels to even enter the conversation, but a few more seasons might be all it takes to solidify Saban's case as the best college football coach to ever live.

He already has seven national championships, nine SEC titles, one MAC title in his only season coaching the Toledo Rockets, every single Coach of the Year award imaginable in his pocket and his Alabama dynasty isn't slowing down.

But after all these years and hundreds of wins, how much money has Saban made? Whenever he chooses to retire, which some people believe could happen sooner than you think, the pride of Fairmont, West Virginia, will be remembered as a legend when he rides off into the sunset with a handsome bottom line in his bank account too.

Before Bama Greatness, There was Saban's Kent State-ness

Nicholas Lou Saban Jr., just outside of Monongah, West Virginia, played defensive back for Kent State University and began his coaching career as a graduate assistant at his alma mater under Don James while attending graduate school. Saban graduated in 1973 with a bachelor's degree in business, which he later followed up with a master's degree in sports administration in 1975.

According to an article published in The Blade, Saban's first job as a head coach landed him a three-year deal around $65,000 per year. Introduced as "one of the most hard-working and intense coaches in the game today," Saban turned the University of Toledo from a team that won 15 games over the previous three seasons into a 9-2 team in 1990. Saban also received around $30,000 for radio and television appearances that year.

Curiously, Saban declined an application from a coach looking for a job on Saban's staff that season. That man was Urban Meyer.

Second Jump to the NFL with a Familiar Face

Prior to his year with Toledo, Saban was a defensive assistant with the Houston Oilers for two years. After one season, he resigned from Toledo to join the Cleveland Browns as their defensive coordinator for four years under then-head coach Bill Belichick. Saban reportedly made around $150,000 a year, but later called the experience the "worst four years of my life."

He left the NFL to return to the college coaching ranks in East Lansing, Michigan. 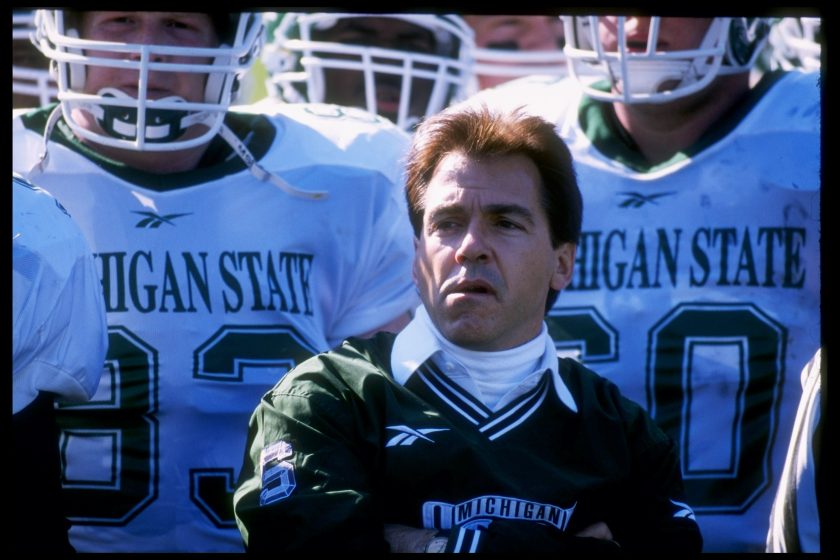 After his stint with MSU, Saban was hired to take over an NCAA sanction-riddled program where he earned $697,330 per year over five seasons leading the Spartans, according to the Associated Press (h/t Los Angeles Times). Michigan State would see moderate success through Saban's first four years before finishing 10-2 and winning the Citrus Bowl in 1999.

After that, Saban landed the job that jettisoned him into the national spotlight down in Baton Rouge, Louisiana. 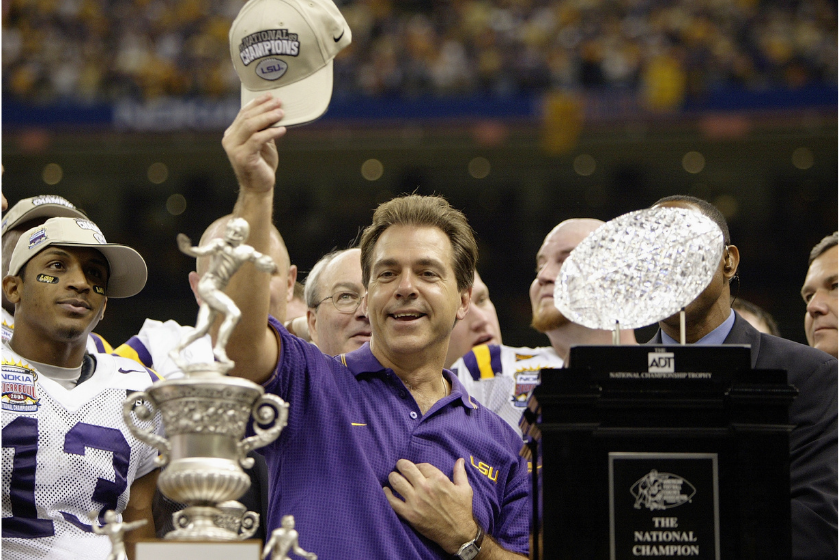 In December 1999, Saban accepted the head coaching job at LSU on a five-year contract worth about $1.2 million annually. At the time, Saban joined Florida State's Bobby Bowden, Florida's Steve Spurrier, and Tennessee's Phillip Fulmer as the only college football coaches making over $1 million per year.

Over the next five seasons, Saban would deliver LSU two SEC Championships and defeat the Oklahoma Sooners to win the 2003 BCS National Championship game. The following February, Saban signed a seven-year contract extension starting at $2.3 million per year from LSU.

However, Saban only coached one more season for Louisiana State University. After compiling a 48-16 record over five years, decided to take his talents to the National Football League once again. 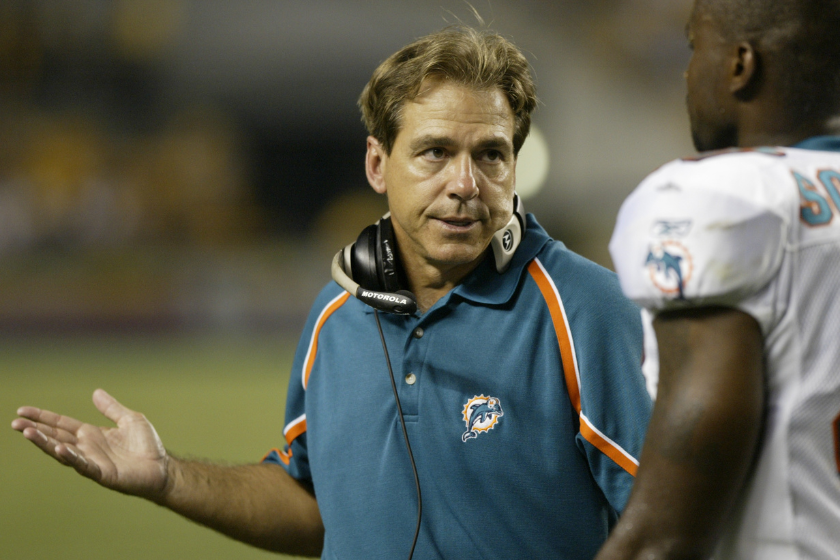 Saban agreed to a five-year deal worth around $5 million per year to become the sixth head coach of the Miami Dolphins for the 2005 season. If there is any blemish on Saban's Hall of Fame career, it was the two years he spent in South Beach trying to jumpstart the Dolphins. Miami finished 9-7 in 2005 and nearly missed the playoffs, but declined the following year to finish 6-10, which was dead last in the AFC East division.

When the University of Alabama fired head coach Mike Shula, rumors began to swirl that Saban would takeover the Crimson Tide program after the 2006 NFL season concluded. Naturally, Saban denied these rumors during the year, but that later proved to be a bargaining tactic.

In January 2007, Saban accepted the head coaching position with the Alabama Crimson Tide. 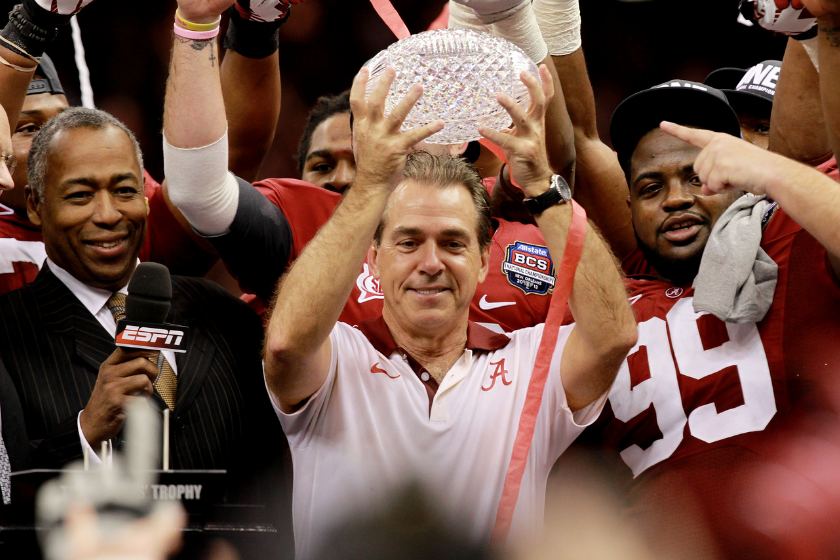 According to ESPN, Saban's first contract was worth $32 million guaranteed over eight years, as well as additional bonuses built-in throughout the deal.

Over the next decade, Alabama won five national titles -- tying Saban with Bear Bryant for the most titles by a head football coach -- more than 140 games, plus the Tide finished first in the SEC West division an eye-popping nine times. Saban's contract was reworked several times over that span, including another raise, signing bonus and extension in 2018 that kept him in Tuscaloosa through the 2025 college football season. In 2021, he signed an extension that will keep him in Tuscaloosa through the 2028 season. He'll be battling the likes of Georgia, LSU, Texas A&M and Clemson for a long time to come.

It Pays Well to Be Nick Saban 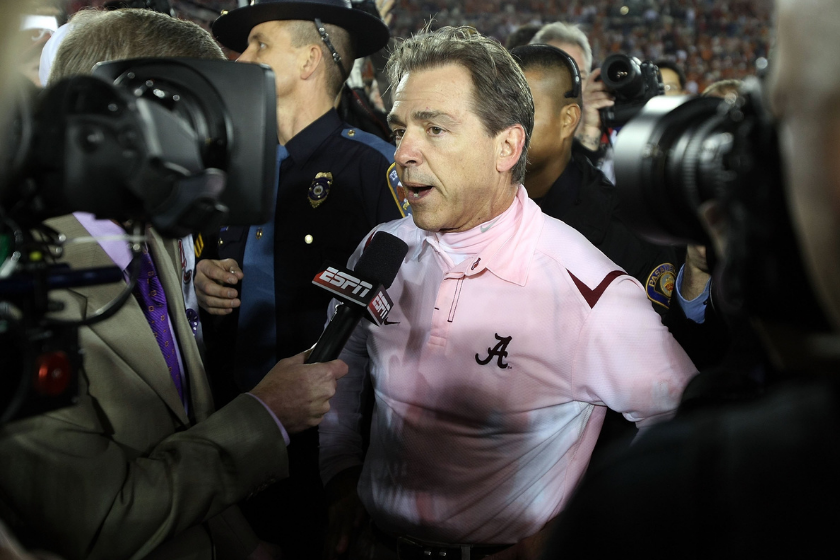 Nick Saban received $8.307 million in 2018 as the highest paid college coach in the United States, according to USA Today's database. That number has risen consistently and he makes more than any NCAA Division I football coach in 2021, topping the list of college football's highest-paid coaches.

How much he'll take home for an incredible 2021 season remains to be seen, but he'll make at least another $725,000 for Alabama reaching the College Football Playoff National Championship (he takes home $125,000 for winning the SEC Championship Game and either $600,000 for losing the national title game or $800,000 for winning it, via The Tuscaloosa News).

According to The Tuscaloosa News, Saban took home quite the money haul for his 2020 national championship season despite the COVID-19 pandemic. He made more than $10 million after considering a $9.3 million salary, a $200,000 bonus for winning the CFP and $950,000 for other on-field bonuses such as SEC Coach of the Year. The final official number: $10.05 million.

According to an article published on AL.com, Saban has received multiple forms of income from various sources throughout the years aside from his coaching contracts.

Saban has bought and sold properties throughout the years, which accounts for some of these numbers. According to CelebTattler.com, Saban sold a 10,000-square foot summer home in an auction back in 2013 for $10.95 million.

Saban's also received payments from two books -- "Tiger Turnaround" and "How Good Do You Want to Be?" -- that he wrote and had published in the early 2000s.

The American football coach has also appeared in numerous Aflac commercials alongside the insurance company's iconic duck, but it's uncertain how much Saban made for those spots.

Nick and Terry Saban established the Nick's Kids Foundation while he was at Michigan State, which has continued to this day. Since they arrived in Tuscaloosa, the Sabans have donated nearly $6 million to over 150 charities through their foundation. They've partnered with Project Team Up and Habitat for Humanity, as well as donating thousands of dollars to scholarship programs. The devoutly religious couple also provided donations to build the Saban Catholic Student Center with the St. Francis Catholic Church.

In 2019, Nick's Kids Foundation donated over $560,000 to local organizations to change the lives of young children as the grow and develop. 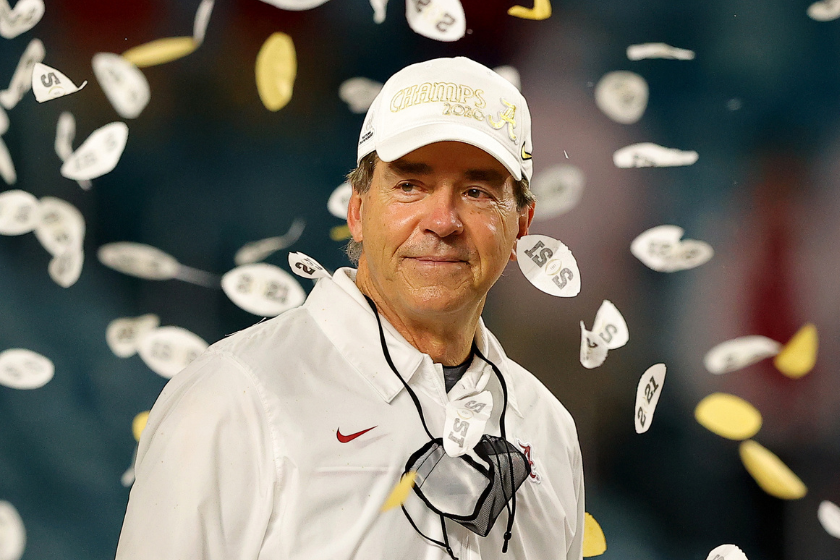 According to Celebrity Net Worth, Nick Saban's net worth is an estimated $60 million. However, factoring in the Alabama coach's base salary, which is nearly $10 million and more than everyone on the list of highest-paid coaches including Dabo Swinney, the Alabama Crimson Tide's leader could easily be worth plenty more for his career. Saban was also the highest-paid college football coach in the country, until Kirby Smart's contract extension put him over the top. As if Georgia beating Bama in the national championship wasn't enough...

As long as the Alabama football team keeps their winning ways and reaching the College Football Playoff, the 70-year-old coach figures to lead the Tide until 2029 when his contract expires. Beyond that, it'll be a toss-up if he continues with another new deal deep into his 70s. Even if he doesn't continue after his current deal expires, it's safe to say Nicholas Lou Saban has a pretty healthy bank account waiting for him when he inevitably calls it quits.