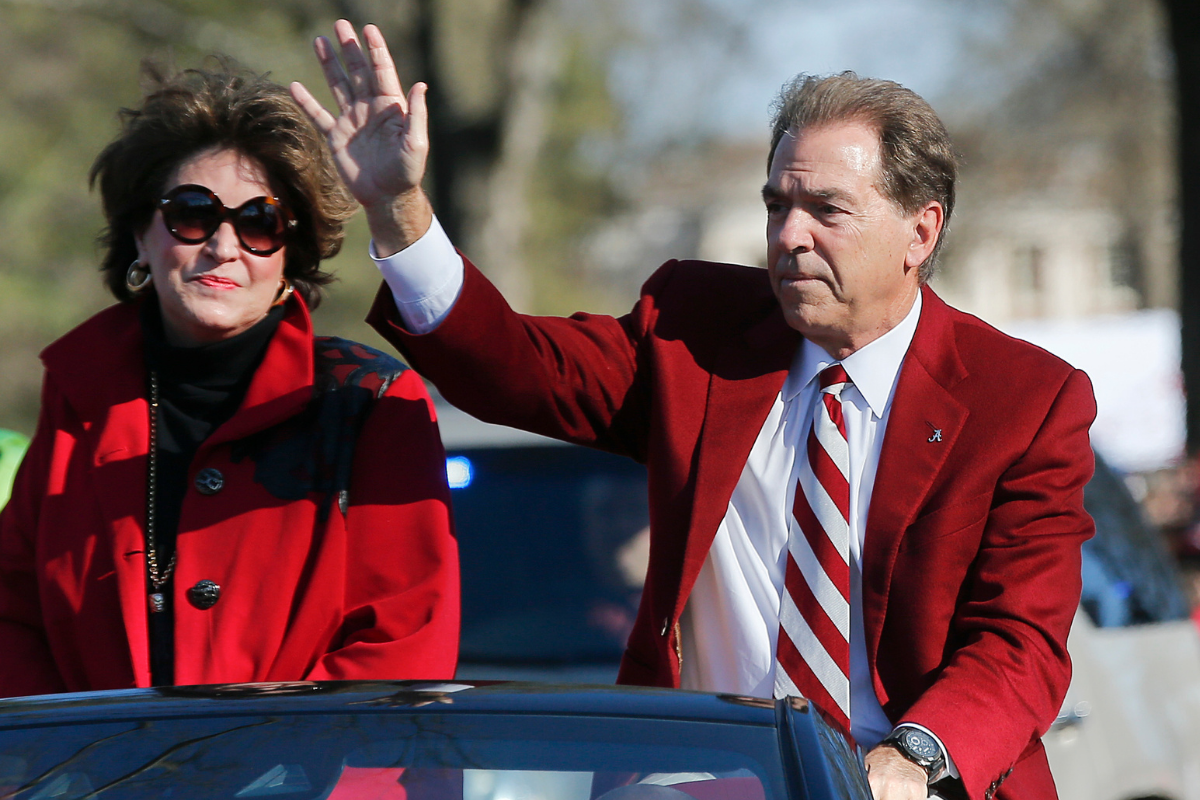 Nick Saban’s contract makes him the unofficial governor of Alabama. Saban, who is in the midst of leading potentially the greatest sports dynasty of all time, is put on a pedestal for his football acumen, but there is an incredible human being behind the stern-faced Crimson Tide leader.

Before Alabama, Saban’s beginnings as an assistant coach at Kent State (his alma mater) led him, and his wife Terry Saban, on a trek through places like Syracuse, West Virginia, Ohio State, Michigan State and Toledo before Saban jumped to the NFL as defensive coordinator for the Cleveland Browns in 1991.

He eventually landed the top job on Michigan State football team’s coaching staff, where he’d serve five years before joining the LSU Tigers in 2000. He then made the leap to the NFL to coach the Miami Dolphins for two years before coming back to the college level with Bama.

Find someone that looks at you the way Nick Saban looks at Miss Terry pic.twitter.com/35LnEJdJz6

On James Andrew Miller’s “Origins” podcast, Terry Saban told the story of getting their family’s first big bonus check, and how big of heart Nick Saban really has.

?Way back when our first NFL job?I want to say we were with the Cleveland Browns, and we won our first playoff game, which gave us our first huge bonus,? Saban?s wife said. ?In our mind, it was a huge bonus; it was probably $8,000. It was the first time we got a real chunk of money for winning some big championship. In my mind, I?m thinking, ?Ok. Pay off the Visa bill. Get a Baby Grand Piano. Go to the beach.? I?m thinking about all these wonderful things we can do with that check.?

Temptation has to set in, especially after building a long career in football to get to this point, right?

Not for old Nick Saban. He had other plans.

?And I?ll never forget Nick came home, and he said, ?I think it?s time we did something for your parents.? My dad was a coal miner and everything he had was the Cleveland Browns?sweatshirts and coats and hats and jackets. We arranged to pay off his mortgage on his house, which, you know, not a lot but at the time it seemed like a lot. It was one less thing they would have to worry about on a monthly basis.

“So, we did. We paid off the mortgage and got the title to the house and stuffed it in the pocket of the Cleveland Browns jacket. I?ll never forget him opening that jacket and putting it on and tipping his hat and laughing, saying, ?Man, I love it.? I said, ?Check your pocket, dad.? And he reached in and saw the title to the house, and he said, ?Now, I can die in peace.?”

This is incredible. The Alabama Crimson Tide head coach is a close-to-the-cuff type of man, and his personal side is often buried behind a wall of trophies and stats about Alabama’s dominance.

But the first thing he thinks to do is help out his in-laws? There are some of us who take issue just going over to our significant other’s parents to eat lunch.

This story offers a glimpse into Saban?s life that is rarely seen behind the spotlight of his multiple national titles, and it doesn?t stop with a simple family donation.

Nick and Terry Saban devote a vast amount of personal resources and time to Nick’s Kids Foundation, a charitable organization they founded in 1998 to help children, students and teachers reach their full potentials all over Alabama and the Southeastern United States.

One quote on the foundation’s website, said by Nick Saban’s father, is all you need to know about where the true character of college football’s premier coach came from:

“No man stands as tall as he who stoops to help a child.”

Nick Saban is arguably the greatest football coach who ever lived. He might also be one of the greatest men to ever give back to the people who need it most.

Saban has managed to maintain a level head despite the vast amount of success he’s achieved. The Alabama football coach has won six National Championships during his tenure in Tuscaloosa, including three in the College Football Playoff era. Bama has won three of its five championship games in the CFP, including wins over Ohio State, Clemson and Georgia and losses to Dabo Swinney’s Clemson Tigers (Ed Orgeron’s LSU Tigers winning in 2019 felt like a loss, too).

In June of 2021, the Tide handed the two-time Coach of the Year an eight-year contract extension which features a base salary of $8.425 million. The new contract will keep head coach Nick Saban with the football program through the 2028 college football season. The deal also includes bonuses for reaching the SEC Title game and the CFP semifinal, as well as the final, per USA Today.

Before any of that, though, Nick Saban used his first bonus check to help his in-laws.

This article was originally published August 9, 2018, but this is a classic Nick Saban story that deserves to be seen again.