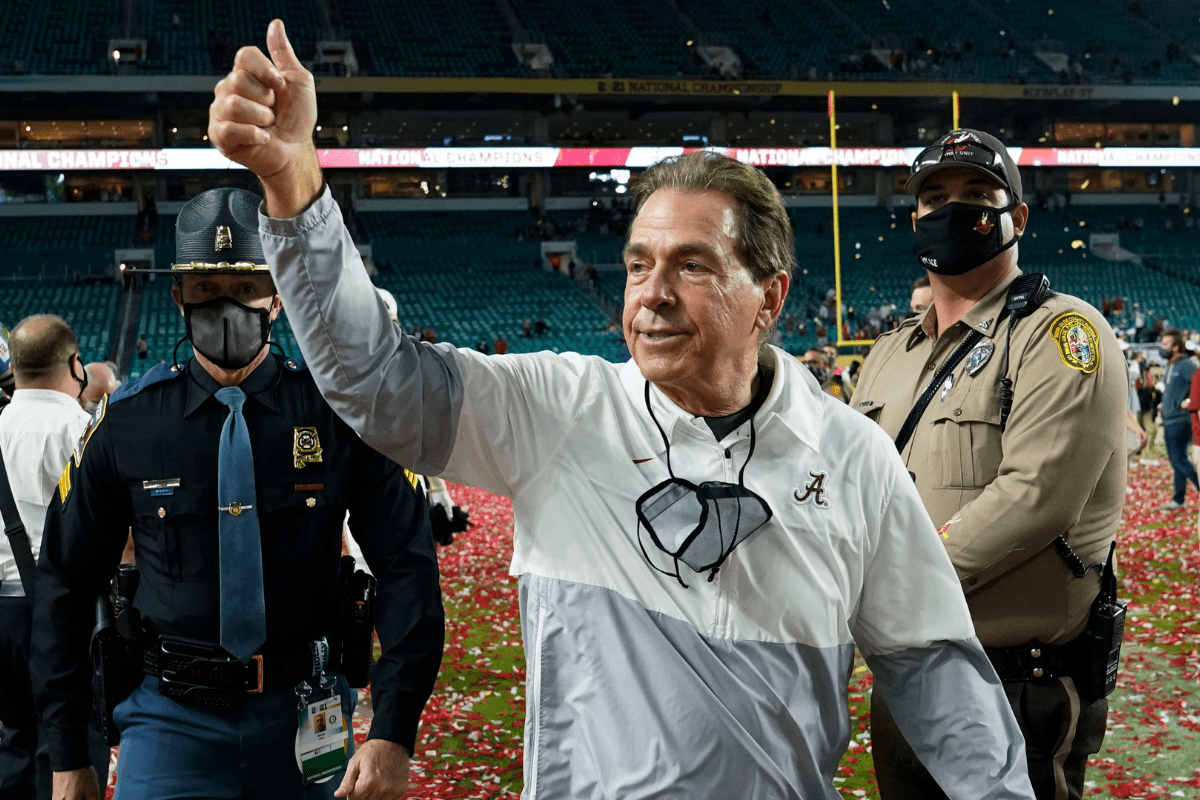 Paul “Bear” Bryant retired at 69. Tom Osborne retired at 75. Joe Paterno…well, let’s not even go there.

Alabama Crimson Tide head coach Nick Saban is 69. He just won his seventh national title (an NCAA record after surpassing Bryant) and his sixth in Tuscaloosa after beating the Ohio State Buckeyes in the College Football Playoff National Championship Game on Monday night. There isn’t a better head coach in the history of college football.

I’m sorry to tell you, Alabama fans. It’s time for the walking legend on the sidelines in Bryant-Denny Stadium to hang it up and retire.

Why Nick Saban Should Retire on Top

It doesn’t have to be today or tomorrow. Even if it’s after next season or the next national title, someone like Nick Saban deserves to retire after a national championship.

He’s already the greatest coach of all time. His storied career includes a national title at LSU, a failed NFL career with the Miami Dolphins and, of course, building an impressive dynasty at Alabama.

Saban will turn 70 in the middle of next season on October 31. He had hip replacement surgery in 2019. Let’s just say it: he’s getting up there in age.

With little else to prove on the field and an estimated net worth of about $60 million, Saban could live the life after retiring. He could play all the golf he wanted and fish until his hands blister. I’m sure his wife, Miss Terry Saban, would want that. Doesn’t that sound lovely?

Of course, Saban doesn’t want to retire. He’s a man who is driven to be perfect and to win. He might just do until his doctor tells him he shouldn’t.

At an SEC Championship Game press conference, he told reporters he had no plans to retire.

?I love doing what I do, and want to continue to do it for as long as I feel like I can contribute in a positive way to the program,? Saban said. ?That?s about the only plan I have for the future.?

Alabama Will Be Fine If He Retires

The year is 2040. Nick Saban refuses to retire. Alabama has just won their 30th National Championship. College Football still can’t come up with a formula to keep Bama out of the title picture and they still ain’t played nobody Pawl. #RollTide pic.twitter.com/ehg2L8xcfl

Let’s say he randomly decides to retire this offseason. Maybe it’s the next offseason. Either way, it would absolutely send shockwaves throughout the SEC and NCAA.

?The Alabama job immediately becomes the most sought-after job in football.

You know who I think would consider taking it? Dabo Swinney. Yes, the same Dabo Swinney who’s led the Clemson Tigers to two titles over Saban in the last five years.

He’s from Birmingham, Alabama. He played wide receiver for the Crimson Tide in the 1990s and even won a national championship with them in 1992. It would crush Clemson fans if their football coach left, but I’m not sure Swinney could turn down such an offer.

Saban has built a machine in The South. Bama has produced a lot of good players (no, great players) and Heisman Trophy winner DeVonta Smith and quarterback Mac Jones will be next.

Someone like the 51-year-old Dabo Swinney could easily take over and ride the University of Alabama football program dynasty for the next 20 or 30 years.

Nick Saban just put together arguably his greatest season ever in 2020 despite the COVID-19 pandemic. He doesn’t have plans to retire anytime soon, but the Alabama head coach shouldn’t wait to walk away.

Legends like him deserve to go out on top.