As members of the 1982 Alabama football team carried his casket down the steps of First Methodist Church of Tuscaloosa on Friday Jan. 28, 1983, everyone from governors to former players to fellow college football coaches poured out of the church following the funeral services.

Hundreds of thousands gathered in Birmingham that fateful day. Many lined the streets. Some watched the hearse carrying his body from an overpass above Interstate 59. Joe Namath, former governor George Wallace and Hall-of-Fame broadcaster Mel Allen looked on as he was lowered into the ground at Birmingham's Elmwood Cemetery.

In 25 years as the Alabama Crimson Tide head coach, Paul Bryant -- the man who fought in the Navy and earned his "Bear Bryant" nickname from a $1 bet -- became larger than life in Alabama. He won six national championships and 13 conference championships. No coach in NCAA football history had more wins than his 323 when he retired in 1982.

For Alabamians alive in 1983, today was one of those "Do you remember where you were?" days as people lined highways to pay tribute to @AlabamaFTBL coach Paul "Bear" Bryant as his funeral procession made its way from Tuscaloosa to his final resting place in Birmingham. pic.twitter.com/WbNn6p4Xtq

It appeared Alabama couldn't live without the beloved coach who could spotted wearing his signature houndstooth hat inside Bryant-Denny Stadium on Saturdays.

But it turns out Paul "Bear" Bryant couldn't live without Alabama.

In fact, four weeks before his death on Jan. 26, 1983, after coaching his last game, he predicted he wouldn't live much longer. 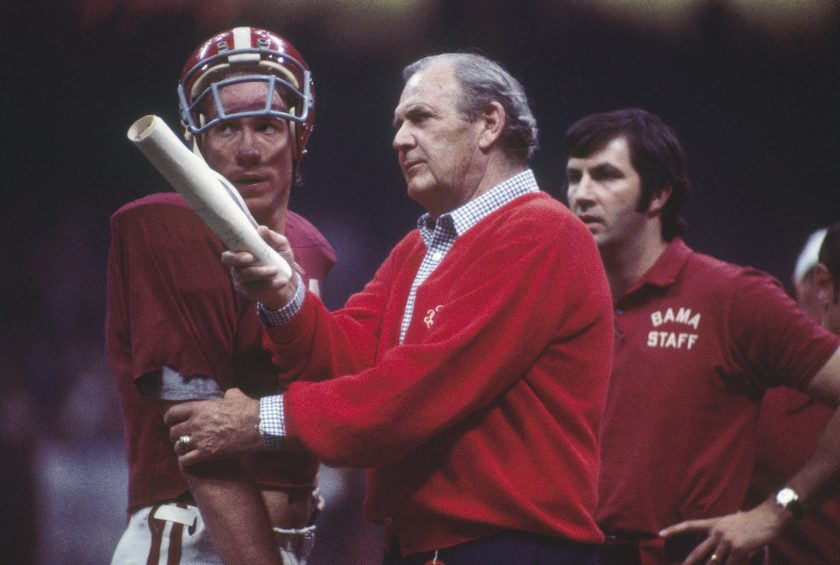 Alabama limped to an 8-4 record and sixth place in the SEC in 1982. The Crimson Tide lost to LSU and Tennessee, teams they'd beaten the previous 11 years.

Bryant, whose health declined rapidly during the 1970s due to heavy drinking and smoking habits, decided to retire at the end of that season. He coached in the Iron Bowl, losing 23-22 to Auburn, and finally against Illinois in the Liberty Bowl in Memphis.

The 69-year-old head football coach was then asked after the game what he'd do with his free time. This is a man who dedicated the last 25 years of his life to the University of Alabama. He won a national title as a player alongside Don Hutson in 1934 and six more as a coach at his alma mater. Alabama football was his life.

"Probably croak in a week."

Bryant was off by three weeks. Four weeks after the comment, he checked into Druid City Hospital in Tuscaloosa following some chest pain. He died of a massive heart attack the next day.

Did you know Paul "Bear" Bryant died exactly 40 years ago today? Bryant said he would "croak in a week" if he stopped coaching, and sure enough, he died 27 days after his final football game. pic.twitter.com/4ai5Zks5En

RELATED: The Wild Story of How Bear Bryant Earned His Nickname

Bryant's doctor William Hill said he was amazed that Bryant even coached at all over his last three years. He won two national titles over his last five seasons despite suffering a stroke and "mild heart failure."

"It makes his achievement the last few years all the more remarkable," Dr. Hill told the New York Times in 1983. "He was a very courageous man. I seriously doubt there are many people who could have overcome what he did in the last three years to accomplish the feat."

Everyone knew Bryant was a tough dude, but he was practically battling death while coaching his team to national championships.

Bryant's legacy still lives on today. His impact was felt around the world. The Bear touched everyone he coached, whether as an assistant coach at Vanderbilt or Georgia and North Carolina Pre-Flight Academy or as a head coach at Maryland, Kentucky, Texas A&M and Alabama. NFL greats like Ken Stabler and Joe Namath played under him, too.

While serving as head coach and athletic director at Texas A&M in the 1950s, he kicked his players' butts after a 1-9 season at a grueling training camp in Junction, Texas. Those who survived it were deemed "Junction Boys." Two years after that, the Aggies won the Southwest Conference championship.

37 years ago today , we lost the one of the best coaches in college football history...
Paul "Bear" Bryant...

Paul William Bryant, the kid from Moro Bottom, Arkansas, who played at Fordyce High School and met his future wife Mary Harmon in college became one of the best coaches in college football history.

Coach Bryant led Alabama to 24 straight bowl games, was a 12-time Southeastern Conference Coach of the Year and an obvious choice for the College Football Hall of Fame. The words he uttered just weeks before his death will always be ominous.

MORE: "The Bear Bryant Show" Taught Football Like Never Before