Sports is full of incredible and creative nicknames, and Alabama football is certainly no different.

Joe Namath took the football world by storm when he earned his "Broadway Joe" moniker. Kenny "Snake" Stabler ran in the mud like the slipperiest of serpentines. From Terrence Cody, AKA "Mount Cody," to Ozzie Newsome, AKA "The Wizard of Oz," there have been no shortage of terrific nicknames pass through Tuscaloosa.

But Crimson Tide fans know there's only one spot reserved for the greatest nickname in its program's history.

The best nicknames are those that contain a story or myth behind them, and there might not be a better story than that of legendary University of Alabama football coach Paul William Bryant, AKA "Bear" Bryant.

How Did Bear Bryant Get His Nickname? 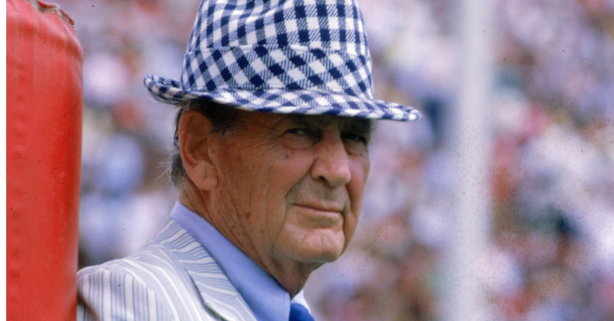 When he was 13, Bryant stood a ridiculous 6-foot-1, 180 pounds. That is massive for 13 years old. So massive that Bryant thought he could wrestle a muzzled bear.

As the story goes, the teenager was challenged to wrestle the imposing mammal at a carnival for $1. Bryant accepted and came away mostly unscathed (his ear was bitten), but the carnival never paid him. One dollar in 1926 is worth about $15 today. That was apparently too steep to pay.

Bear Bryant earned his nickname as a teen in Fordyce, AR by wrestling a bear when a traveling circus came thru town. pic.twitter.com/0k2R7RHO

RELATED: "The Bear Bryant Show" Taught Football Like Never Before

After earning the ursine nickname, Bryant lived up to it every step of his football career.

He won the 1930 Arkansas state championship at Fordyce High School as an offensive lineman and defensive end. Bryant played defensive end alongside NFL Hall-of-Famer Don Hutson at Alabama, where he was part of the 1934 national championship team and earned all-SEC honors. At Alabama, he met and married his wife, Mary Harmon.

As if Bryant wasn't badass enough, he turned down the head coaching gig at Arkansas in 1941 to join the Navy during World War II following the Pearl Harbor attack.

Bryant continued his football career as a head coach for the University of Maryland Terrapins, University of Kentucky Wildcats and Texas A&M Aggies before accepting the job in Tuscaloosa at his alma mater as both coach and athletic director. He coached numerous stars like New York Jets icon Joe Namath, Oakland Raiders' Kenny Stabler and 1957 Heisman Trophy winner John David Crow over his illustrious college coaching career.

He won an SEC title in 1950 at Kentucky but left because he was overshadowed by Adolph Rupp's dominant basketball teams. Bryant won a Southwest Conference championship in 1956 at TAMU, where he implemented his famous grueling training camp for football players dubbed the "Junction Boys."

Among the awards he earned throughout his lifetime include:

?It?s awfully important to win with humility. It?s also important to lose. I hate to lose worse than anyone, but if you never lose you won?t know how to act. If you lose with humility, then you can come back. ? - Coach Paul Bear Bryant pic.twitter.com/FYzpB7XzGf

Bryant suffered a fatal heart attack in 1983, just weeks after beating the University of Illinois in the Liberty Bowl and subsequently retired as the winningest college football coach ever. Bryant is buried at Elmwood Cemetery in Birmingham.

Paul "Bear" Bryant's days on the football field may just be pages in the college football history books now, but the nickname and the image of him donning a black-and-white houndstooth hat on the sidelines will forever live on to Alabamans and Americans all over.

This article was originally published August 19, 2019.