Bear Bryant’s Near-Death Story From His U.S. Navy Days Made Him a Hero 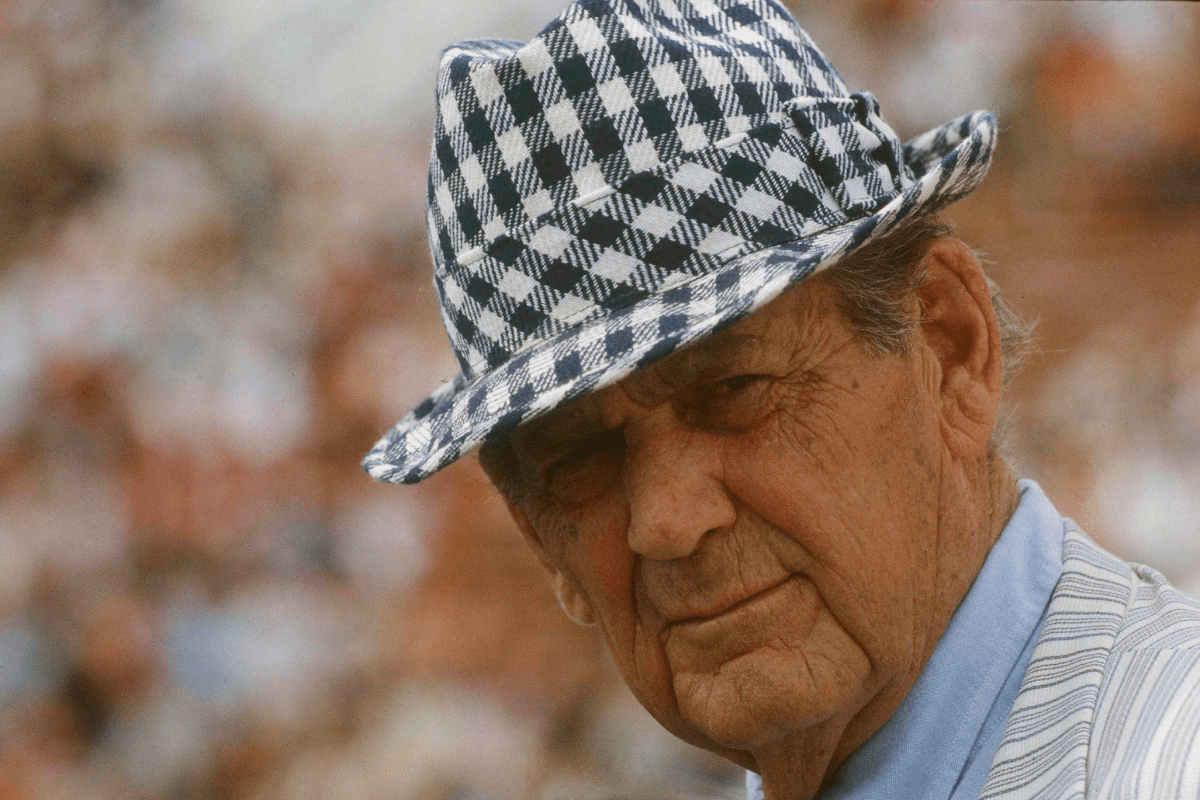 When the name Bear Bryant comes up in casual conversation, most fans picture the stern-faced, hard-nosed leader of the Alabama Crimson Tide with a rolled-up game plan and his iconic checkered houndstooth hat commanding everybody’s attention. The Hall-of-Famer was more than just a legendary college football coach, though. Bryant makes a strong case as the single-most badass human to ever walk the Earth.

At 13 years old, Paul William Bryant was 6-foot-1 and 180 pounds when he was challenged to wrestle a live bear at a carnival. Despite getting his ear bitten, Bryant wasn’t paid the $1 he was promised for the fight, but he did receive a nickname that stuck with him forever. The best part is, Bear was only just beginning his incredible life story.

Coming out of high school, Paul “Bear” Bryant received a scholarship to play for the University of Alabama football team, where he would earn All-SEC honors as an end in both 1934 and 1935. In his three seasons playing opposite NFL Hall of Fame receiver Don Hutson, Alabama compiled a 23-3-2 record and won the 1934 national championship. He was selected in the 1936 NFL Draft but decided not to pursue pro football and coach instead.

After several years working as an assistant coach, Bryant was in line to be head coach at the University of Arkansas before the attack on Pearl Harbor began America’s involvement in World War II. The Moro Bottom, Arkansas, native left football to serve his country as a member of the U.S. Navy, where he delivered one of the most heroic, American stories you’ll ever hear.

During World War II, the USS Uruguay ferried army troops to North Africa, Australia and Japan. In 1943, the Uruguay collided with an oil replenishment ship — the USS Salamonie — off the coast of Bermuda. When the Uruguay’s Captain ordered to abandon ship, Lieutenant Paul “Bear” Bryant decided to directly disobey his commanding officer and rushed to empty the forward fuel tanks, shifting the ship’s ballast and kept it from sinking. Hundreds of people died in the water that day, while those who listened to Bryant survived.

“Bryant, in the middle of a poker game, grabbed his canteen and gun… and ran topside. There he found hundreds of terrified soldiers, ‘praying, and I was leading ’em.’ There was an order to abandon ship; Bryant thought it was premature and disobeyed, urging others to do the same. The ones who listened to him lived. Two hundred other soldiers and sailors died in the water.”

— From “The Last Coach” by Allen Barra

Paul Bryant was awarded the Navy medal for his heroics. That leadership and courage led him to coach the Georgia and North Carolina Pre-Flight military football teams during the war, and his coaching aptitude only grew when he came home.

He returned to college football and won 91 games in 13 seasons with the University of Maryland Terrapins, University of Kentucky Wildcats and the Texas A&M Aggies — including the infamous “Junction Boys” season — before taking over on the University of Alabama’s sidelines in 1958.

Over the next 25 years, he brought 232 wins, only 46 losses, six NCAA national titles, 13 Southeastern Conference championships and 12 bowl game victories to his alma mater. He beat everyone from Auburn to Notre Dame to Oklahoma to Tennessee and Vanderbilt along the way.

Bryant received the AFCA Coach of the Year award three times, and the award is now named in his honor. If that’s not enough, the Crimson Tide football team’s current home is called Bryant-Denny Stadium.

Bryant died on January 26, 1983, after suffering a massive heart attack. The legendary head football coach was laid to rest in Birmingham, Alabama.

After his death, President Ronald Reagan awarded “The Bear” the Presidential Medal of Freedom.

Didn't realize this, but legendary Alabama football coach Paul "Bear: Bryant was posthumously awarded the Presidential Medal of Freedom in 1983 by Ronald Reagan. It feels like there's a wide berth for this honor. Seems to me like a "Hey, you're a famous American" type of honor.

The legacy that current coach Nick Saban is writing in Tuscaloosa is hard to ignore, but you cannot discredit what Bryant did during an era where social media didn’t help you recruit, players couldn’t easily travel thousands of miles to join the Crimson Tide, and the game was vastly different. For those reasons, Coach Bryant might still be the greatest leader in college football history regardless of what Saban does the rest of his career.

Plus, until Saban saves an entire Naval ship from sinking, he doesn’t have anything on the Bear.

This post was originally published February 20, 2019, but Bear Bryant will never stop being a complete and total badass.