Derrick Thomas’ 27 Sacks Deserves to Be the NCAA Record 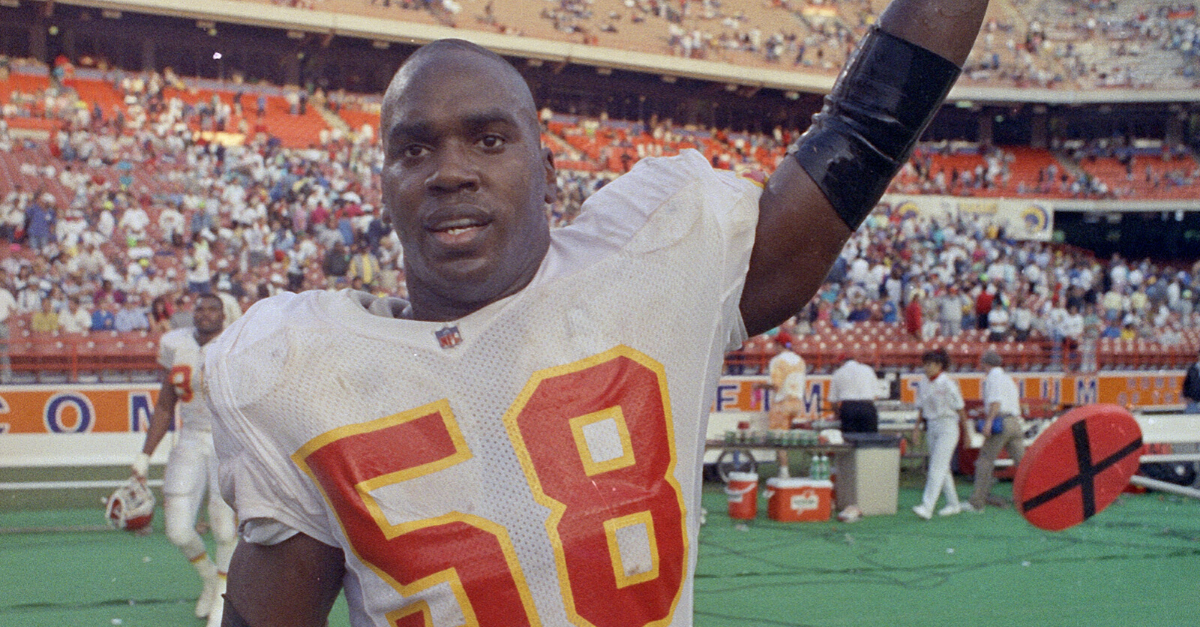 The NCAA did not recognize the ‘sack’ as an official statistic until 2000. Even the NFL ? which made it a stat in 1982 ? understood that sacking the quarterback while he’s attempting to pass is vital to a defense’s success and should have its own metric. New York Giants great Lawrence Taylor logged 9.5 sacks during his rookie season in 1981, but they don’t count towards his career total. Sadly, L.T. isn’t the only player who’s missing out because career-defining numbers aren’t counted, either.

No defender was more dominant in the history of college football than the late Derrick Thomas was for the Alabama Crimson Tide. Wearing No. 55, the Miami native terrorized defenses for three seasons in Tuscaloosa, but in 1988, he put on a show that likely will never be topped again.

What is the NCAA Sack Record?

Congratulations to Derrick Thomas! Alabama fans have voted you the best football player in program history. We'll never see 27 sacks in one season again. RIP to the G.O.A.T. pic.twitter.com/ttQxXOmAUZ

During that 1988 campaign under head coach Bill Curry, the Crimson Tide finished 9-3 and defeated Army in the Sun Bowl. Led by Thomas ? a unanimous All-American who finished 10th in the Heisman Trophy voting ? the University of Alabama’s defense allowed just 15.7 points per game and held their opponents to 10 or fewer points five times.

It certainly helps when your star player racks up an unthinkable 27 sacks in a single season, too.

The NCAA’s official record book lists Arizona State’s Terrell Suggs as the FBS-level’s record holder with 24.0 sacks in 2002. Worchester State’s Russ Watson is also tied with Suggs, regardless of division, with 24 sacks of his own at the Division III level in 2000.

No one is even close to what Thomas managed back in ’88.

For that matter, Thomas should hold the NCAA record for career sacks, but he doesn’t. In three seasons, he recorded 52.0 sacks, which are seven more than the current FBS record of 45.0 held by Louisiana Tech’s Jaylon Ferguson.

Thomas’ highlights of that 1988 season look like someone playing Madden on rookie mode. He was bigger, faster and stronger than everybody on the field. In his final regular season game against Texas A&M, Thomas had five sacks and recovered a fumble to stamp his legacy that this season is still the greatest ever.

Thomas went on to be the fourth-overall pick in the 1989 NFL Draft and played 11 Hall-of-Fame seasons of pro football wearing No. 58 for the Kansas City Chiefs. The linebacker made the Pro Bowl nine times, recorded 126.5 career sacks as one of the best pass rushers ever. Thomas was named the NFL Man of the Year in 1993, which honors one pro football player per year for their charity work and volunteering in the community.

On November 11, 1990, Thomas set the NFL record with seven sacks in a single game against the Seattle Seahawks.

Whether the NCAA wants to do the research or not, conferences keep their own statistics, and the SEC record book lists Thomas with the all-time conference record. Why the NCAA will not give a transcendent player like Derrick Thomas his rightful place on the mountaintop makes no sense.

It’s time to honor one of the all-time greats and recognize No. 55 for his untouchable records.

This article was originally published February 15, 2019.

MORE: Crazy Fans are Everywhere, But This Guy Will Forever Be Alabama’s Greatest