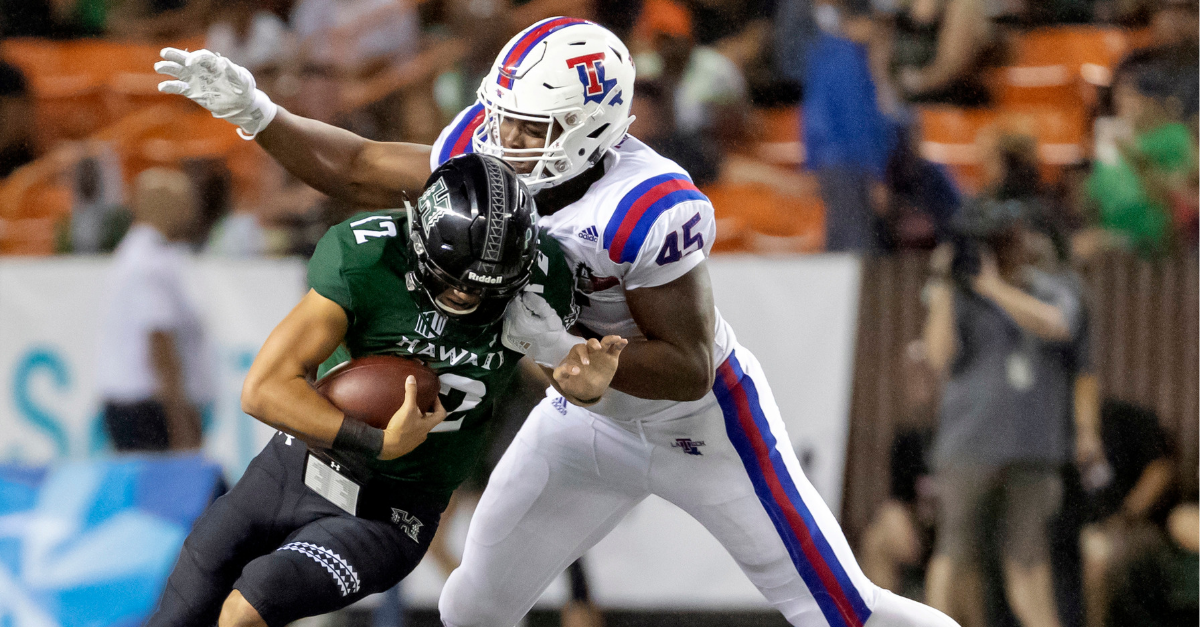 When it comes to getting an NFL Scouting Combine invite, the criteria is pretty simple. If you are a good college football player, there?s a strong chance you will get an opportunity to compete at the annual event. If you have been in trouble before, you won?t be in Indianapolis.

Earlier this year, both Mississippi State defensive tackle Jeffery Simmons and Colorado State wide receiver Preston Williams were told they won?t be invited to the NFL Combine because they didn?t meet the criteria under the NFL?s policy about past issues involving violence. Now, it?s time to add another name to the last.

Louisiana Tech defensive end Jaylon Ferguson, the NCAA?s all-time sack leader, had his invite rescinded because he was convicted of simple battery at a McDonald?s during this freshman year with the Bulldogs in Ruston, Louisiana.

A deeper dive into a background check has cost the pass rusher and potential first-round pick in this spring?s draft to compete against other NFL Draft hopefuls on Sunday, March 4 at Lucas Oil Field in Indiana.

A strong statement from agent Safarrah Lawson on #LaTech prospect Jaylon Ferguson, whose invite to the Combine was rescinded yesterday. pic.twitter.com/KuETpnVhAO

RELATED: Top NFL Prospect Loses Millions of Dollars Even Before the Draft

Although the 6-foot-5, 260-pound Ferguson never had any further trouble and excelled on the gridiron by making college football with 45 sacks in his four seasons, rules are rules and the NFL obviously isn?t backing down from taking away his combine invitation.

Ferguson broke the FBS sack record in the 2018 Hawaii Bowl, where he was named the game?s MVP, but that doesn?t matter and he was disinvited, which his agent, Saffarah Lawson, thought was rather harsh and shared a statement with NFL Network?s Ian Rapoport.

?We disagree with the NFL?s position with regards to Jaylon Ferguson. Jaylon is a great person who made a mistake 4 years ago before he started playing college football. He was involved in a scuffle that resulted in him being charged with misdemeanor simple battery. He received deferred judgement and $189.00 fine, a proper punishment for a fight between two teenagers.

?Since that day Jaylon has been a fine and upstanding student athlete that personifies the things we are trying to teach our young people today. The past four years at Louisiana Tech, Jaylon has been a team leader who has led on and off the field learning learning from the lessons of his past.

?As opposed to penalizing and vilifying the future players of the league, we would hope the league would allow Jaylon and other similarly situated players the opportunity to prove to potential employers that they are remorseful, and have learned from their mistakes, accepted responsibility, want to be good role models and are better people now for it.

?No person is perfect, and people are entitled to second chances and opportunities and one would hope the NFL as an open minded Industry Leader, Diverse League and Business would want to see the best in their players, educate them and help them mature, learn and be better people.?

Lawson makes a valid point. People oftentimes make mistakes as teenagers and want to be able to prove to their future employers that the past is the past and it won?t happen again.

Jaylon Ferguson will just have to wait a little longer until after the NFL Scouting Combine.