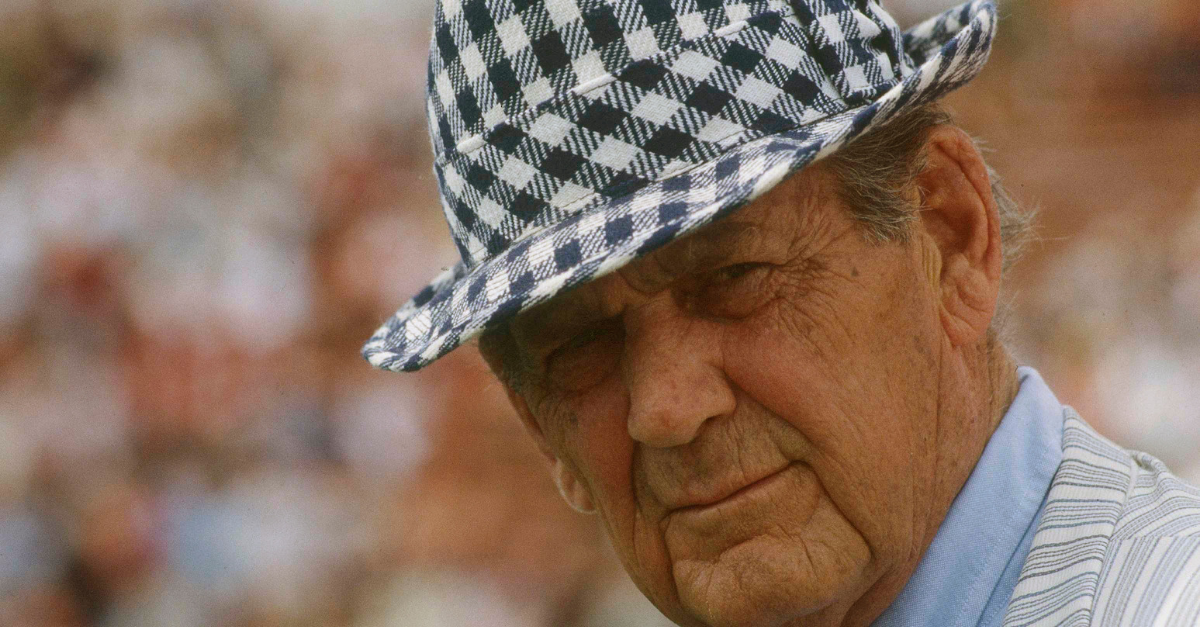 The University of Alabama and Auburn University are separated by less than three hours in a car, and this in-state rivalry is one of the fiercest in all of college athletics. When it comes to college football though, the Iron Bowl takes on a live of its own, and this rivalry is full of iconic moments.

The first game between the Alabama Crimson Tide and Auburn Tigers came on February 22, 1983, when Auburn won the game, 32-22. Since then, hundreds of NFL players have competed in this game led by a few legendary head coaches. One, though, stands above the rest as the greatest coach to ever walk the Iron Bowl sidelines, and his crowning moment came in this game back in 1981.

Alabama head coach Paul “Bear” Bryant coached in Tuscaloosa from 1958 until 1983, winning 323 of the 425 games he coached. In 1961, just his fourth season at the helm, Bryant’s Crimson Tide turned in an undefeated season and the first of his six national championships.

Bryant’s team went 19-6 when playing Auburn during his tenure, but none of them held quite the same significance as the 1981 Iron Bowl matchup.

Heading into that SEC game, the fourth-ranked Crimson Tide were riding an eight-game unbeaten streak with a record of 8-1-1, and Bear Bryant was tied with Amos Alonzo Stagg with 314 career wins, the most all-time.

Auburn was 5-5 and coming off a loss to the Georgia Bulldogs the previous week. All that was left for head coach Pat Dye and Auburn football was to play spoiler against their rival, snap an eight-game losing streak against Alabama, and finish the season with a winning record.

History wasn’t going to let the Tigers win that day, though.

At Legion Field in Birmingham, Alabama, Paul “Bear” Bryant became the winningest coach in college football history and notched career victory No. 315, as his team rallied from a 17-14 deficit in the fourth quarter to beat Auburn 28-17 — It was the ninth win in a row for the Crimson Tide, which is still the longest streak in Iron Bowl history.

1981 Iron Bowl 28-17. Coach Bryant's 315th win. At the time setting the record for most wins by a Coach. Awesome game, electric atmosphere🏈🐘 pic.twitter.com/4p9xabdRzs

Bryant retired from coaching following the 1983 season, and he later died of a heart attack that same year. His time as the Alabama football head coach is defined by six national titles, but his teams’ dominance of the Iron Bowl is something that will stand the tests of time in a rivalry of this magnitude.

The following year, an Auburn legend ended this winning streak when running back Bo Jackson famously went “over the top” to score and knock off the Crimson Tide for the first time in almost a decade.

Despite losing to Texas in the Cotton Bowl, 1981 was Alabama’s year once again, and it was the moment an iconic football coach became the king of major college football and cemented his name among the greatest in Alabama history.