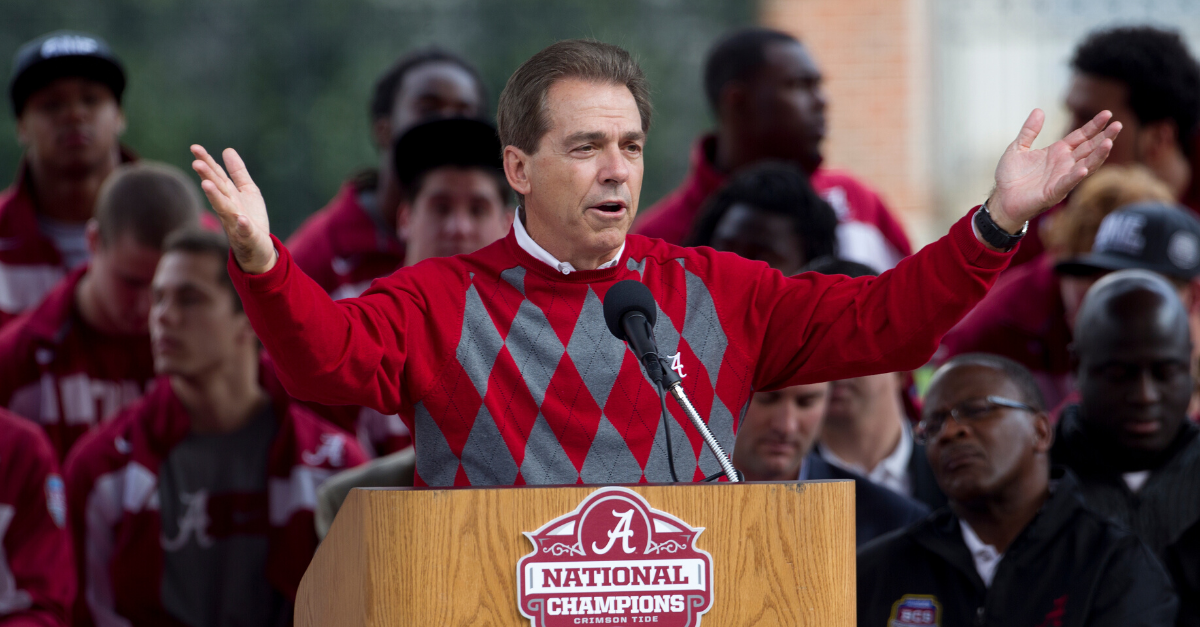 Every summer at the Talladega Superspeedway, NASCAR’s GEICO 500 brings the fastest race of the season to Lincoln, Alabama. As you’d imagine, there are plenty of Alabama Crimson Tide fans in attendance each year. And sure, there’s probably an equal amount of Auburn Tigers wearing burnt orange and navy blue as well.

In the sweltering Alabama heat, it’s not uncommon for race fans to lose their shirt and get a little sun on their backs. Well, during the 2017 race when Ricky Stenhouse Jr. took the checkered flag, one Alabama football fan was captured while shirtless with his giant back tattoo of head coach Nick Saban, as well as a list of Alabama’s many college football national championships, for the world to see. And yes, it’s every bit as amazing as it sounds.

The man was later identified as Jason McMillan, a life-long Crimson Tide fan from Muscle Shoals, Alabama. After his glorious work of art was capt ured by someone at the race, FoxSports‘ Clay Travis unveiled it to the world through a reader email tip, and every Alabama fan found their newest hero.

RELATED: Tom Brady Autographs Crazed Fan’s Arm, Then She Gets It Tattooed

The tattoo, which Yahoo! Sports reported was done by Byron Phillips, depicts the unmistakable “A” logo, all of the Crimson Tide’s national championship titles throughout the years, and the iconic bust of Nick Saban.

“Every time I go to Talladega, I take my shirt off because it is so dang gum hot,” McMillan told AL.com back in 2017. “Someone behind me took a picture and put it on Twitter. It amazed me. People were telling me I’m breaking the Internet. At least I can say I was famous for a day.”

The only downside of this montage? McMillan was missing the Crimson Tide’s 2015 national title season when he became internet famous, but he told AL.com that a few additions, including two of Alabama’s top players ever ? Heisman Trophy winners Mark Ingram and Derrick Henry ? were coming to complete the masterpiece.

With Saban’s face always on his back, McMillan may have staked his claim as Alabama’s biggest fan of all-time.

This article was originally published January 24, 2019.