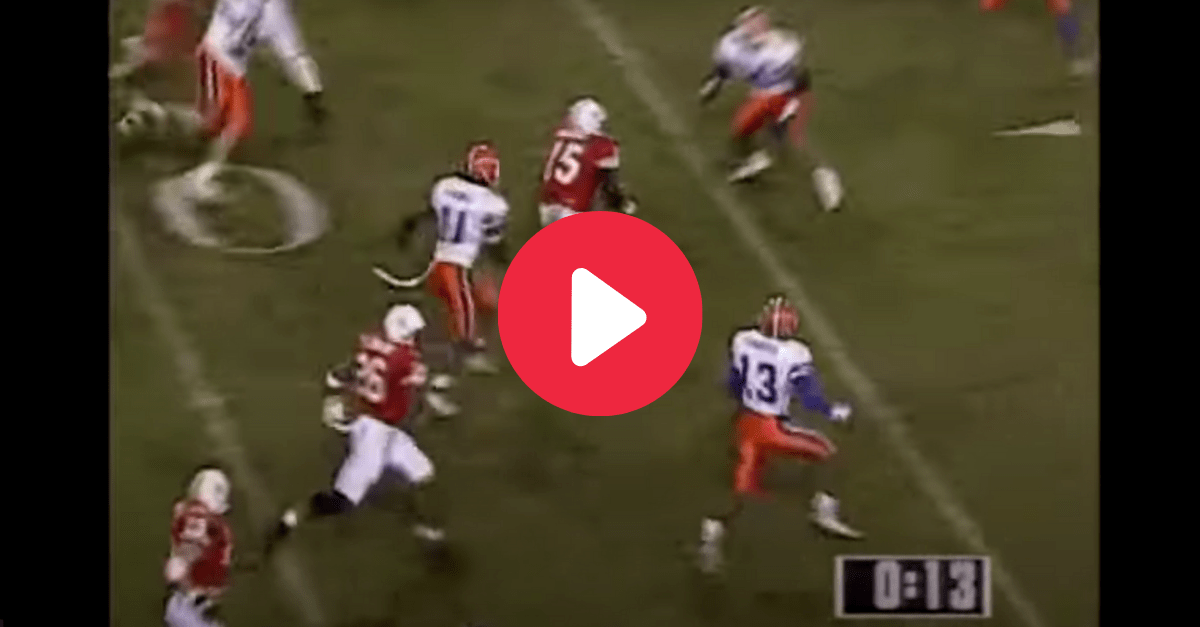 There have been few players in college football history to find more success than Tommie Frazier when he was the quarterback of the Nebraska Cornhuskers. Yet, due to health concerns, he wasn’t drafted by an NFL team in 1996.

Frazier, an electric dual-threat signal caller, never had much of an opportunity at a professional career. So is he the best college football player to never get drafted? I’d say definitely. After all, he is thought to be one of the best players in NCAA history.

As one of the most successful quarterbacks in college football history, Frazier and head coach Tom Osborne led the Nebraska football team to three National Championship games with two victories. Frazier was also named the MVP in all three contests.

Frazier also won the Big Eight Freshman of the Year award for his play in 1992 football season after taking over as the first-team quarterback for Mike Grant and Big Eight Offensive Player of the Year in 1995 on what many consider as one of the best college football teams of all time.

Frazier was dominant as a Husker with a 45-4 career record. He also went 4-0 against Big Eight rival Oklahoma and 4-0 against Colorado, who was ranked in the top -0 for three of the meetings and 20th in the other.

In 1999, when Sports Illustrated created the “NCAA College Football All-Century Team,” Frazier was selected as the backup quarterback on that team. Not bad for a player who wasn’t even drafted.

The former Nebraska quarterback was not known for his ability to throw the ball, but his playmaking on the ground. In 35 career games, Frazier threw the ball 469 times compared to 342 rushing attempts.

At the end of the day, however, it wasn’t his ability on the field that scared teams away.

Did Tommie Frazier Win the Heisman?

Tommie Frazier was nothing short of dominant when he was on the field for the Huskers. He was in the perfect offense for a quarterback with his athletic ability. Leading the triple-option attack with a stable of talented running backs put Frazier in the best possible position for success.

During the 1995 season, he added on to his ability to run the ball by completing a career-best 56.4 percent of his passes. He also had career-highs in passing yards, touchdowns, and passer rating. This should have been enough as the quarterback of the best team in the country to bring home the Heisman Trophy.

However, by just under 300 points in the voting, Ohio State running back Eddie George won the 1995 Heisman Trophy instead. As a Consensus All-American, many think Frazier, the runner-up, was robbed of the award. If the voting was done after the bowl game, there is a good chance the voting would have gone a little differently.

Tommie Frazier did end his college career with one of the best plays in the history of college football. In the 1996 Tostitos Fiesta Bowl against the Florida Gators, Frazier ran the triple-option and got about 10 yards up the field before running into a wall of Florida players. But he continued pumping his legs and broke free from the defensive players to run for a career-high 75-yard touchdown.

Frazier ended the game as the National Championship MVP for the third-consecutive season with 16 rushes for 199 yards and two touchdowns, and completed six of 14 passes for 105 yards and a touchdown.

What Happened to Tommie Frazier?

During the 1994 season, Frazier began the season as one of the best players in the country, but only played in four games because of blood clots in his legs. He was able to return for the Orange Bowl against the Miami Hurricanes and lead the team to a National Championship.

That was the last time he would experience that problem at Nebraska, but it didn’t just go away. Throughout the draft process, including at the NFL Draft Combine, he had more troubles with blood clots and led to a poor performance in front of scouts.

In the mid 90’s, his sub-50 percent completion percentage was probably enough to scare teams away, but throwing in a medical issue like blood clots that could take him off the field for long periods of time was what brought an end to Frazier’s NFL dream.

Instead, he headed to the Canadian Football League.

Frazier didn’t last long in the CFL, playing in just one game before being hospitalized for blood clots. He retired soon after his release.

In 2013, Frazier was inducted into the College Football Hall of Fame.

This article was originally published July 23, 2019. We still haven’t seen a run quite like this.

MORE: “The Play” Stands Alone as CFB’s Most Dramatic Ending