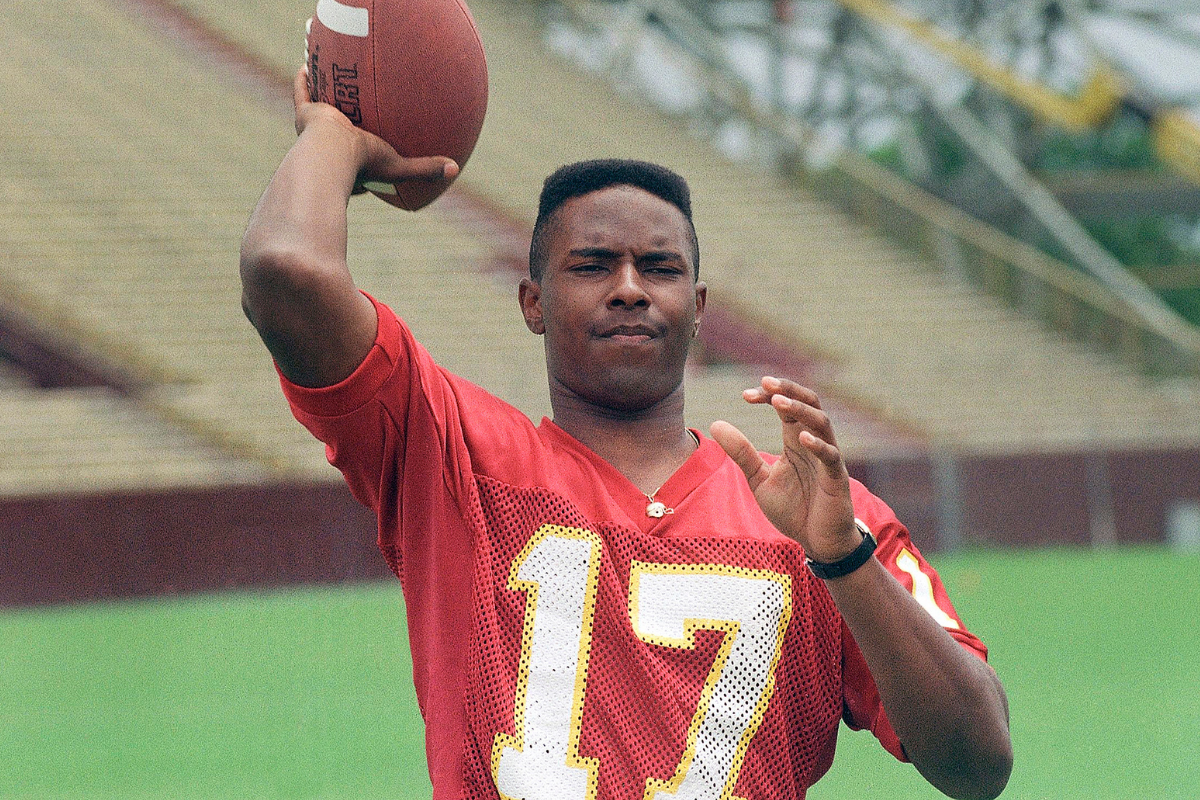 Every so often, a transcendent NCAA athlete has their choice of which sport they could play at the professional level. The 1993 Heisman Trophy winner, Charlie Ward, Jr., was one of them with the ability to play in either the National Football League or National Basketball Association.

Although Ward could have found success in the NFL as a quarterback, Ward ultimately chose to play in the NBA and enjoyed a 12-year career. But what would’ve happened if the FSU legend opted for football instead of basketball?

Despite winning the Heisman Trophy, Davey O’Brien Award (given to college football’s top quarterback), and a National Championship with the Florida State Seminoles at the 1994 Orange Bowl against Nebraska, Ward still went undrafted in the 1994 NFL Draft after his sensational senior year.

At the time, NFL teams across the United States were scared off by things like Ward’s “smaller stature” (despite being listed at 6-foot-2 and around 190 pounds) and his arm strength, but the biggest concern was that college football’s player of the year would pursue a basketball career and teams would waste a pick on a player who might never play football.

During his college basketball career as a point guard in Tallahassee, he averaged 8.1 points, 4.4 assists, and 3.1 rebounds for the Seminoles basketball team. His senior season was his best scoring year, averaging 10.5 points as well as 4.9 assists and 3.9 rebounds.

One of the controversial factors to Ward’s decision, at the time, was his skin color. There were examples of successful black quarterbacks such as Warren Moon and Randall Cunningham, but teams weren’t lining up to find the next great black QB in 1994.

Even Super Bowl MVP Doug Williams explained in his biography that NFL GM’s and coaches had a black-quarterback syndrome during that era:

“It boils down to the fact that most N.F.L. coaches, general managers and owners are scared of black quarterbacks or they just don’t want a black man running their team, period,” Williams said. “They’re afraid if they play a black quarterback and he doesn’t pan out, they’re going to be ridiculed by their peers. People around the league will say, ‘I told you that black guy couldn’t play.’

Ward ultimately chose to play in the National Basketball Association after being selected in the first round (No. 26 overall) in the 1994 NBA Draft by the New York Knicks.

What would have happened though if Ward had committed to being a football player and possibly been a mid-round draft pick in the NFL?

Ward showed during his final two seasons under head coach Bobby Bowden at Florida State University that he not only had great athleticism, but elite arm talent. As a senior, he completed 69.5 percent of his passes for 3,032 yards, 27 touchdowns and just four interceptions. He also rushed for 339 yards and four touchdowns.

Ward was considered a scrambling quarterback by NFL scouts even though he wasn’t a run-first player in college. In his final two seasons at FSU, Ward had just 165 rushing attempts, or 7.5 attempts per game.

RELATED: The 12 Greatest ‘Noles to Ever Play at Florida State

Even a player like Warren Moon, one of the best quarterbacks in NFL history, struggled at first to find a spot in the NFL, playing six seasons in the Canadian Football League before finally making the jump to the Houston Oilers.

Black quarterbacks still go through the same criticism today, even if there are no tangible facts behind it. An example was during the lead-up to the 2019 NFL Draft when ESPN’s Stephen A. Smith stated that former Ohio State quarterback Dwayne Haskins was more of a running quarterback than a throwing quarterback, which was completely false, but just an assumption.

QB Dwayne Haskins, who is a "running QB" per @stephenasmith, ran 5.04, 40 time.pic.twitter.com/zHjA24wiIP

I really do think Ward had the talent to be a starting quarterback in the NFL. But would the Heisman winner really have received a fair shot? NFL coaches and general managers were afraid of him passing on their teams and didn’t draft the guy who was named the best player in college football only a few months prior.

Due to being a little over six feet tall, even if he fully committed to playing quarterback, he was only seen a third to fifth-round pick, which in hindsight is ridiculous with the other quarterbacks taken in that ’94 draft.

“Who the hell is Mel Kiper?”

Here is the full list of quarterbacks taken in that 1994 NFL Draft:

With the way NFL teams looked at Ward and how his career as a basketball player turned out, Ward probably made the right choice. He played 12 seasons as an NBA guard, averaging 6.3 points and 4.0 assists. He also averaged 5.5 points and 3.7 rebounds in seven NBA Playoff appearances.

For 10-plus seasons of his career, Ward played for the Knicks, gaining significant playing time once assistant coach Jeff Van Gundy took over as head coach. That was followed by short stints on the Houston Rockets and San Antonio Spurs to end his professional career. He was never voted as an NBA All-Star.

One of his most memorable moments in the NBA came against the Miami Heat in the Eastern Conference Finals, when he was body-slammed by P.J. Brown that led to a brawl and suspensions of multiple Knicks players.

Ward could easily have carved a niche as an NFL quarterback, but the game wasn’t prepared to take on his skillset. If Ward would have entered the NFL 10 years later, I think he could have been a really good player who was given the reigns quickly.

In 2019, after completing almost 70 percent of his passes and showcasing elite athleticism, Kyler Murray was able to become top-10 pick in two different sports, something Ward wasn’t even considered as in 1994. Like Murray, Ward had the opportunity to play professional baseball as well.

Even though he didn’t play baseball in the ACC at Florida State, Ward played in high school at Thomasville County Central in Georgia and was selected in both the 1993 and 1994 drafts by the Milwaukee Brewers and New York Yankees, respectively. Even though he is from the state of Georgia, Ward was inducted into the Florida Sports Hall of Fame and the College Football Hall of Fame in 2006.

Ward went on to coach high school football at Westbury Christian School in Houston and Booker T. Washington High School in Northwest Florida. He resigned at Washington back in 2018 to became an ambassador to the FSU football program. He and his wife, Tonja, have three children together.

Charlie Ward held a respectable professional career in the NBA and even played in the 1999 NBA Finals, but his choice to pass on the NFL remains a huge question mark in the history books. To this day, he’s the only Heisman Trophy winner to play in the NBA.

This article was originally published July 19, 2019.