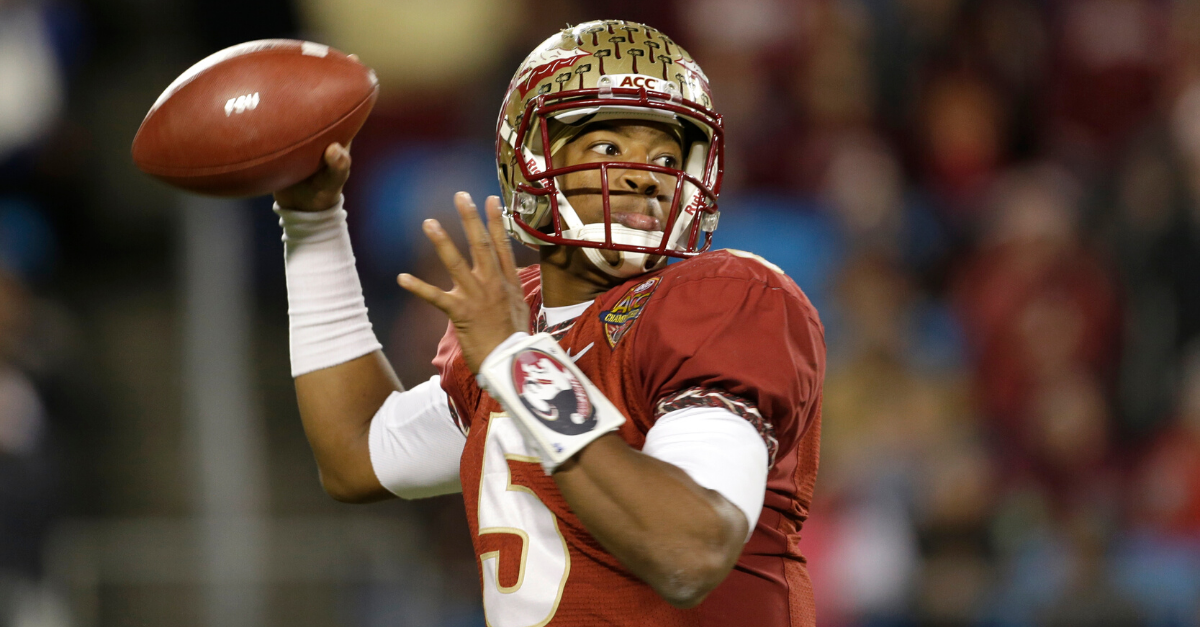 As the Florida State Seminoles hit the reset button after firing Willie Taggart and hiring head coach Mike Norvell, the rich history of starting quarterbacks for the ‘Noles seems like a distant memory. The next Chris Weinke might not be on FSU football’s roster right now, but it’s players like that who give hope that Florida State can and will find the program’s next, great quarterback.

In the history of the Seminoles’ football team, there have been extremely talented QBs, including three Heisman Trophy winners, but what have been the best games played by a quarterback in Seminoles history? Of the top 10, many of those spots are filled by Heisman winners.

Chris Weinke with one of the greatest play action plays at Florida State.

The most recent performance to nearly on this list was FSU quarterback, James Blackman. In his only start of the 2018 NCAA college football season, Blackman threw for 421 yards against Louisville. He didn’t threw for 400 yards during a game in 2019.

Of the top-10 passing games in Tallahassee, Chris Weinke accounts for four of them during his 2000 Heisman Trophy season under head coach Bobby Bowden on the sideliine, and he is the only player to appear on this list of the top 10 performances of passing yards in a single game more than once.

In the second game of the 2000 season and ACC opener, the Seminoles dodged an upset thanks to Weinke’s career night when he completed 25-of-38 for 443 yards and two touchdown passes.

Possibly one of the program’s best regular-season wins ever came in 2013, when the ‘Noles moved to 6-0 with a 51-13 win over the sixth-ranked Clemson Tigers. Winston, the All-American who would eventually win the Heisman and lead the team to the BCS National Championship, completed 22-of-34 attempts for 444 yards, three touchdowns, and one interception.

The main targets for Winston were wide receivers Nick O’Leary and Rashad Greene, who combined for 307 yards and two touchdowns on 13 catches.

The highlight of Charlie Ward’s Heisman Trophy season, the first in school history, came when he completed 38-of-53 attempts for 446 yards and four touchdowns against the arch-rival Florida Gators in Gainesville.

A big chunk of the yardage came late in the fourth quarter. On third down, Ward eluded two Gator defenders and found freshman running back Warrick Dunn on the left before he ran 79 yards to the end zone to put the Seminoles up by two scores.

This is just one of three times on the list that Florida State lost the football game. It was also the first time the Seminoles lost an ACC game since joining the conference and winning their first 29 in a row. Kanell did throw for 454 yards, but he only completed 32-of-67 passes attempts to go with three touchdowns and three interceptions.

In by far his best career game, Busby beat the Wolfpack to become 8-0 on the 1997 season while completing 26-of-36 attempts for 463 yards, five touchdowns and one interception at Doak Campbell Stadium. Busby, who never played in the NFL, threw for at least 390 yards three different times during the 1997 season and finished with the school record for passing yards in a season with 3,317 yards, though it has been passed five different times.

With six days remaining until the start of #FSU football, we remember former #Noles' quarterback Peter Tom Willis and his school-record six touchdown passes in a 1989 win over Memphis. I see ya, Peter Tom: https://t.co/bhBXld6Oe0 #NoleNation pic.twitter.com/jnD0JMgF2k

Not only did Willis throw for then-second most yards in a game for a Florida State quarterback, but he also set a record with six passing touchdowns against Memphis State. In his best game of his career, Willis completed 23-of-31 passes for 482 yards, six touchdowns and no interceptions. He spread the ball around well since the only player to top 100 yards in the game was Bruce LaSane, who caught six passes for 111 yards and one touchdown.

In the only regular season loss of the season for Florida State football in 2000, Weinke was pretty good against seventh-ranked Miami Hurricanes, but only completed half his attempts and threw two interceptions to go along with his 496 yards and three touchdowns.

It may be third as far as amount of yards, but this is probably the most impressive. Cappleman threw for 508 yards well before any other football players on this list. In 1969, Cappleman threw for more than 300 yards just twice and only finished the season with 2,467 yards, though that came in just 10 games.

In the game when he set the school’s passing record, which he held for 31 years, he completed 31-of-50 attempts for 508 yards, three touchdowns and two interceptions in a 28-26 loss.

In a matchup of top-10 teams, Weinke and Florida State showed why they were one of the favorites in the preseason to battle for a national title. The ‘Noles beat the tenth-ranked Clemson Tigers 54-7 thanks to their star quarterback passing for over 500 yards for the second time in four games.

Weinke completed 27-of-43 passes for 521 yards, two touchdowns and no interceptions. FSU had three players go over 100 yards with Snoop Minnis leading the way with 163 yards and a touchdown on four receptions.

A week after losing to Miami, Weinke came out and showed he wasn’t happy with the loss and rewrote the record book against the Duke Blue Devils. He had his best game of the season with completion percentage, yards, and touchdowns. He completed 37-of-47 attempts for a school-record 536 yards with five touchdowns and one interception.

Somehow, not one wide receiver broke the 100-yard mark with Jeff Chaney finishing with 99 yards and Robert Morgan with 98 yards and a touchdown.

FSU football has been a big part of college football history, from second-half comebacks to incredible touchdown runs to iconic catches made by stars like Peter Warrick. However, it’s hard to top some of these passing numbers when talking about the greatest performances in school history.