Kyler Murray’s Measurements Are In, But Should They Really Matter? 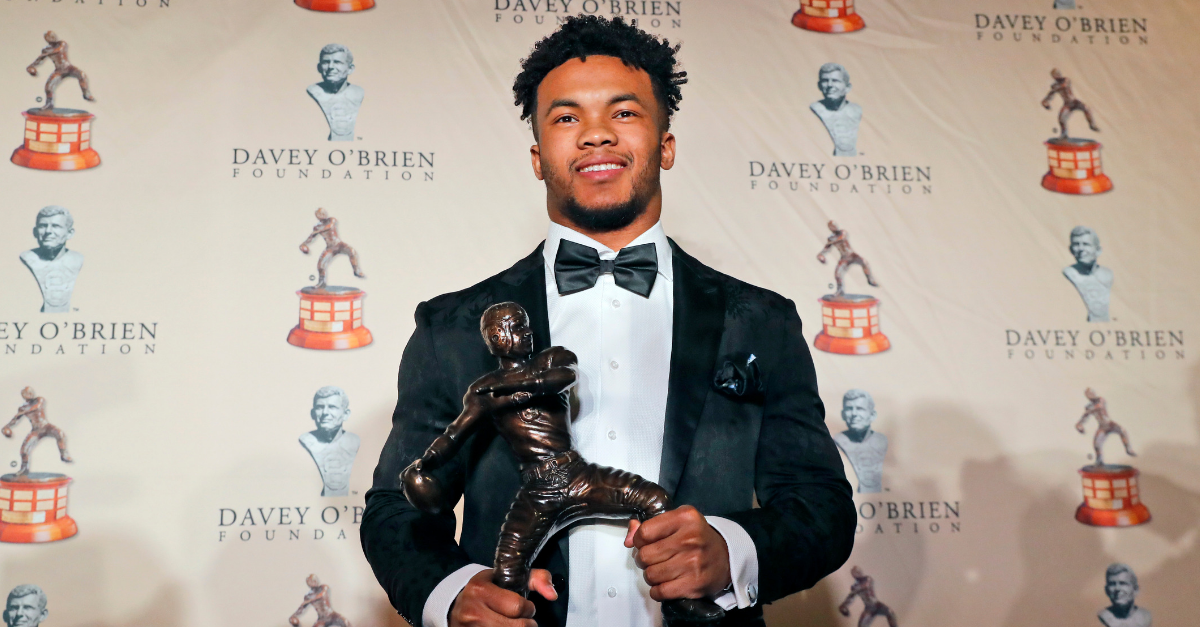 INDIANAPOLIS (AP) ? Kyler Murray may not show off his arm or his legs at the NFL scouting combine, but on Thursday he assuaged colossal concerns about his size.

The Heisman Trophy-winning dual-threat quarterback and speedy outfielder from the University of Oklahoma checked in at just over 5-feet-10 and 207 pounds with a hand size, as measured from his pinkie to his thumb, of 9½ inches.

Although he’s the shortest quarterback measured at the combine since 2003, those numbers were welcome news for Murray, the executives and coaches gathered in Indianapolis and fans wondering how his size would affect his draft stock.

Murray is heavier than Russell Wilson was at the 2012 combine and his hands measured larger than Baker Mayfield's did at last year's combine. pic.twitter.com/zXCXxvmP4e

Murray compares favorably to Wilson in 2012 and Baker Mayfield, last year’s top overall draft pick. Murray is a half-inch shorter but three pounds heavier than Wilson, and his hand is a quarter inch larger than Mayfield’s.

Murray’s measurements might be his most significant results at the combine because he is not expected to throw or compete in any other quarterback drills at Lucas Oil Stadium this week.

After signing a contract with a $4.66 million signing bonus as the ninth overall pick in June by baseball’s Oakland Athletics, Murray led Oklahoma to the College Football Playoff in his only season as the starter while posting the second-best passer efficiency rating in Bowl Subdivision history.

Before throwing for 4,361 yards and 42 touchdowns and running for 1,001 yards and 12 scores, Murray’s only extensive college experience was a rough freshman season at Texas A&M in 2015. After transferring to Oklahoma, he was the backup to Mayfield.

Murray announced a few weeks ago he was choosing the gridiron over the diamond .

How much Murray’s size will factor into his success in the NFL is a matter of great speculation among the league’s talent evaluators.

“I think it’s been proven to not be as much of a factor as maybe it was years ago,” Los Angeles Raiders coach Jon Gruden said. “I don’t know that it’s a true impact on the position or the performance.”

While size may not matter, Denver Broncos general manager John Elway suggested that the system certainly does. He said shorter quarterbacks see the field better out of the shotgun, and most of this year’s class, including Murray, has taken only a handful of snaps from under center in college.

The problem is, NFL teams typically mix it up, putting the QB under center at least occasionally to balance the offense, empower the ground game and keep defenses guessing.

“That’s where height does matter a little bit more,” said Elway, who, at 6-3, was adept in either formation. “But if you’re playing in shotgun every down like a lot of these guys, then the height, to me, does not have nearly the impact that it normally would if you’re coming out from underneath.”

Murray is the most intriguing of the more than 330 prospects at this year’s combine .

“Like the rest of the league, I think the kid is fascinating,” Raiders general manager Mike Mayock said. “It’s kind of where are we going as a league at the quarterback position. Is he too small? Is he dynamic? I think we’re all trying to figure him out. I think all 32 teams in the league are trying to figure out the entire position.”

Tampa Bay Buccaneers coach Bruce Arians said speed trumps size at quarterback in today’s NFL with all the run-pass option plays and other trickery that has seeped in from the spread systems in college.

“I don’t think you can hit someone you can’t catch,” Arians said. “I look forward to his workout and seeing his talent. I think Baker killed that myth a little bit about being too short. Oklahoma has a really tall offensive line, so he’s used to that.”

Seattle Seahawks general manager John Schneider said shorter QBs “have to have the feet, the eyes and the quickness to locate secondary receivers really quick. They have to be able to move and get in the passing lanes.”

Shurmur said what impressed him while looking at Murray’s 2018 tapes was that “for a sub-6-foot player, he had only five balls batted down.”

“That’s why I say you’ve got to really look at the player and how he competed, how he helped his team win games, how he moved his feet,” Shurmur said. “You’ve got to look at all of it and then factor it in and decide if that player is for you.”