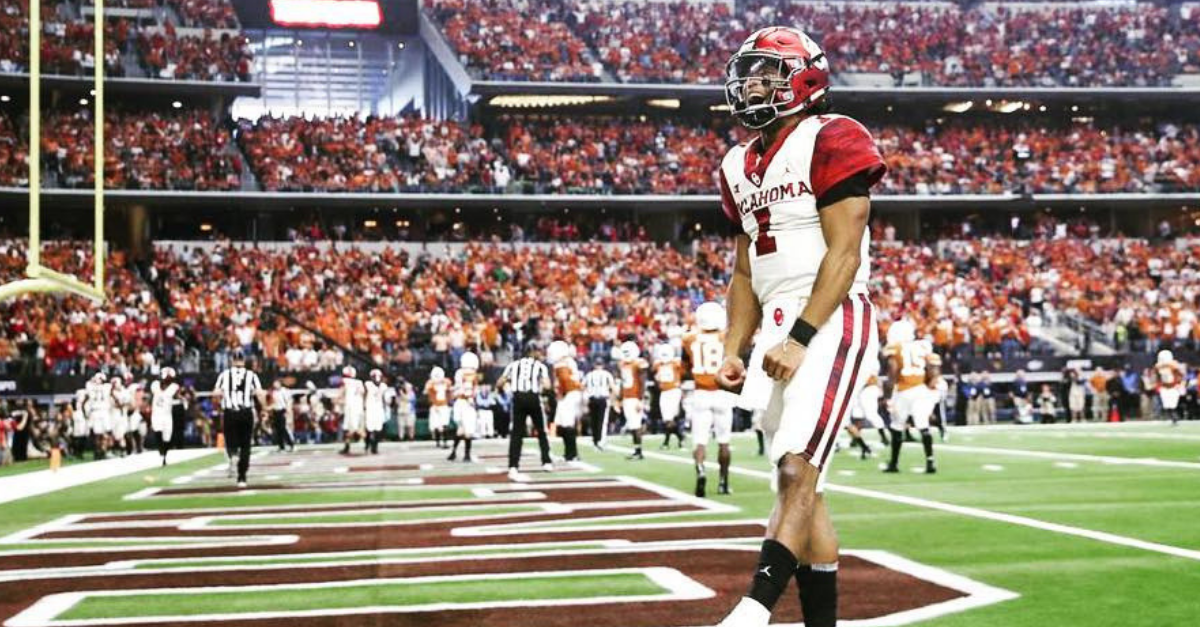 After everyone stamped Oklahoma quarterback Kyler Murray as the future star in the Oakland Athletics‘ professional baseball club, the Heisman Trophy winner is making us look just like he made the entire Big 12 Conference last season: foolish.

According to Susan Slusser of the San Francisco Chronicle, multiple people inside the A’s organization expect Kyler Murray, the ninth-overall draft pick in the 2018 MLB Draft, to declare for the upcoming NFL Draft. Yeah, the 5-foot-10, larger-than-life, two-sport athlete is going to be available when the Arizona Cardinals are on the clock to start April’s NFL Draft.

UPDATE: On Monday afternoon, the former Heisman winner of the Oklahoma Sooners made it official by declaring for the upcoming 2019 NFL Draft via Twitter.

I have declared for the NFL Draft.

The 21-year-old will look to test his metal in the NFL, and he could very easily be selected as a first-round pick. If he does ultimately choose football over baseball, the Heisman Trophy winner would have to return his $4.66 million signing bonus for rejecting the A’s contract. Should Murray declare, he still has the chance to play baseball if he chooses, but that would mean he’d have to report to spring training on February 15.

With the NFL combine just two weeks after that date, the clock is ticking on Murray’s final decision between Major League Baseball and the National Football League.

It would be impossible to play quarterback in today’s NFL while also playing professional baseball from March until (potentially) October. Even though the Oklahoma Sooners outfielder posted a slash line of .296/.398/.556 while flashing world-class speed on the baseball diamond, the itch after winning the Heisman couldn’t keep Murray from dipping his toes into the NFL pool.

While he might not look like the “ideal” NFL quarterback, how can any team ignore 4,361 passing yards, 1,001 rushing yards, 54 total touchdowns and a College Football Playoff berth?

We know the first stretch of the NFL Draft. The first three picks ? the Arizona Cardinals, San Francisco 49ers and New York Jets ? are set at quarterback, so they’d likely pass at the position. In the meantime, while the rest of the NFL teams alive in the playoffs sort the back end out, here are six franchises who should go all-in and take a chance on Kyler Murray.

Throwing this out there to chew on folks…..Cardinals trade Rosen to the Patriots…Pats get a 1st rd QB on the cheap… Cards draft Kyler Murray #1 & get a decent draft pick in return…#Pats get their future “Tom Brady”….#VeryPatriotish

I know. The “New England Needs To Find Tom Brady‘s Successor” argument is back again, but this time they should listen.

Bill Belichick’s offensive teams are creative and malleable, using players like gadgets on a finely crafted Swiss army knife. If the franchise felt confident in Murray’s commitment to studying the game and learning it “The Patriot Way,” then drafting Murray at the back end, or even moving up, would be a no-brainer. He’s the embodiment of New England’s ever-changing offensive attack and would learn the position from the greatest champion of NFL history.

The Steelers are an absolute mess. After starting 7-2-1, they let the AFC North slip away and crash landed at 9-6-1 and out of the playoffs. Le’Veon Bell is gone. Antonio Brown wants nothing to do with Pittsburgh right now. Ben Roethlisberger’s clock is ticking.

It’s time to blow this thing up and start fresh with the most electric player in college football. Reminiscent of former Pittsburgh quarterback Kordell Stewart, the 2001 AFC Offensive Player of the Year nicknamed “Slash,” Murray could be the spark that could ultimately save Mike Tomlin’s job.

kyler murray would look 🔥🔥🔥 in a dolphins uniform pic.twitter.com/sA9xySTJDp

It’s unclear if the Dolphins will retain Ryan Tannehill for next season, but they’re bringing in a new coach with another system, so it might be time to hit the reset button in Miami.

Pairing Murray’s speed with running back Kenyan Drake would be a scary combo in the Sunshine State, but there are so many holes to fill that General Manager Chris Grier may look elsewhere and stick with Tannehill’s dreadful contract a little longer.

1. Kyler Murray declared for the NFL draft
2. Denver Broncos select Murray in the the draft
3. Patrick Mahomes vs. Kyler Murray for the next 15 years twice a year

Vic Fangio, a 60-year-old defensive coordinator, gets his first head coaching job this season after a four-year stint with the Chicago Bears, and his offense needs some new toys to play with.

The emergence of undrafted running back Phillip Lindsay, along with young wide receivers Emmanuel Sanders and Cameron Sutton, leaves GM John Elway in a pickle: ride out Case Keenum’s final season or reach for another quarterback and get Kyler Murray?

Do you really need another explanation that that?

Ah, wouldn’t it be poetry in Jon Gruden‘s fantasy world to add the Heisman Trophy winner? Oakland already has love for Kyler Murray just for being affiliated with the Athletics, so why not just send him over to the lowly Raiders?

Even though it’s highly unlikely the Raiders remain in Oakland much longer, it’d be a warm reception into one of the most dysfunctional NFL franchises for Murray.

Murray’s agent Scott Boras told The Chronicle last February that he expects his client to report to A’s spring training, but winning the Heisman Trophy appears to have changed all that.

Most of this is still hanging in the balance until Murray officially declares that he’ll enter the NFL Draft. Being a high-profile athlete isn’t a bad thing by any stretch of the imagination. That is, until you have to choose one career path over another. Murray could easily cycle through the MLB farm system and never establish a professional baseball career. On the other hand, his NFL longevity could be an issue if he struggles to learn the game and adapt from his college days.

Regardless, a decision has to be made, and the clock is ticking.