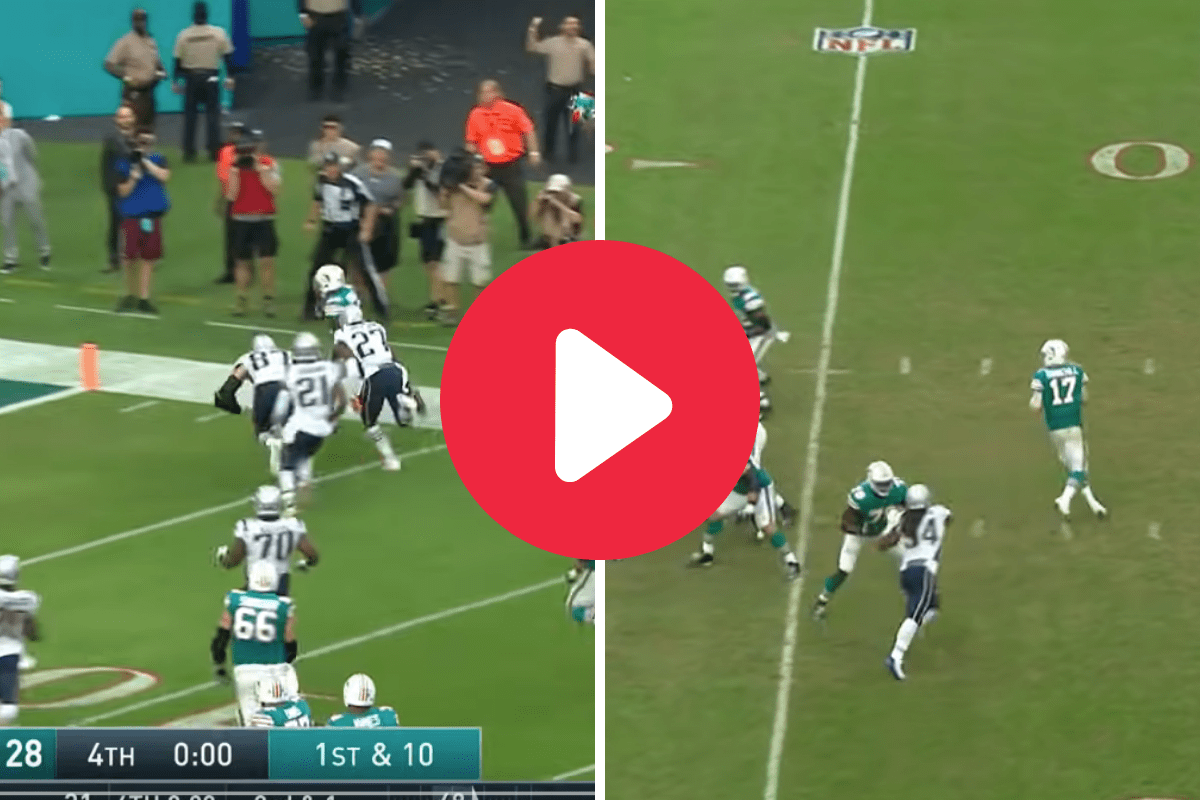 In 2017, it was a game-winning touchdown as time expired by Minnesota Vikings wide receiver Stefon Diggs. In 2012, the “Fail Mary” gave us one of the strangest endings to a football game we’ve ever seen. In 2018, the Miami Dolphins gave football fans not only one of the greatest plays of all time, but maybe the greatest finish to a game in NFL history.

New England Patriots quarterback Tom Brady, as he’d done so many times in his career, led his team on a four-minute drive to set up a potential game-winning field goal by Stephen Gostkowski with 16 seconds left. As many fans headed for the exits, the Dolphins would pull off one of the wildest plays in NFL history, send their AFC East rivals home with a loss, and leave our mouths wide open in awe of what just happened.

Covering 69 yards is no easy feat in any level of football. In the fourth quarter of NFL games in 2018, there were only 11 plays that covered that much ground prior to what happened in Miami.

From his own 31-yard line, Dolphins quarterback Ryan Tannehill wound up and hit wide receiver Kenny Stills with a pass, who then pitched it to DeVante Parker, who would lateral the football to running back Kenyan Drake. The field suddenly opened up, and the running back out of Alabama turned in one of the wildest final plays you will ever see.

According to Elias Sports, the Miami Miracle is the longest game-winning score with no time left on the clock in the Super Bowl era.

While it might not surpass the level of the Immaculate Reception, The Sea of Hands, or “The Catch,” the Miracle in Miami was the greatest finish to an NFL game I’ve ever seen in my lifetime, and I don’t know if another play will top the improbable nature of a nine-point underdog beating the NFL’s greatest dynasty once again.

With a win, New England could have clinched their 10th-straight AFC East title and their 16th-consecutive season with at least 10 wins. That wouldn’t happen on December 9 on the Dolphins’ watch, who have now beaten New England in five of the last six home games at Hard Rock Stadium in Miami Gardens.

Not only did Drake’s 69-yard touchdown feature Patriots tight end Rob Gronkowski hitting the ground like a 300-year-old oak tree as he tried tackling the speedy running back, it ended in complete pandemonium and a hero’s welcome in the locker room from coach Adam Gase and the rest of his Miami teammates.

Every NFL season is full of ups and downs, whether you’re the Houston Texans, Jacksonville Jaguars, Pittsburgh Steelers, Los Angeles Rams or Arizona Cardinals, but it’s going to be hard to top this play for a long time. We’ll be seeing Kenyan Drake outrun Rob Gronkowski to the end zone to cap the Miracle in Miami for a long time.