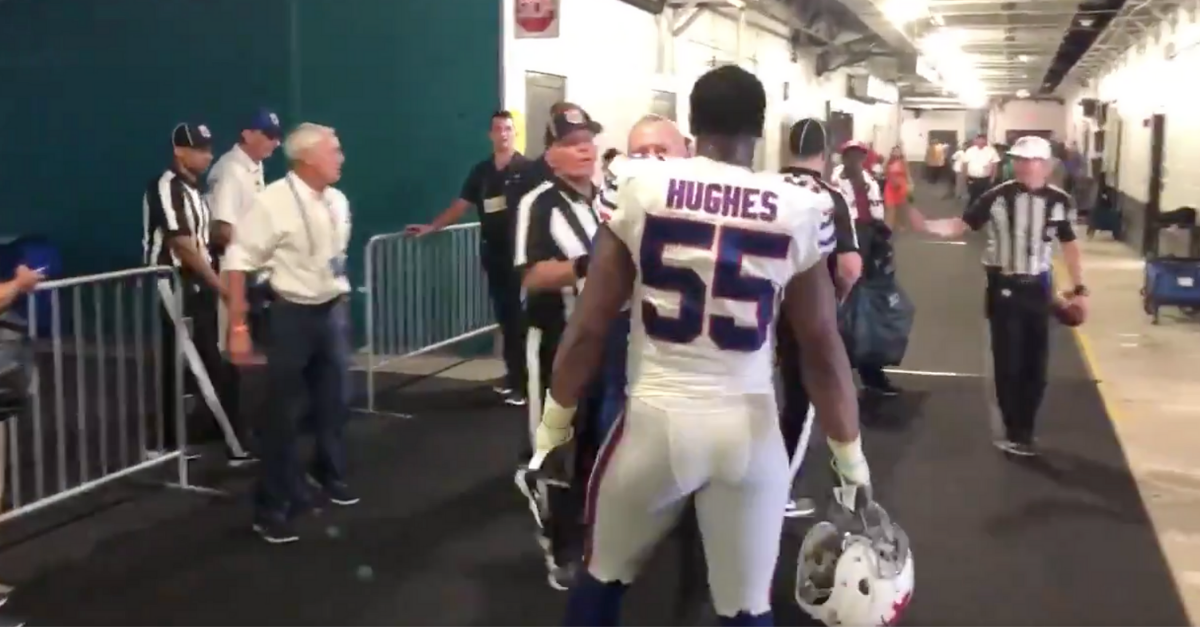 People always say two wrongs don’t make a right, and that couldn’t have been more true Sunday afternoon in the tunnel of Hard Rock Stadium. It’s hard to tell what truly caused such postgame turmoil, but it’s not a good look for a player and an official to be seen arguing and needing to be separated following a heated and heartbreaking game for the Buffalo Bills.

When quarterback Josh Allen’s throw went through the hands of Charles Clay on fourth down — a sure touchdown to steal a nice road win — no Bills coach, player, or fan was happy. Losing a 21-17 heartbreaker to the Miami Dolphins stung. However, people are likely even more curious now about a postgame confrontation the NFL is reviewing.

Soon after the game ended, Buffalo Bills defensive end Jerry Hughes ran off the field and went straight to the officials in the tunnel. What happened next, which was captured by Spectrum News sports anchor Jon Scott, certainly needs some clarity very soon.

Jerry Hughes runs off field and straight to officials, getting in the face of one in particular. Clearly something said that set Hughes off. #Bills pic.twitter.com/4uuqHL9mLM

So, what caused this?

Apparently one of the officials, the one that 6-foot-2, 250-pound Hughes approached following the game, called him a “b—“ at some point and that set Hughes off.

When asked directly about the confrontation, Hughes denied it, stating he would “love to see the video.”

“I mean, I lost the game so I’m supposed to be angry,” Hughes explained. “We just played our butts off for four quarters and we came six inches short of winning the football game. So I think myself, with a lot of Buffalo Bills fans, are probably upset right now. That’s just the nature of playing sports. Someone is going to win. Someone is going to lose.”

Bills DE Jerry Hughes, the No. 31 overall pick by the Indianapolis Colts after a consensus First-Team All-American career at TCU, most likely denied the confrontation to not stir the pot more or have to pay a bigger fine.

Something clearly happened for this to take place, and it’s probably safe to assume that both the NFL official and Hughes were wrong to let it get to that point.