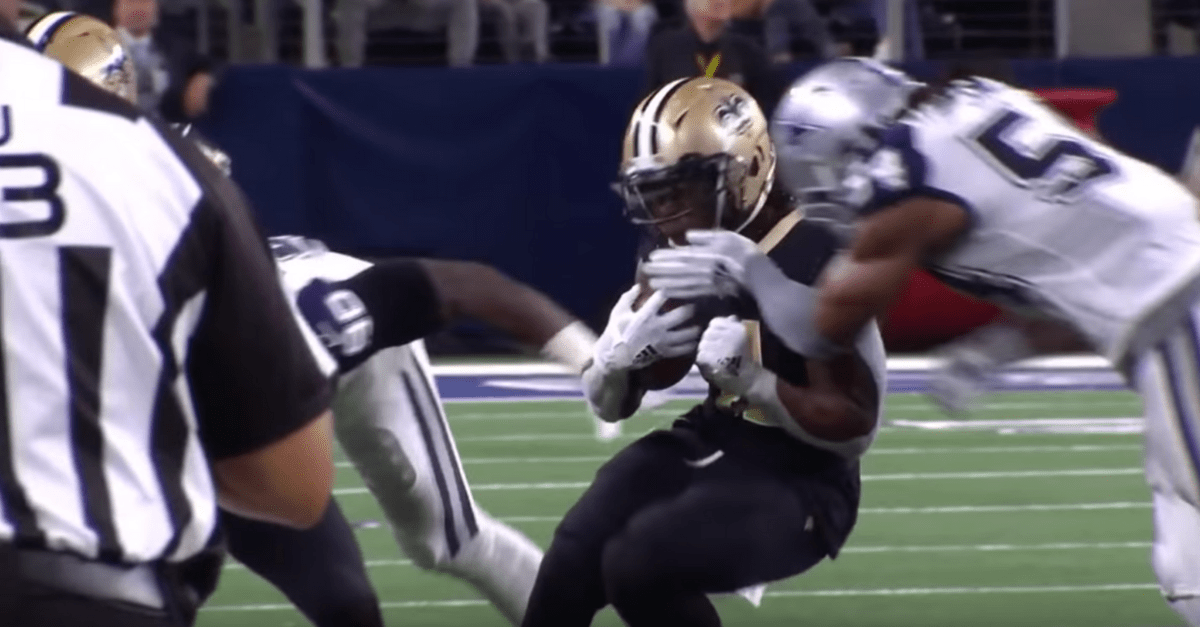 Heading into Week 13’s Thursday Night Football game, the New Orleans Saints were expected to roll into AT&T Stadium and annihilate the Dallas Cowboys. However, head coach Jason Garrett’s team stuck to the plan, and they managed to knock off the best team in the NFL.

Despite a dominant defensive performance — holding the Saints to just 176 total yards of offense in their 13-10 win — Dallas was the beneficiary of several blown no-calls. The Cowboys also missed out on a few missed penalties themselves, balancing out to create one of the worst officiating performances we’ve ever seen.

I hate to judge a crew on a primetime game that just has more scrutiny than 1 of 9 games on Sunday. But, unfortunately, it was obviously a substandard game from the crew, which has had some high profile misses already this season

To make matters worse, the game was called by the most-experienced officiating crew in the NFL. Led by head referee Walt Anderson, who has 23 years of experience himself, this crew has 138 years of NFL games between them. The most inexperienced of the bunch, field judge Terry Brown, still has worked games for 13 years.

This crew must have left their contacts at home because they were awful on Thursday night.

The worst missed call came on an obvious helmet-to-helmet hit on Saints running back Alvin Kamara. Considering this was one of the league’s biggest areas of emphasis this offseason, missing Cowboys linebacker Jaylon Smith launch into Kamara, which left the second-year pro dazed on the ground afterwards, is inexcusable.

UPDATE: On December 7, ESPN’s Todd Archer reported that Smith would be fined $26,739 for this hit on Kamara despite not being flagged on the play. The linebacker has said he will appeal the fine. The second-year linebacker said of the hit:

“It’s the last gladiator sport. As I was going to tackle him, he turned his body at the last second and I hit him. I hit him. I put my arms out to hit him and there was some contact. But, like I said, it’s the game that we love and definitely no intentions to play the game the wrong way. I’ve been taught well.” — Jaylon Smith, per CBS Sports

Later in the game, as Cowboys quarterback Dak Prescott scrambled forward, his facemask was grabbed and turned directly in the field of play. Still, that wasn’t called, and the Dallas faithful watching the replay on Jerry Jones‘ 218-foot jumbotron erupted in boos when the replay was showed.

On a play where defensive end Demarcus Lawrence forced a fumble of Drew Brees, and Dallas recovered, Randy Gregory was called for lining up in the neutral zone on the play. This one, which former referee Mike Pereira called something that does and doesn’t get called, isn’t the most egregious, but we’ve seen WAY worse not called in the past.

Maybe the most important no-call, which came late in the game on a pivotal third down, Cowboys wide receiver Cole Beasley lunged forward for a first down and came up a full yard short.

Once again, the crew managed to miss this one, and with New Orleans out of challenges, it helplessly watched as Dallas’ drive continued, forcing the Saints to burn the rest of their timeouts.

This was a horrible night for this crew and the NFL product. Seeing Dallas win is great for their brand, and the conversation about the NFC’s best teams, but putting a flawed product on the field only casts doubt as to the legitimacy of this win.

Walt Anderson and his crew will have better nights, but this is one they’re going to want to forget.

READ MORE: Would T.O. Kneel During the National Anthem? Of Course He Would