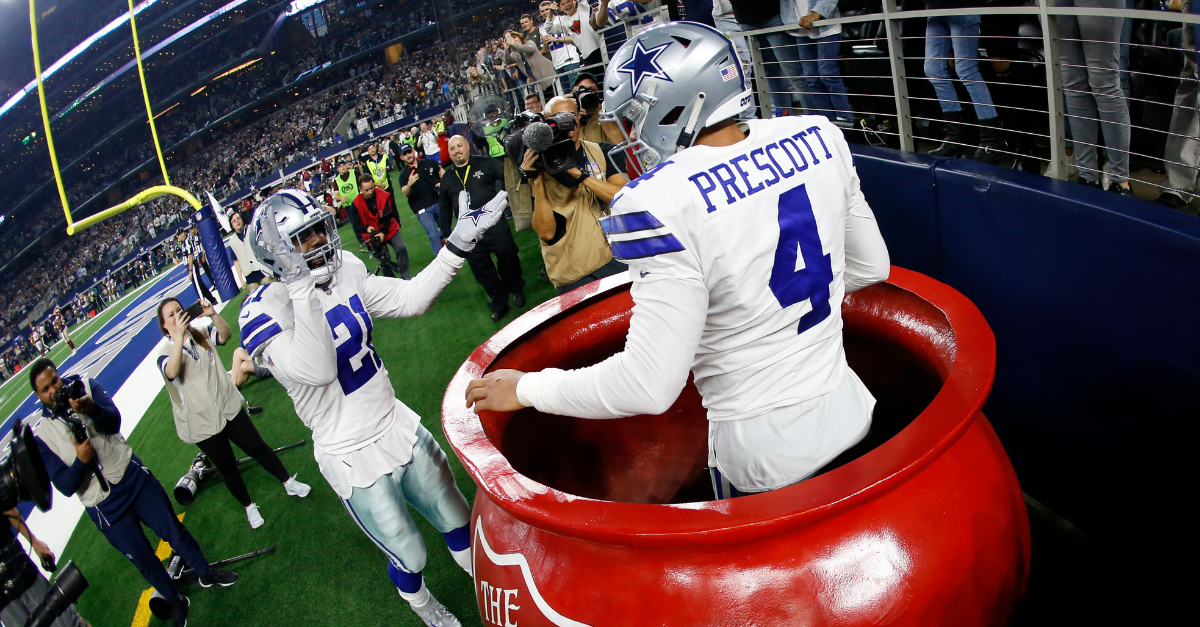 The biggest game of season for the Dallas Cowboys is coming up on Thursday Night Football when they host the top team in the NFC, the New Orleans Saints. Most NFL experts give the Cowboys zero percent chance of pulling off this upset, which would be a huge knock on the Cowboys’ playoff chances with the Redskins and Eagles on their tail.

Beating the Saints would wouldn?t be an easy task. After losing their first game of the season, the Saints have won nine in a row as their offense has steamed rolled everyone they’ve faced.

With that being said, the Cowboys who found themselves on the outside looking in on the playoffs three weeks ago, are now on top of the NFC East with a 6-5 record after winning three-straight.

Although, it might be hard for some to believe, the Cowboys do have a chance to beat the Saints, and here is how:

#CowboysNation: Join me in the #FightForGood. I’ll match every $21 donation made to @SalvationArmyUS this week, up to $21k. Visit https://t.co/oBiB3Y0BrZ to give. @dallascowboys wanna match too? pic.twitter.com/C0gghJG9QZ

The formula that has helped the Cowboys the past few weeks has been to run Ezekiel Elliott. Elliot is the best running back in league, leading the NFL with 1,074 rushing yards heading into Week 13. Good things tend to happen when he is given the football. It also means if he is running the football effectively, Drew Brees and the Saints offense is sitting on the bench, and the last thing the Cowboys want to do is get into a shoot out with the Saints.

2. Protect the Football At All Costs

The #DallasCowboys defense is clicking – they’ve had 5 interceptions in their last 3 games.
Hear how Rod Marinelli and the players would describe their recent play and what they need to focus on to take their game to the next level.

The quickest way to get behind the Saints is turning the ball over. A lot of teams find themselves behind early because they make mental mistakes which give the Saints the early momentum, which always turns into an early lead. The Cowboys cannot afford to make any mistakes in this game as they lean so heavily on the running game, and Dak Prescott might not have the tools to pull Dallas out of a whole.

One of the reasons the Cowboys are where they are right now is because of their defense lead by DeMarcus Lawrence. These group of Cowboys hold opponents to 19 points a game and have 31 sacks so far in 2018. This group is going to be critical if the Cowboys are going to stay in this game. Making Drew Brees feel uncomfortable in the pocket will be easier said than done, but if they can at least manage to keep them under their historic pace, they’ll have a chance.

4. Get Amari Cooper the Ball Early

This route from Amari Cooper is filthy. pic.twitter.com/wJ45995MxP

The Cowboys finally found their go-to threat in Amari Cooper,  who has made a huge difference in the Cowboys offense. Even when he is not catching the football, just his presence is a threat, which opens it up for other wide receivers on the team, and of course the running game. But, as we saw last week versus the Washington Redskins, Cooper hasn?t lost a step since he left the Oakland Raiders.

5. Take the Air Out of the Football