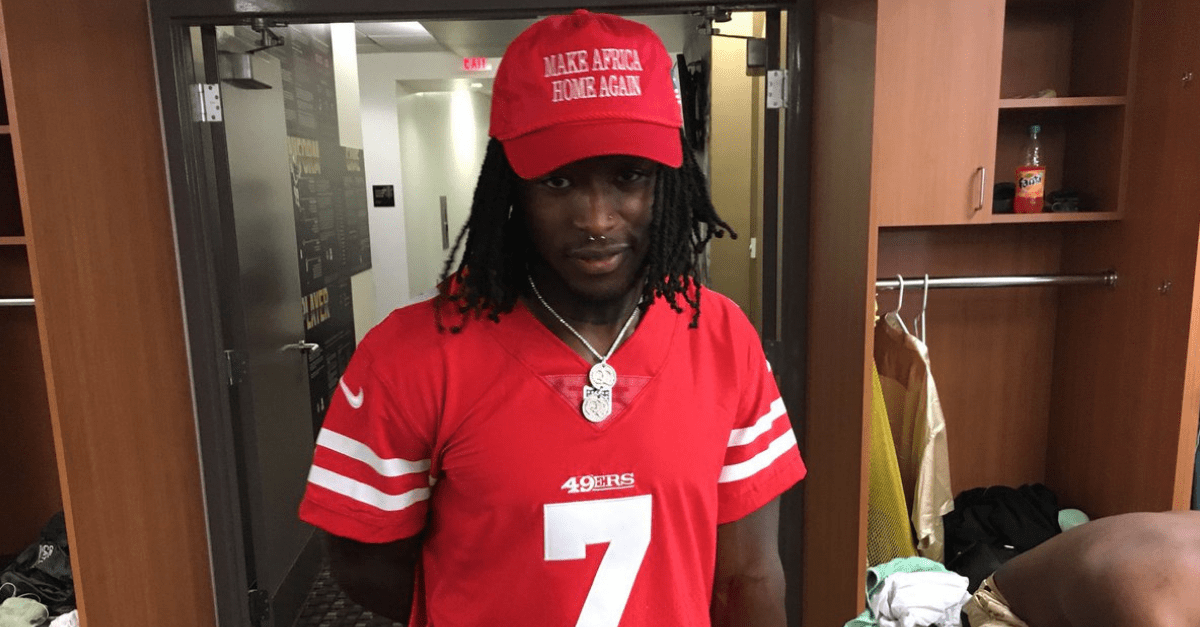 Just when you thought the buzz surrounding national anthem protests was starting to quiet down, it picked up in a big-time way in the latest round of NFL games. Not only did Carolina Panthers safety Eric Reid kneel during the anthem on Sunday, but New Orleans Saints running back Alvin Kamara also made his stance known after Monday Night Football.

If actions truly speak louder than words, Kamara certainly made his point known. Following the Saints? 43-19 victory over the Washington Redskins at the Superdome, the 2017 Pro Bowl selection wore a red San Francisco 49ers jersey of Colin Kaepernick and a red ?Make Africa Home Again? hat in the Saints locker room that garnered plenty of attention.

Seeing a Colin Kaepernick jersey is nothing new, but the red hat, the one that rivals the ?Make America Great Again? hats worn in support of President Donald Trump, is on a completely different level.

President Trump has been vocal on social media regarding anthem protests, but perhaps nobody has challenged it with postgame attire like this, and it might be bolder than any sideline protests against social injustice, racial inequality and police brutality

A third-round pick in the 2017 NFL Draft, the 5-foot-10, 215-pound Kamara definitely saw his role diminish with running back Mark Ingram returning from suspension against the Redskins. He finished with six carries for 24 yards and three catches for 15 yards and failed to score a touchdown.

Yet, for some reason, the postgame outfit worn by Kamara, and originally shown by Josh Katzenstein of The Times-Picayuna, was one of those powerful statements hardly anyone could ignore.

Mark Ingram and Alvin Kamara back to doing joint interviews again now that Ingram is back from suspension — and Kamara sporting the Kaepernick jersey. pic.twitter.com/pe2mjTJ40g