It's truly remarkable the caliber of players who toted the rock while wearing the star on their helmet, but one of my favorite ever is easily Marion Barber III. He only played six seasons in Dallas and never eclipsed 1,000 rushing yards in a year, but "Marion the Barbarian" earned a reputation as one of the toughest runners the modern game's ever seen.

Sadly, Barber passed away at the age of 38, according to a Dallas Cowboys statement on Wednesday. The cause of death isn't known.

"We are heartbroken by the tragic death of Marion Barber III. Marion was an old-school, hard-nosed football player who ran with the will to win every down. He had a passion for the game and love for his coaches and teammates. Our hearts go out to Marion's family and friends during this difficult time," the Cowboys said.

The fourth-round pick of the 2005 NFL Draft punished defenders during his time at the University of Minnesota. Paired with teammate and future NFL running back Laurence Maroney, they formed one of college football's greatest duos. Both players eclipsed 1,000 yards in consecutive seasons (2003 and 2004), and both earned All-Big Ten honors during their career.

Barber still ranks second in school history with 35 career rushing touchdowns, two more than his father, Marion Barber Jr., who was pretty damn good in his own right.

That hard-hitting reputation followed Barber to the NFL. Despite not being Dallas' starter -- a role filled by Julius Jones -- Barber led the NFC with 14 rushing touchdowns in his second season, then made the Pro Bowl the following season after ripping off a 1,257 yards from scrimmage and scoring 12 total touchdowns.

Despite helping former Dallas Cowboys coach Wade Phillips and quarterback Tony Romo to a 13-3 record and NFC East division title in 2007, it's a two-yard run against the New England Patriots that stands out most in Barber's only Pro Bowl season.

Trailing by four points in the third quarter, the Cowboys faced 1st-and-20 from their own 10-yard line. Barber took a handoff left, but was swarmed by a host of Patriots.

Retreating, "Marion the Barbarian" lived up to his incredible nickname, breaking tackles attempts by Vince Wilfork, Rodney Harrison, Ty Warren, Junior Seau, James Sanders, Asante Samuel and Jarvis Green (twice) as he ran completely across the end zone and avoided being brought down for a two-point safety.

It was only a two-yard gain, but man, is there a better way to sum up this man's career?

It was a matchup of 5-0 teams, and boy, was this game iconic. Tom Brady threw five touchdowns as part of his NFL record 50 scores that season. Hall-of-Fame wide receivers Randy Moss and Terrell Owens both caught six passes and a touchdown. NFL icons were everywhere, and the Patriots ultimately prevailed, 48-27, on their way to an undefeated 16-0 regular season. 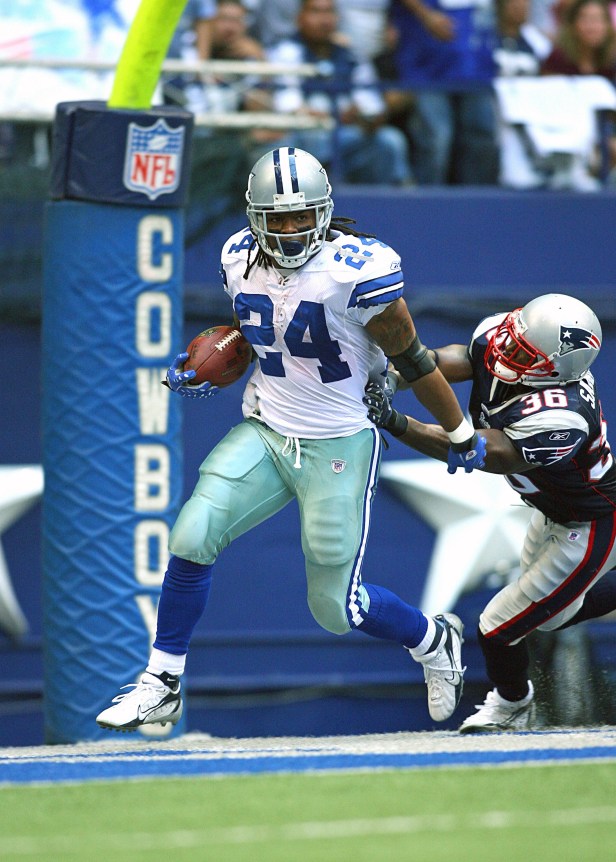 As for Barber, his punishing running style earned him a seven-year, $45 million contract in 2008, but the hits took their toll. Recurring thigh, knee and toe issues eventually forced him out of football after playing his seventh and final season with the Chicago Bears.

He didn't earn any MVP awards and won't make the Pro Football Hall of Fame, but remembering the greatness of a player like Barber is what makes football great. He wasn't there long, but man, few players impacted the game like he did in such a short time. May he rest in peace.

This article was originally published November 22, 2019.