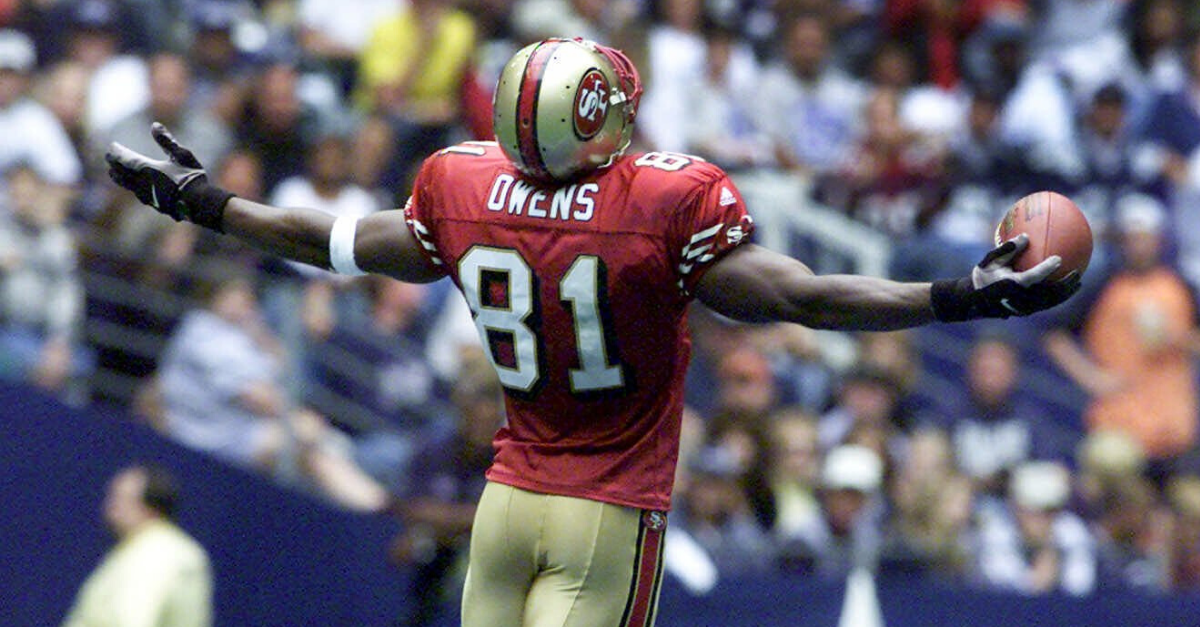 Touchdown celebrations are everywhere you look these days. From the Seattle Seahawks classic “New Edition” dance to the Ole Miss peeing dog imitation or the Indianapolis Colts keg stand celebration, NFL and college football teams are getting more and more creative in the end zone after scoring.

One of the founding fathers and pioneers behind these silly celebratory events is Terrell Owens. Known for his cocky attitude and the skills to back it up, Owens was must-see TV when he took the field.

Across the wide receiver’s 15 years in the league with the San Francisco 49ers, Philadelphia Eagles, Dallas Cowboys, Buffalo Bills and Cincinnati Bengals, Owens created some of football’s most memorable touchdown celebrations.

T.O. once hid a pen in his sock and signed a ball after hauling it in for a touchdown with the 49ers, making one lucky fan quite happy. He dumped a full tub of popcorn on his face and was fond of dance celebrations, once mocking Ray Lewis’ signature dance and performing his own routine with a cheerleader’s pom poms.

But the most savage touchdown celebration of Owens’ career and in NFL history took place in Dallas, when he disrespected the Dallas Cowboys in the greatest way possible.

19 years ago today, @terrellowens stood on the Dallas star after BOTH of his TDs ⭐️

It was September 24, 2000, and the San Francisco 49ers were playing at the Dallas Cowboys in Texas Stadium. The stadium was known for its giant, gaping hole in the roof that allowed players to look directly into the sky.

Prior to the game, T.O. had already made up his mind. If and when he scored a touchdown, he was going to run from the end zone to the Dallas Star in the middle of the field and look straight into the sky to give thanks to God.

So upon reeling in a three-yard touchdown pass from Jeff Garcia in the second quarter, T.O. did exactly that. He sprinted straight to the star on the 50-yard line stretched his arms out by his side and gazed directly into the sky. Cowboys fans booed him into oblivion.

Owens, however, told A Football Life the gesture wasn’t meant to be disrespectful.

Emmitt Smith Responds With His Own Celebration

(2000) Terrell Owens with his 2nd celebration on the Dallas star in the same game! Savage.

Cowboys running back Emmitt Smith clearly took offense to it. After scoring a touchdown himself on the next possession, NFL’s all-time leading rusher sprinted to the middle of the field and slammed the football down on the Dallas Star. It was his way of saying “this is my house” to T.O.

According to Owens, the battle was on.

Everyone in the building knew it was coming. All Owens had to do was catch another touchdown.

Sure enough, when Owens caught a one-yard touchdown in the fourth quarter, he beelined it for the logo at midfield. Cowboys safety George Teague was having absolutely none of it. Teague lowered his shoulder at full speed and leveled Ownes to the ground.

Teague, according to Owens, was fuming from a play before the touchdown where T.O. drove the Cowboys player to the ground on a block.

The 49ers wound up winning the game, 41-24, and Terrell Owens instantly became the most-hated man in Dallas. He went on to play for the Cowboys from 2006-08.

San Francisco 49ers head coach Steve Mariucci hated every second of Owens’ antics. So he suspended his star wide receiver for one week.

Apparently, Owens didn’t care for his coach’s opinion. He became well-known for his touchdown celebrations and didn’t care who he offended.

I guess you can do whatever you want when you have more than 150 touchdowns and 15,000 receiving yards to your name. The third-round pick in the 1996 NFL Draft ultimately landed in the Pro Football Hall of Fame after playing in a Super Bowl and six Pro Bowls.

Owens constructed plenty of spectacular games over his career, including his nine-catch, 122-yard playoff outing against the New England Patriots in Super Bowl XXXIX. Even though he only finished with 51 yards on five catches that September day in 2000 against the Cowboys, he made damn sure everyone in Texas Stadium know about the two touchdowns.

Owens set a trend for disrespecting the Dallas Star. Tennessee Titans cornerback Kevin Byard paid homage to the legendary celebration in 2018, when he recorded an interception and danced on the logo in a Monday Night Football game. Other players have followed suit as well.

Side-by-side of Kevin Byard and @terrellowens, 18 years apart, celebrating on the star at midfield in Dallas. 👀 @KB31_Era pic.twitter.com/d5FgFjVDUG

Still, that might not be the weirdest thing to happen to the middle of an NFL field. Just ask the Minnesota Vikings.