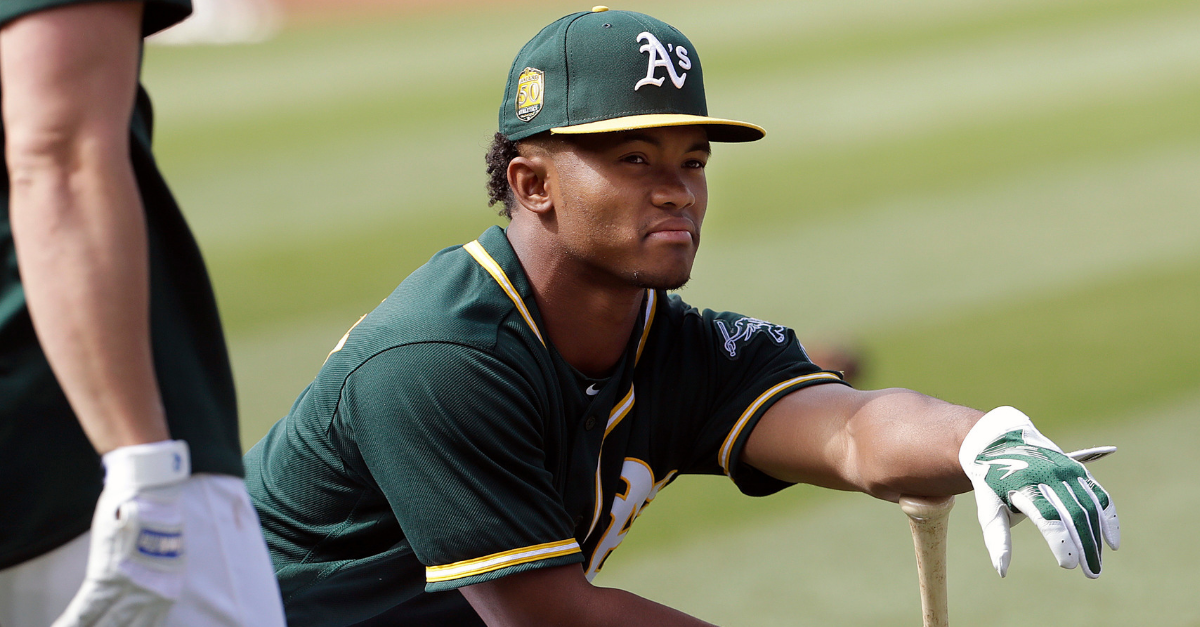 They definitely don’t want their prized baseball prospect hurt on the football field.

The Heisman Trophy-winning quarterback from Oklahoma has made himself many new fans in the A’s organization ? except when he dashes from the pocket.

Murray is a shifty runner, often breaking loose for big gains. He’ll next play Dec. 29 when he leads the fourth-ranked Sooners against bruising No. 1 Alabama in a college football semifinal.

RELATED: Kyler Murray Made More Money Than These Pro Athletes in 2018

“We are big Oklahoma fans right now, for sure. It’s kind of tough to watch him scramble around a little bit sometimes. But still, it’s exciting,” Athletics manager Bob Melvin said Tuesday at the winter meetings.

The Athletics are counting on Murray wearing an Oakland jersey in a few months at spring training, sharpening his skills as an outfielder.

Drafted last June in the first round as the ninth overall pick, Murray signed with Oakland for $4.66 million. There was an agreement between the team and Murray that he would play football this year, then skip his senior season to begin his pro baseball career.

Murray showed off his skills at the Coliseum in an A’s uniform back in June. Melvin, executive Billy Beane and general manager David Forst are just a few of the A’s brass who have been watching him closely ever since as he guides Oklahoma.

Not to mention some potential division opponents.

“I’m watching Oklahoma football,” Angels general manager Billy Eppler said, smiling and chuckling from his suite high above the Las Vegas Strip. “He seems like a very remarkable athlete. We’ve known that a little bit about him, even from his high school days. He was a two-sport All-American in high school, Mr. Everything. I know somebody that has come in contact with him even back when he was just coming out of high school. His quarterback development and all those types of things, I have some common friends from some NFL commonalities, and he’s really fun to watch. It will be interesting to see how all that unfolds.”

Melvin is watching more Oklahoma games than he expected, noting: “We are pulling hard for them.”

“You’re reading before the season started is he going to be the starter there and the next thing you know he’s the Heisman Trophy winner and has a chance to win national championship,” Melvin said.

Murray is represented by agent Scott Boras, and the A’s fully expect Murray to pursue baseball.

“He’s one of the great athletes you’re going to see,” Melvin said. “How many guys are able to … drafted in the first round … Heisman Trophy winner? There aren’t many of those guys. You know athletically he can handle just about anything.”

Melvin certainly has envisioned Murray as an A’s major leaguer one day.

READ MORE: Kyler Murray?s Homophobic Tweets Prove Any Moment Can (And Will) Be Spoiled