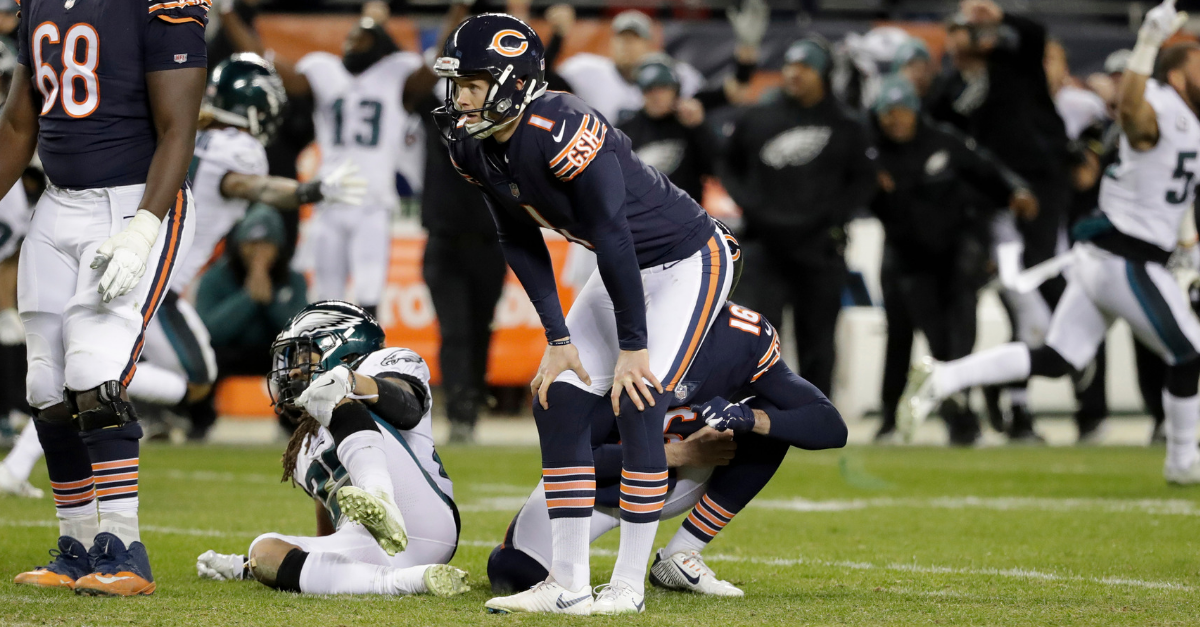 The Chicago Bears were trailing quarterback Nick Foles and the Philadelphia Eagles by one point with 10 seconds left in their NFC Wild Card game. Bears kicker Cody Parkey, a BCS national champion during his time playing for the Auburn Tigers, lined up for a potential game-winning 43-yard field goal attempt to send the Bears onto the divisional round of the NFL Playoffs.

The snap went down, the kick went up, and the hearts of Chicago fans sank around the country. Parkey’s kick hit the left upright, perilously hit the crossbar on its way down, and fell harmlessly into the end zone at Soldier Field. Mistakes at work happen, but if you miss a field goal that ends your team’s season, that apparently entitles sports fans around the country to suggest death threats on your home, family, and your life.

The unfortunate miss was Parkey’s seventh missed field goal that season, and it was the fifth kick that had hit an upright after he miraculously managed to do that four times in a single game earlier this year against the Detroit Lions.

Mistakes are bound to happen in a professional work setting, and if you claim to have never made a mistake in your life, then you either haven’t been called out for making one, or you’re a liar.

After the 26-year-old’s massive miss, which followed his three successful kicks from 36, 29, and 34 yards to keep Chicago in the game, Parkey took full responsibility for the loss in the locker room by simply saying, “I feel terrible.”

RELATED: Daniel Carlson’s Short Vikings Career Reminds Us How Cruel the NFL Can Be

After the game ended, and Chicago’s 12-4 year and NFC North division title season was over, the onslaught on Parkey’s life and family began. People around the country took to social media to criticize, threaten, demean, humiliate, and attack the 2014 Pro Bowl kicker following his first season wearing a Bears uniform.

WARNING: Some of the following tweets include NSFW language.

i hope cody parkey is in debt the rest of his life, his wife cheats on him tremendously, his kids turn out not to be his, and he develops Lou Gehrig’s disease over his throbbing leg arthritis

Cody Parkey can burn in hell forever. He is dead to me. I hate him.

I will beat the shit out of Cody Parkey myself someone please slide his address!

These comments, whether you consider them empty threats or not, are a downright disgrace. If you feel the need to threaten someone doing a job that you can’t even imagine trying to take up, then you have no right to call yourself a sports fan.

For the record, the kick in question was tipped at the line of scrimmage. Eagles defensive tackle Treyvon Hester appeared to have gotten a piece of the football with his right hand as it entered flight, which is likely the reason the kick tailed to the left and caused the infamous playoff game “double doink” to happen.

That fact didn’t stop salty Bears fans though, as many started various GoFundMe campaigns to buy out the remaining $9 million guaranteed of Parkey’s four-year, $15 million contract.

For Bears head coach Matt Nagy, quarterback Mitch Trubisky, and the rest of this team, they entered the offseason with a lot of momentum after Chicago finished with the franchise’s most wins in a regular season (12-4) since winning 13 games and reaching the Super Bowl in 2006.

For Cody Parkey, it was a long offseason of regret and reflection, but expect this kid to come out on a mission next year to start the 2019 NFL season.

UPDATE: After Parkey was released by the Bears in the offseason, the free agent kicker remained unsigned. Despite his Pro Bowl rookie season with the Philadelphia Eagles, then two solid years kicking for the Cleveland Browns and Miami Dolphins, no NFL team wanted to take a chance on the much-maligned kicker.

Finally, the Tennessee Titans stepped up and signed Parkey on October 9, 2019 after Cairo Santos started the season 4-of-9 on field goal attempts, yet made all 12 of his extra points.

Last season’s failures should fuel Parkey even more in 2019. Hopefully, the 27-year-old former USA Today All-American in high school gets to showcase that he’s one of the league’s better kickers despite one season of humiliation.

This article was originally published January 7, 2019. Many of the original tweets were deleted, but the text was written exactly as seen above. The article was also updated after Parkey signed with the Titans.