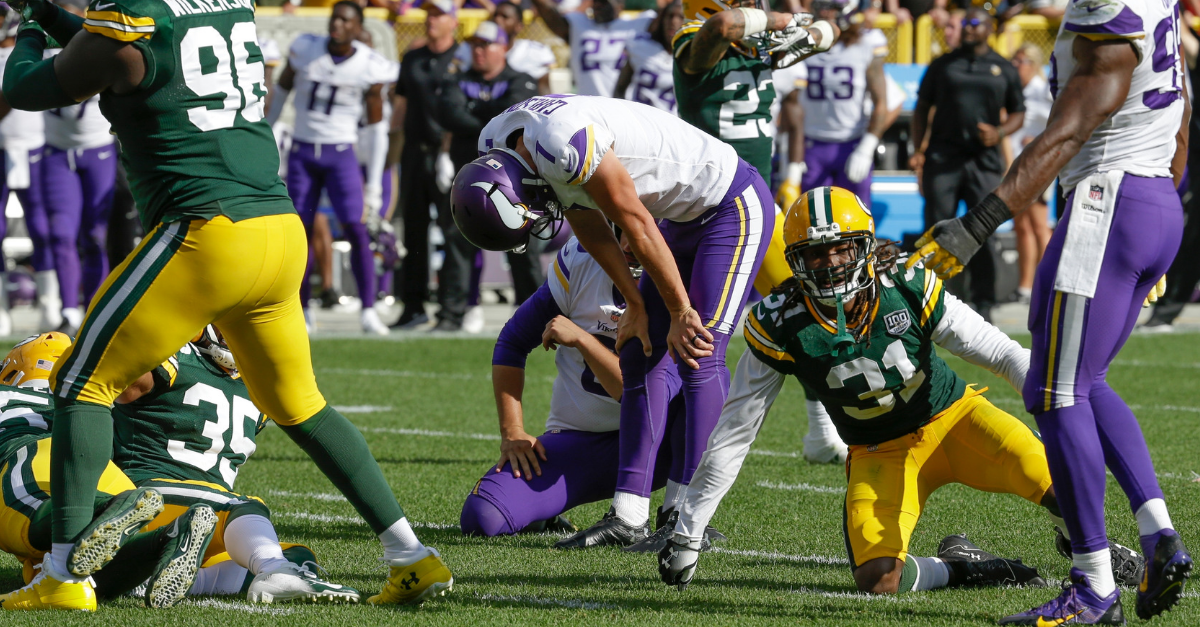 With the No. 167 overall pick in the 2018 NFL Draft, the Minnesota Vikings selected kicker Daniel Carlson, a three-time All-American with the Auburn Tigers, to be their next big leg. It all looked very promising until everything came crashing down late Sunday afternoon at Lambeau Field.

Not only did Carlson miss the game-winning field goal at the end of overtime ? a 35-yarder most would consider a chip shot in today?s NFL ? he also missed another during the overtime period and another in regulation. All of them missed to the right. All of them cost the Vikings a chance to steal a road win against the Green Bay Packers instead of having it end in a 29-29 tie. All of them cost Carlson his job.

Less than a day later, Minnesota waived the 23-year-old Carlson and is expected to sign veteran free agent kicker Dan Bailey to replace him.

Carlson, who beat out Kai Forbath in the preseason, isn?t the only kicker to be released on Monday, either. The Cleveland Browns cut Zane Gonzalez and signed Greg Joseph in very similar fashion. However, releasing a rookie kicker after just two games and a bad performance on the road is a reminder of how cruel the NFL can be.

Daniel Carlson and Zane Gonzalez were two of the most prolific kickers in college football history. They each have one bad NFL game and don’t get a second chance. It’s unreal.

The leading scorer in SEC football history with 474 points, Carlson made 92 of 114 field goals (80.7 percent) and never missed an extra point (198-for-198) during his stellar career at Auburn. The Colorado Springs, Colorado native was a three-time First-Team All-SEC selection and three-time Second-Team All-American.

Whether it was a bad day, the yips, something else in between, or all of the above, there is no tolerance for a playoff-contending team to have an inconsistent kicker. Not on the road against your division rival. Not when your star quarterback Kirk Cousins throws for over 400 yards. Not ever with head coach Mike Zimmer and general manager Rick Spielman, apparently.

The 30-year-old Bailey, the second-most accurate kicker in NFL history, is expected to start for the Vikings in Week 3 against the Buffalo Bills after an incredibly successful run with the Dallas Cowboys since being undrafted in 2011. He was released by the Cowboys in August.

Carlson, who went 1-for-4 on field goals with the Vikings with the three misses Sunday, will get another chance somewhere. He?s too talented not to. But in the NFL, one bad day at the office can lead to free agency and that’s as tough as it gets.