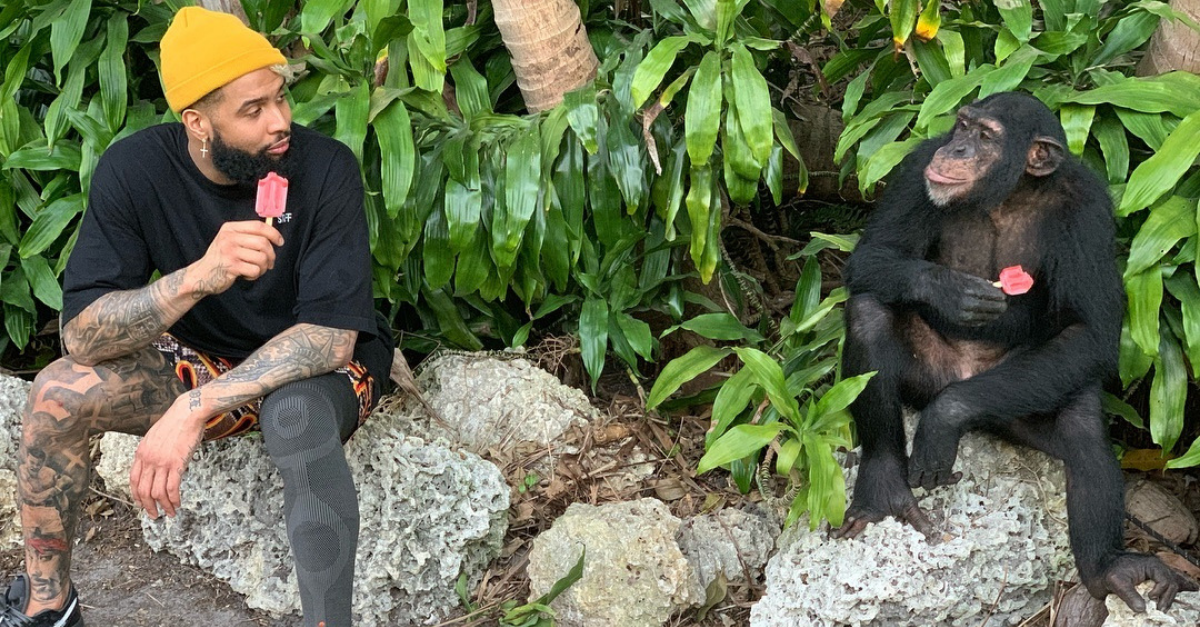 While some national organizations work for the interests of law enforcement officers who serve and protect citizens all over the U.S., there are other institutions who just take things too far. The People for the Ethical Treatment of Animals (PETA) love stirring up controversy in the oddest places, and they’re back again with another strange criticism.

During a recent trip to the Myrtle Beach Safari roadside zoo, star New York Giants wide receiver Odell Beckham Jr. brought his football acumen to the jungle, so to speak. In an Instagram post, Beckham was playing catch with a young chimpanzee and later running around with a few big-cat cubs. That, apparently, was a huge no-no in the eyes of PETA, and they condemned both the Giants receiver and the “sleazy safari park” for it.

The three-time Pro Bowl wide receiver and 2013 First-Team All-American of the LSU Tigers appeared to be having a ball of fun alongside Mike Holston, also known as “TheRealTarzann” by his Instagram account, who specializes in animal education, conservation, and works to raise awareness for animal rights to over four million followers on social media.

Well, PETA wasn’t having nearly as much fun after seeing this experience at the backyard zoo being so widely enjoyed. The animal rights organization released a strongly-worded condemnation of both Odell and the Myrtle Beach Safari.

You can tell they were serious as their press release was in all capital letters, too.

“THESE SENSITIVE AND MUCH-ABUSED ANIMALS BELONG WITH THEIR FAMILIES IN NATURE, NOT PIMPED OUT AS PROPS BY SHAMELESS ROADSIDE ZOOS. WE?RE SURE THAT ODELL BECKHAM JR. HAD NO IDEA THAT THE SLEAZY SAFARI PARK WHERE THIS YOUNG CHIMPANZEE IS KEPT HAS A LENGTHY RECORD OF VIOLATING FEDERAL LAW AND USES GREAT APES AND BIG-CAT CUBS IN CHEAP PUBLICITY STUNTS LIKE THIS. THESE ENCOUNTERS ARE INCREDIBLY DANGEROUS, AND PETA URGES EVERYONE?INCLUDING BECKHAM, WHO CERTAINLY DOESN?T WANT ANOTHER INJURY?TO STEER CLEAR OF CRUEL FACILITIES THAT EXPLOIT ANIMALS.”

The lengthy record that PETA refers to in their release is actually pretty shocking. The Myrtle Beach Safari, operated by Mahamayavi “Kevin” Antle, also known as “Doc Antle,” has a history of USDA citations ranging from improper construction of animal enclosures to failing to establish programs of adequate veterinary care. Their first documented citation, according to PETA, came on August 28, 1987.

Including that first violation, PETA documented 85 different federal violations against the compound over the last 32 years.

In response to these claims and accusations, Mahamayavi Antle released the following statement:

“As a society, we have lost our connection with wildlife. And, PETA does not want our world to regain that connection in any way, shape, or form. As part of PETA?s ongoing campaign to provide innuendo and misinformation, they take every opportunity to distort facts and fabricate stories in order to malign organizations such as Myrtle Beach Safari. We regret that some folks are being misled by PETA and others who don’t seem to care for accuracy, truth, and facts.

“But, here are the real facts: Myrtle Beach Safari is neither a roadside zoo, nor a shameless, sleazy, or cruel organization as suggested by PETA. Instead, at Myrtle Beach Safari our focus is on animal preservation, conservation, education, and research. In fact, Myrtle Beach Safari has been recognized by the state of South Carolina as one of the top and pre-eminent wildlife facilities in the United States. We?ve also received national accolades for the critical role we provide with our qualified, captive breeding programs which support global conservation efforts of threatened and endangered species.

“To further correct the record, the U.S.D.A. is our partner in wildlife. We work with them in a collaborative and interactive way to ensure our animals receive the very best life each and every day. Unfortunately, PETA and similar organizations abuse the U.S.D.A.?s oversight process to file untrue complaints against wildlife organizations such as Myrtle Beach Safari.

“The U.S.D.A.?s policy is to review any facility noted in a complaint with an unannounced inspection. Keep in mind that this is not an ?investigation.? Instead, it?s simply part of the U.S.D.A.?s complaint review process. In each and every instance, Myrtle Beach Safari has always immediately implemented corrective action on the spot, if requested. And, Myrtle Beach Safari has ALWAYS been in 100% compliance and never in violation of the animal welfare act. Just to reiterate, each and every complaint filed against Myrtle Beach Safari by PETA and other similar organizations have been completely closed, with the facility deemed to be in compliance with all U.S.D.A. standards.

“Myrtle Beach Safari remains devoted and committed to educating the community and protecting endangered species such big cats, non-native bears, great apes, and many others, despite PETA?s shameful and unfounded allegations.”

While I’m sure Odell Beckham Jr., fresh off an NFL season where he caught 77 passes for 1,052 yards and six touchdowns over 12 games, had any idea about the compound’s rough past, there didn’t seem to be any “incredibly dangerous” encounters taking place.

And yes, an animal rights group saying “Including Beckham, who certainly doesn’t want another injury,” is 100 percent a cheap shot below the belt.

There hasn’t been, and doubtfully will be, an apology on Beckham’s behalf to PETA. This is just another case of the animal rights organization working to make sure that humans and exotic animals only coexist as long as the dominant race isn’t controlling them, much like we have for thousands of years.