PETA Calls for the Demise of College Football’s Greatest Tradition 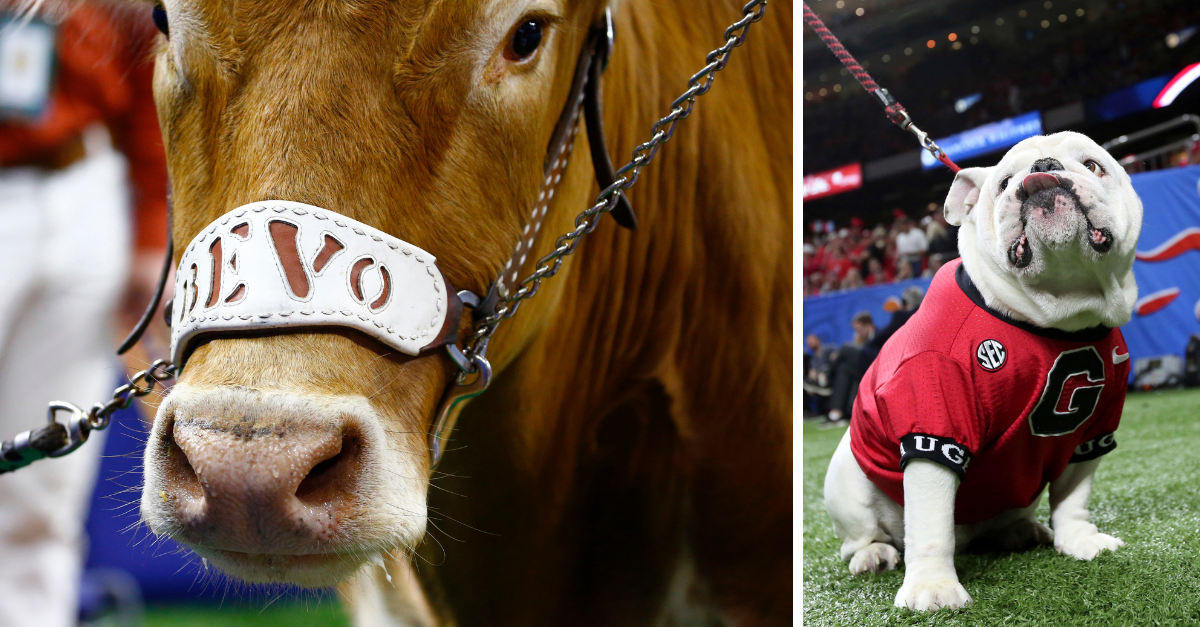 When the Texas Longhorns defeated the Georgia Bulldogs, 28-21, in the 2019 Allstate Sugar Bowl, many people weren’t focused on the performances in the actual game. Despite Texas quarterback Sam Ehlinger‘s three rushing touchdowns, and Georgia managing only 72 rushing yards after averaging more than 200 per game this season, the game itself turned out to be the secondary story.

Prior to Tuesday’s Sugar Bowl, Bevo XV, Texas’ longhorn steer mascot, attacked Uga X, the English bulldog that roams the sidelines of every game. The incident caused no serious injuries to either animals or the people in the immediate area, but now the People for the Ethical Treatment of Animals, more commonly known as PETA, have called for both universities to permanently end their use of live mascots at sporting events.

In a press release from the animal rights organization, PETA calls for the end of the live animal mascots, both of which have been around for years, saying that they should no longer be a part of the schools’ game day celebration.

“‘It’s indefensible to subject animals to the stress of being packed up, carted from state to state, and paraded in front of a stadium full of screaming fans,’ says PETA Senior Vice President Lisa Lange. ‘It’s no surprised that a skittish steer would react to a perceived threat by charging, and PETA is calling on the University of Texas and the University of Georgia to learn from this dangerous incident, retire their live-animal mascots, and stick to the talented costumed mascots who can lead cheers, react to the crowd, and pump up the team.'”

PETA is calling for the end of two mascot traditions that have defined these institutions for years. From Georgia’s perspective, this of course makes no sense. The lineage of Uga bulldogs dates back to 1956, when Frank W. Seiler first brought his bulldog to a Georgia football game. Since then, the biggest dust up involving Georgia’s bulldog mascot was when Uga V tried to bite Auburn Tigers wide receiver Robert Baker during a game in 1996.

On the flip side, Bevo, who has manned Texas football’s sidelines since Thanksgiving Day in 1916 and has had 15 descendants to its name, doesn’t have such a clean record of public appearances in the past.

While most claims are unsubstantiated with physical proof, there are many stories about Bevo lashing out in a “controlled” environment. For example, Bevo II is said to have once rushed an SMU cheerleader. Another time, Bevo III apparently escaped its enclosure and was loose on UT’s campus for two days. Even Bevo XIV is remembered for trying to rush the Baylor Bears coming out of the tunnel during a game in 2005.

Live mascots are a tradition passed down through generations. While many schools use costumed, human mascots in favor of the real thing, the nostalgia and tradition of seeing a school’s identity on the field is a hard bargain to try and end, even for a massive organization like PETA.

The calls to ban live mascots have yet to be more than rhetoric, but if you look at the evidence, maybe it’s time to reconsider hauling an 1,800-pound longhorn steer around for sports fans to take selfies with. Texas’ Bevo breaking through the confines of his makeshift pen is just another example of the reason why it might be time to move on.

Then again, maybe the handlers in New Orleans should have been smarter about bringing a little dog in a red sweater near a giant steer for the sake of a photo opportunity…

READ MORE: The 10 Most Bizarre Mascots in College Football