There are plenty of reasons to pick the right college, but choosing a school because of its mascot probably isn't one of them. Mascots are just part of the mixed bag you get when you pick the school of your dreams, especially if that school is the Rhode Island School of Design. While most universities use an intimidating animal or figurehead from their history, the real fun happens when some universities go off the rails with their weirdest college mascot suggestions.

Of course, there are reasons why these mascots were chosen, but we don't necessarily care about the reasoning. Everything from Fighting Artichokes to Fighting Pickles to Boll Weevils adorn sidelines around the country, but there's something special about our picks. And with March Madness coming up, we thought now would be a great time to introduce, or re-introduce you to some of our favorite felted fans ahead of the upcoming tournament. So we're here to break down the 11 most ridiculous school mascots in the United States. What do we mean when we say ridiculous? You'll see... 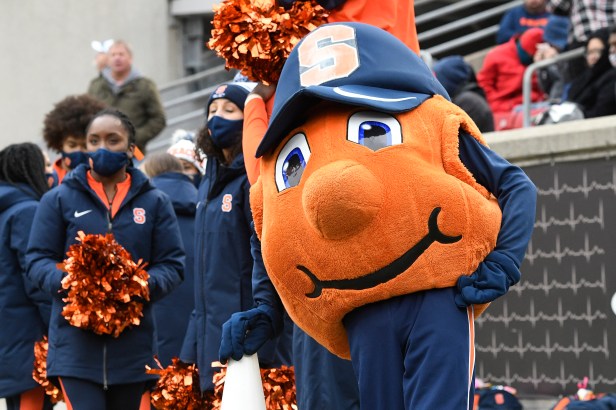 Hey Otto, no offense or anything, but what the heck is your deal? When you have to use the word "anthropomorphic" to describe your mascot, you should probably throw away the idea and get back to the drawing board. Syracuse University, though, decided to keep it after scrapping their former official mascot, a Native American character known as the Saltine Warrior, in 1978.

Syracuse did try a few options before landing on Otto, namely a Roman gladiator type dressed in orange, but apparently the students didn't bite. Get it?

It's so popular that there are myths about how it came to be, ranging from a stubborn okra plant on the baseball diamond to the fact that the school needed a mascot that was mean and green. Whatever the case, the Fighting Okra's permanent grimace makes the college football mascot costume even better. 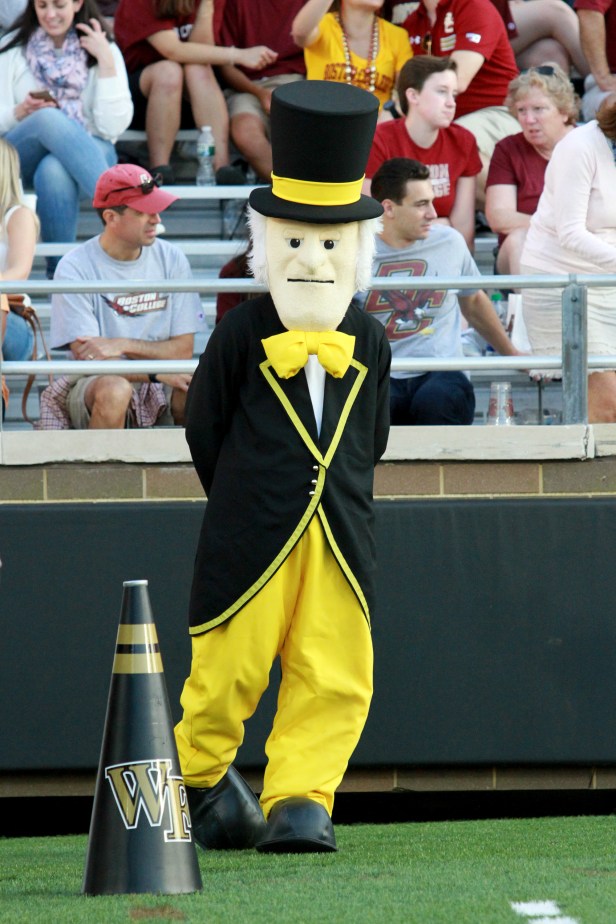 I have some serious qualms with Demon Deacon up there. First, the mascot came from a 1923 write-up after Wake Forest beat rival school Trinity (now Duke University), when the editor of the paper referred to the football team as the Demon Deacons for their devilish play. Let's remember that Wake Forest University is a private research university, but began as a biblical college.

Demon Deacon rides a motorcycle onto the field, but my biggest issue is with the design of the mascot's face. Why does he always look so focused and unhappy? What's with the formalwear? 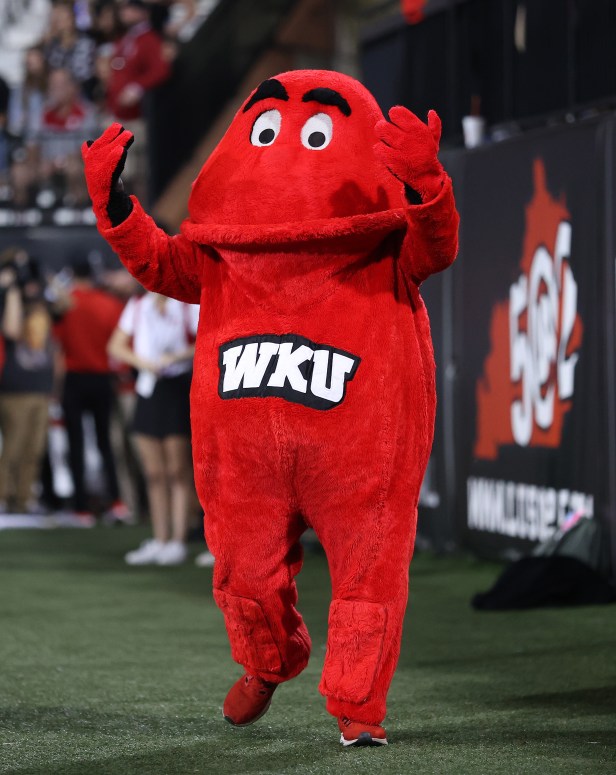 What the hell is a Hilltopper? Why is the mascot just a giant red blob with furry legs? Why does it always look confused? These are just a few of the many questions I had when I first saw this cartoon character on the field as a kid. Rumor has it that when the campus was moved up the hill to a new spot, the students could be seen carrying their things up the hill so. That's how we landed on the Hilltoppers. I don't know either, y'all.

However you slice it, WKU's Big Red is undeniably popular and many describe the creature as furry and lovable. Those are definitely intimidating words in college athletics. Not.

But also.... What is a Hilltopper? 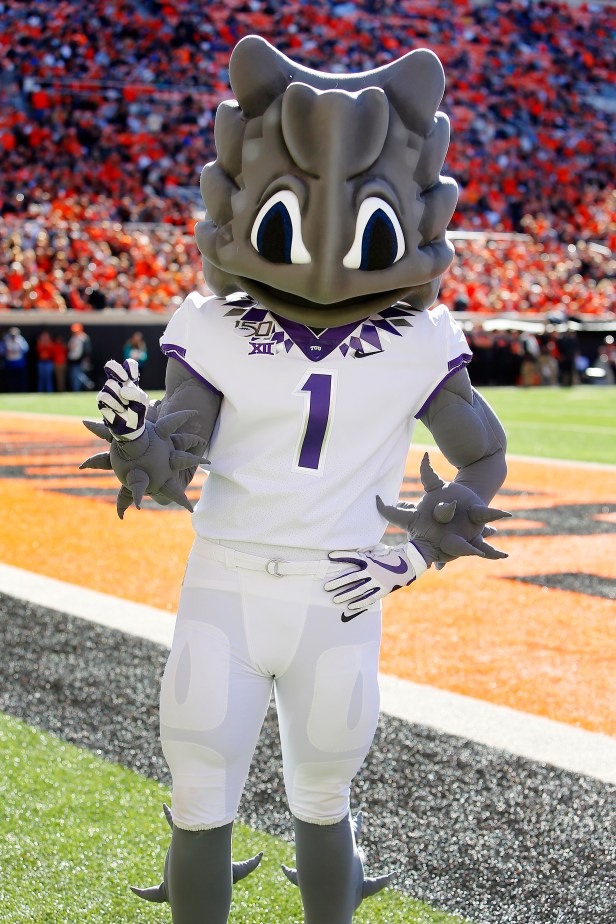 When I think of disgusting, gross things, horned frogs definitely spring to mind. Oh, and by the way, a horned frog is a type of lizard, not an actual frog. This confusion doesn't bode well for a college sports mascot. Apparently TCU students had the choice between The Horned Frogs in 1887 and The Cactus for the annual paper, and which one would you have picked from those options?

The Horned Frog stuck and now their mascot looks like a Pixar character had a baby with a Teenage Mutant Ninja Turtle.

6. Sebastian the Ibis, University of Miami 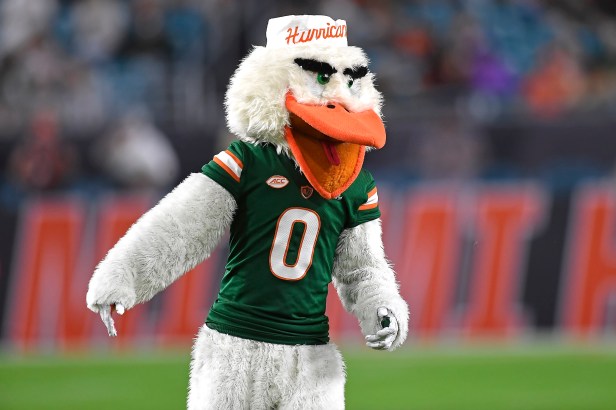 I love a good bird, but we need to talk about how much Sebastian the Ibis resembles the Oregon Duck. Are they cousins from the same mascot costume-maker? Why does Sebastian have such ferocious eyebrows? Do ibises have eyebrows?

The students chose the ibis as the unofficial mascot in 1926, even though the first mascot was named a white boxer dog named Hurricane. A student actually came to a home football game dressed as an ibis in a makeshift costume and the rest is history. Can we get Sebastian an eyebrow trim though? Maybe just run a brush through those things?

And also, how did we land on the name Sebastian? Last time we checked, that was a singing crab. 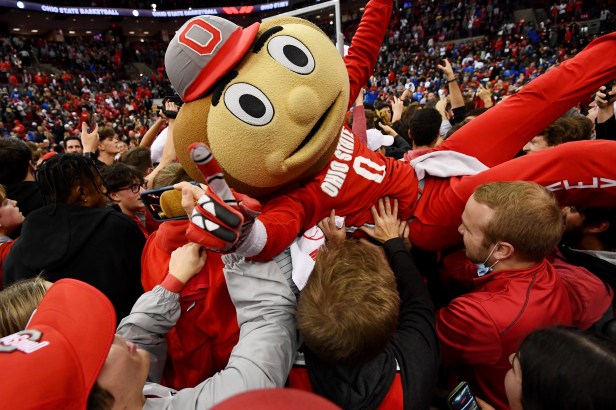 I might harbor some ill will toward Ohio State as a former Penn Stater, but every time I saw Brutus Buckeye at BIG 10 games, I really couldn't help but laugh. What could be better than a humanized buckeye? To that end, what makes a better mascot than a state tree?! A lot.

Oh Ohio State, I appreciate the fact that your Brutus only needs to wear a giant buckeye head instead of a full-body mascot costume. I do wish the team had kept the older version of Brutus, simply a papier-mâché nut with the student's hand and feet sticking out. At least he looks happier than the other mascots on this list. But don't look into those eyes for too long... 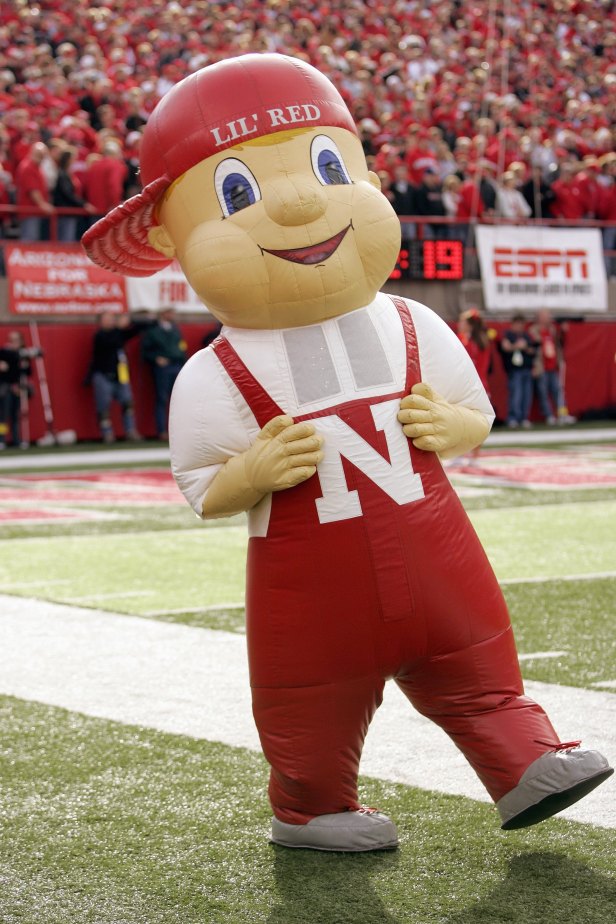 Well let's just skip the Cornhuskers bit and get right to the creepy Lil' Red part. I'm glad that Nebraska skipped over the name the Bugeaters, but I have a weird feeling that they probably should have stuck with the Mankilling Mastodons instead. At least it would be terrifying! Instead we have AN INFLATABLE TODDLER on the court at basketball games. Yes, it's an inflatable costume.

Herbie Husker skates on by in my book, I'm not out to get that grown man mascot. I am, though, out for Lil' Red. This weird child mascot makes me uncomfortable and the overalls? Chance the Rapper definitely took a page out of Lil' Red's playbook. This school's mascot isn't even old enough to party with the student body and that is skeevy.

PS. Apparently the student body only takes photos with Herbie because Lil' Red was nowhere to be found on Instagram. Does this mean even the students are creeped out? 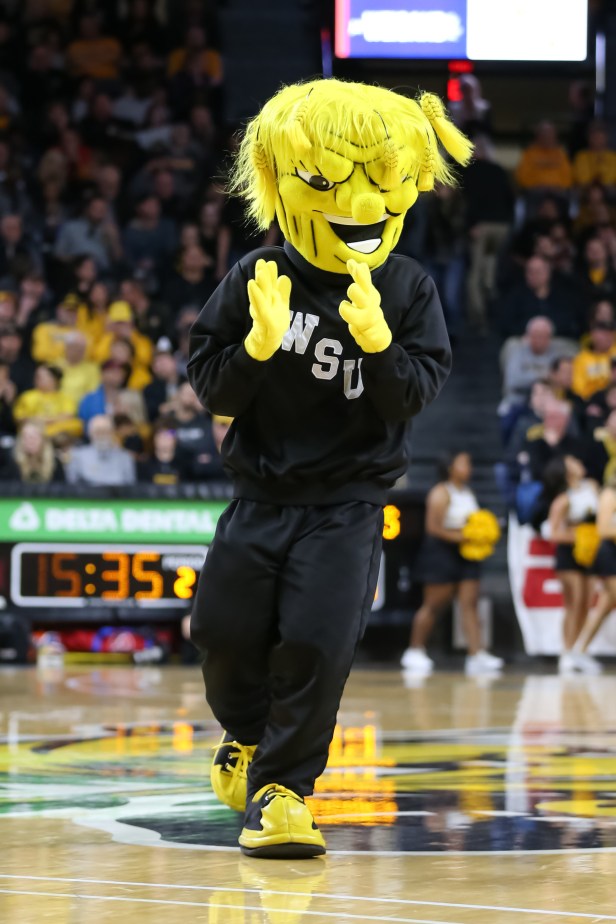 A bundle of wheat is no longer just a bundle of wheat when WuShock hits the scene in Kansas. I couldn't even believe this was a real thing until I actually saw it in the flesh, but the Shockers are real serious about this thing.

Ever since 1948, WuShock has represented Wichita State and in 1998, for his 50th anniversary, he got an even more bizarre costume redesign and starting going by Wu in casual conversation. The real kicker here is Wu's mouth, which is permanently opened in a smirking, yelling face? Is that how'd you describe it? Just looks a big ol' corn cob with legs to me. That's probably the point.

Alright. There are ridiculous mascots out there that play into the region's geography, but c'mon now. SAMMY THE BANANA SLUG!? These lowly critters scurry about the floor of California's massive redwood forests, and even the students there embraced Sammy the Slug as a "response to the fierce athletic competition fostered at most American universities."

In other words, the idea of a slug being scary was ridiculous, but University of California, Santa Cruz students loved the idea of bringing him to sporting events anyways. You can't make this stuff up, folks. 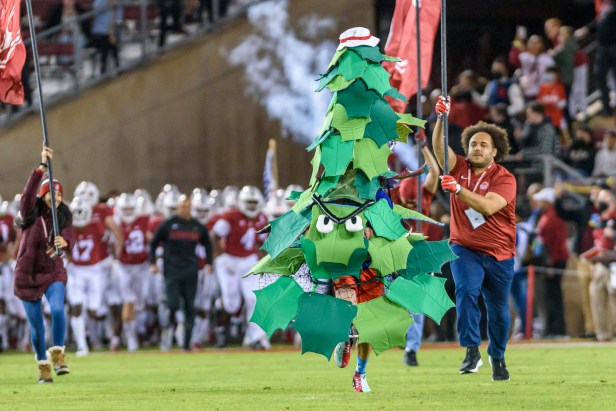 You had to know this would top the list. I mean, a tree as a mascot is just too bizarre. While it's the unofficial mascot because Stanford doesn't have an official one (what year is it??), this still takes the cake when you consider that the Stanford teams are known as the Cardinal for the red color, not the bird. That distinction is always made very clear.

I had to imagine the reasoning went like this:

Person 2: "Oh, so like the bird? I'll get started on designing costume."

Person 2: "Birds live in trees. A tree instead!"

How else could you explain the birth of the Stanford Tree? Oh, there's also the popularity among the students. The band was going to nix the Tree, but in 1975 the student body section went wild for the Tree running around instead of the boring ol' green mascot for the athletic teams.

Did your team make the list? You probably love your mascot for its uniqueness, and go you! For the rest of us, we'll just sit here and wonder why corn cobs have legs and deacons ride motorcycles on the field. Wisconsin, you just slid on by with Bucky Badger. That giant head gives me nightmares. Same for you, Sparty over at Michigan State. Your expressionless face creeps me out.

MORE: The 12 Most Intimidating Mascots in College Football, Ranked