College football is special for a lot of reasons. There are the tailgates, the fight songs and there's your whole week being ruined because your team lost on Saturday. These things, among many others, are what make game days in the fall so special.

College football is also one of the few sports that has live mascots. Yes, come to a home game for some programs and you can see a cute doggo, lion, tiger, bear, falcon and a freaking bison.

These live mascots are just as big of fans of their football teams as you and me. The only difference is they embody the spirit of the whole program. Plenty of schools across the country feature a live animal during their games in one way or another. Let's take a look at the best 17. 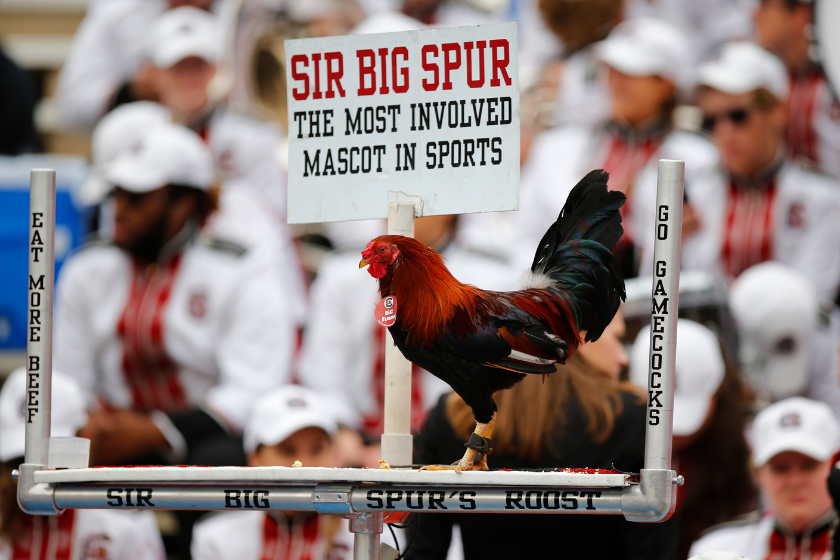 No mascot on this list had a busier offseason than Sir Big Spur. He had an identity crisis for crying out loud. He was almost Cock Commander. He was The General for about five seconds. However, once again, the University of South Carolina's live mascot is named Sir Big Spur. 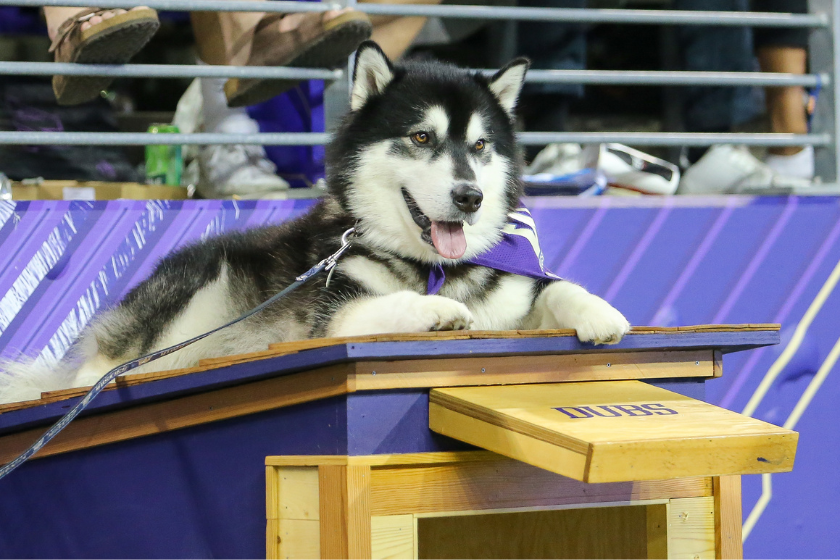 I have a soft spot for Huskies, and Alaskan Malamutes are no different. Dubs I unfortunately passed away earlier in the spring of 2021 after spending 10 years being a very good boy on the sidelines. Dubs II took over last season. 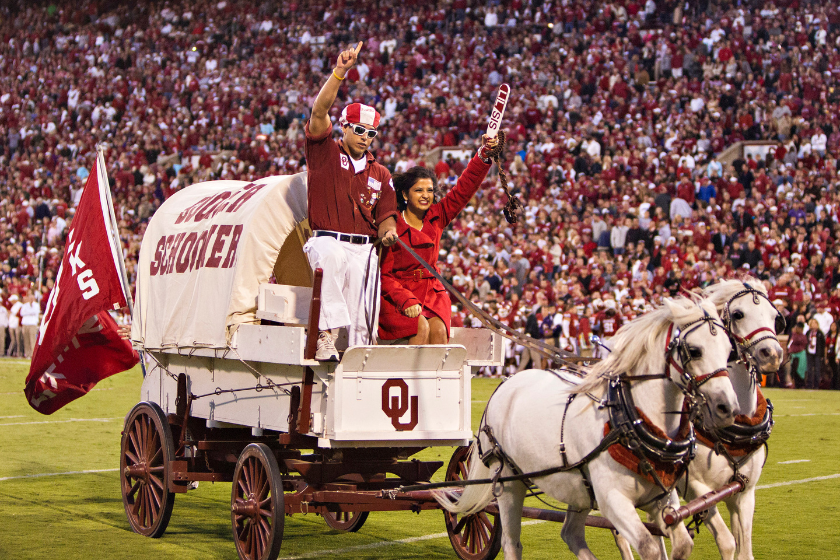 Boomer & Sooner star in one of the best entrances in all of college football. They also get to steamroll onto the field every time the Sooners are in the process of steamrolling an opponent. 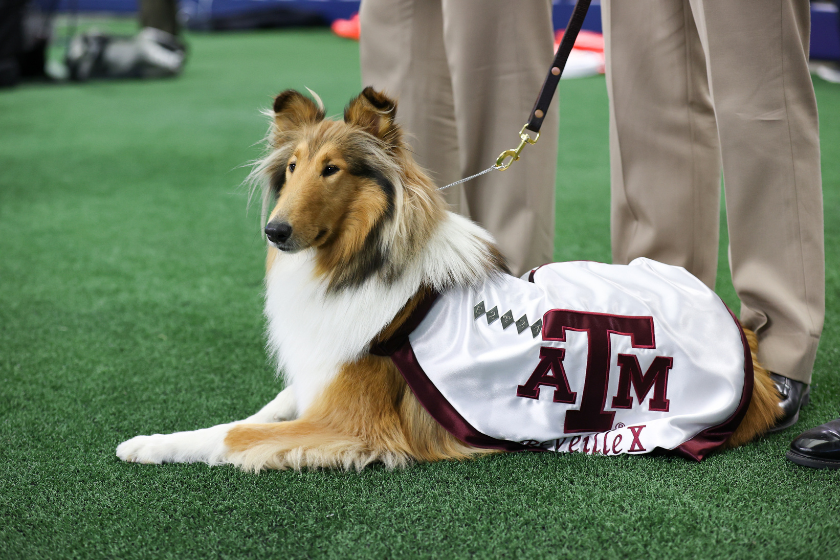 RELATED: How Reveille Became the "First Lady of Aggieland"

Reveille has a storied history at Texas A&M. She is the First Lady of Aggieland, she joins the team on the field every Saturday and she's the highest ranking member of the Corps of Cadets. The mantle has been passed on since 1932, and Reveille X is the current titleholder. 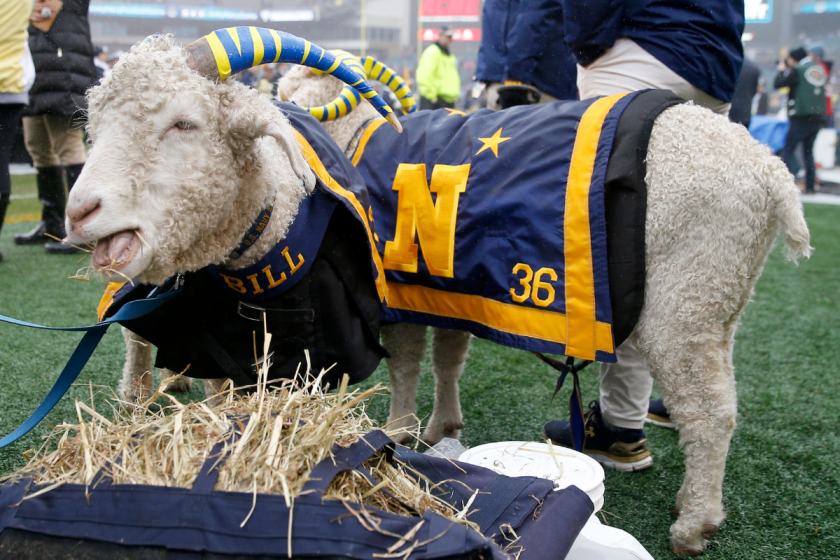 Photo by Elsa via Getty Images

Army and Navy have some of the richest traditions in the sport. For the midshipmen, this includes a live goat named Bill. Bill XXXVI, the current Bill, is the 36th iteration of the iconic college mascot. 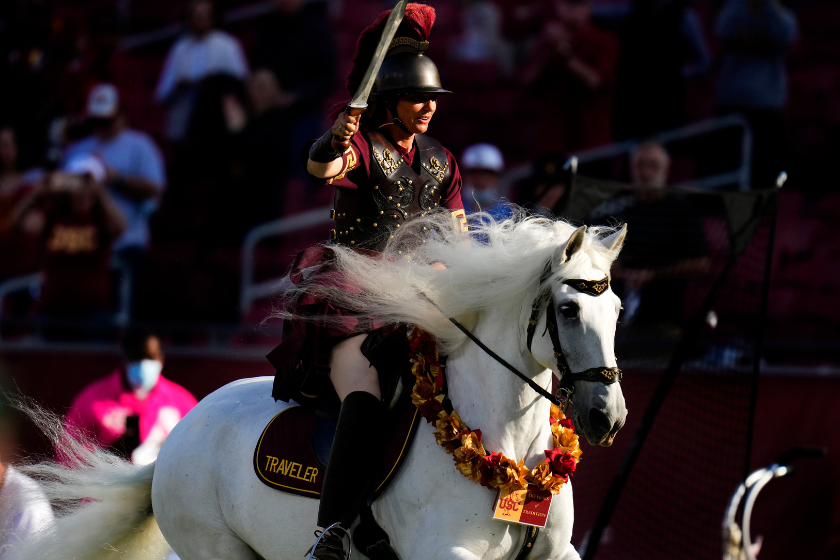 Traveler is as recognizable as any live animal mascot. He's the star of USC football in star-studded Los Angeles. The famous white horse has been a Trojan tradition since 1961. 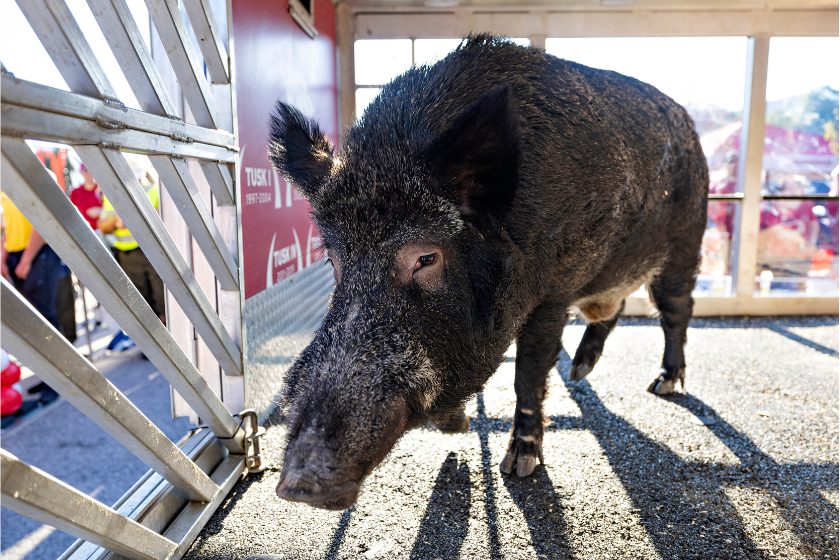 I'm in awe of the sheer size of this lad. Tusk is technically a Russian Boar but he's a Razorback at heart. 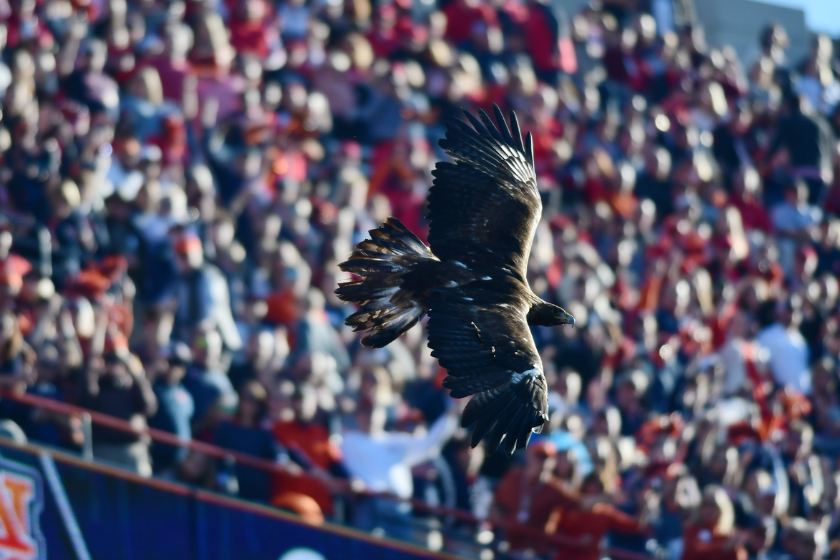 Eagles are badass. Let's face it, all birds of prey are. The "Eagle Flight" is something every NCAA football fan needs to see. 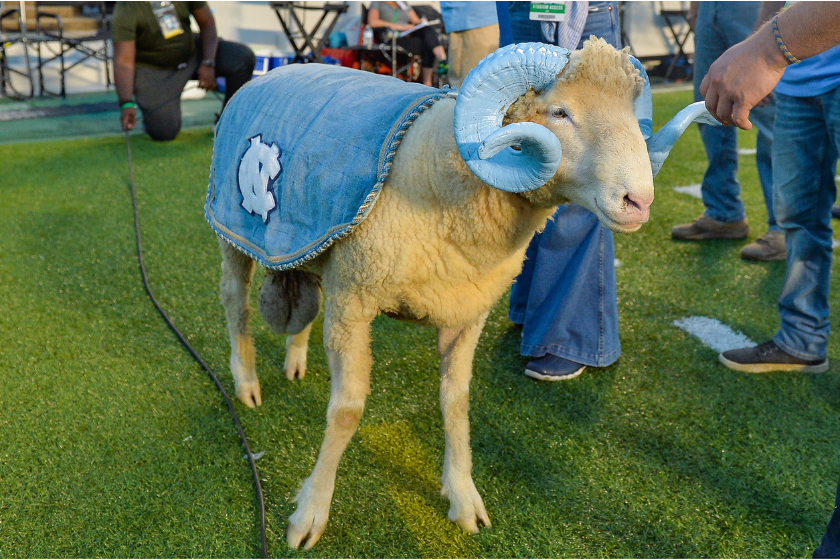 I'm not a UNC fan, but I can admit that powder blue is awesome. Paint it on ram horns and it's legendary. 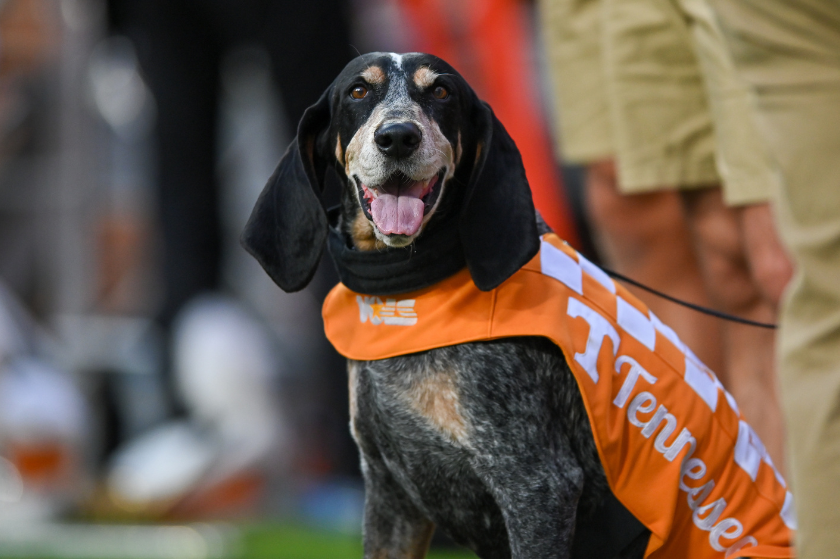 The most redeeming part of the Tennessee football program is Smokey, the Bluetick Coonhound. Smokey has a legit argument as the most adorable live mascot in the sport.

Like eagles, the Air Force Academy's live falcon Nova is badass. She's a pristine gyrfalcon and is learning the craft of representing the Academy. Nova is in her third season after replacing longtime live mascot Aurora, who died in October 2019 at age 23.

All of the care of Leo III and Una, including their food, day-to-day care and habitat upkeep, is donation- and volunteer-based. We are grateful for those who support our lions, and we hope you will, too, by clicking the donation button. #RoarLionshttps://t.co/7ELrsQfjfW pic.twitter.com/wCtOrjsH39

How about some college football-loving lions? Leo III is the official mascot of the University of North Alabama. Unfortunately, Una, his twin sister, passed away in 2020. You can count on a roar whenever North Alabama scores a touchdown. 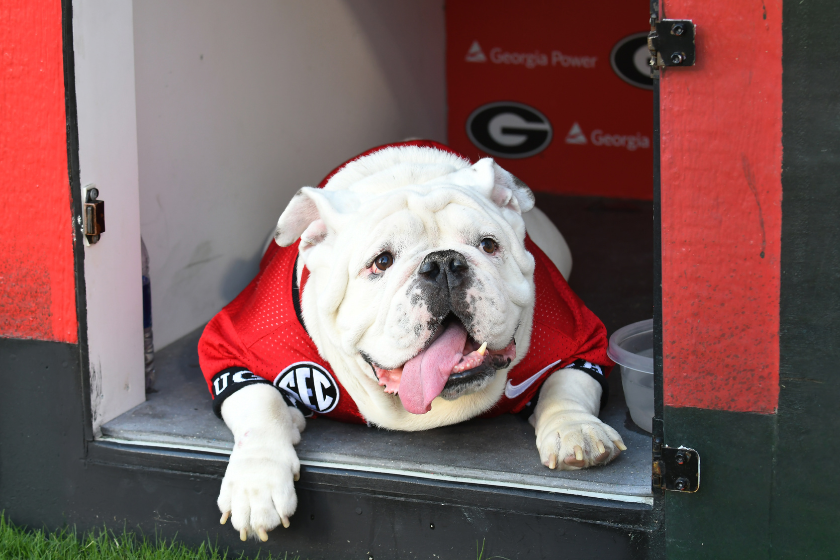 The famed English Bulldog is the heart and soul of Georgia football. An iteration of Uga has graced the Georgia sidelines since 1956 and even goes after opposing players to defend his team sometimes.

Mike is the unofficial king of Louisiana. He lives right on campus with the students and it was always a treat when former head coach Ed Orgeron channeled his inner Mike the Tiger. 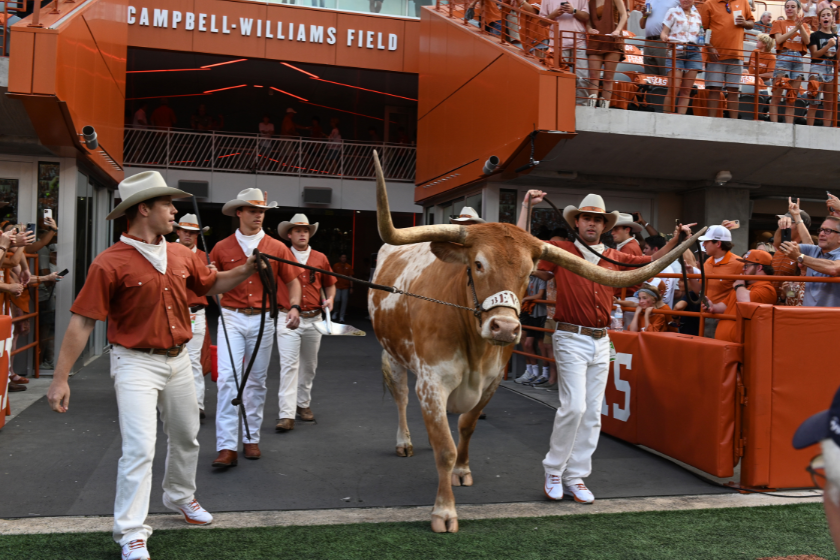 RELATED: How "Bevo" the Texas Longhorns Mascot Got His Nickname

Everything about the University of Texas is embodied in Bevo. Bevo can be found at every every Texas home football game, of course. He has a special place in the south end zone of Darrell K. Royal-Texas Memorial Stadium. 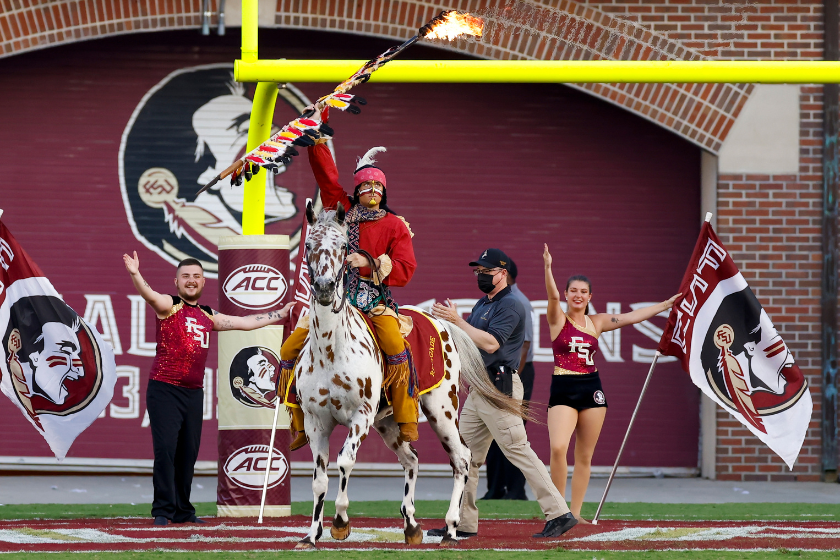 Renegade and Chief Osceola are so high on the list based on how epic their entrance is. Plus, Appaloosa horses have a spot-on look. 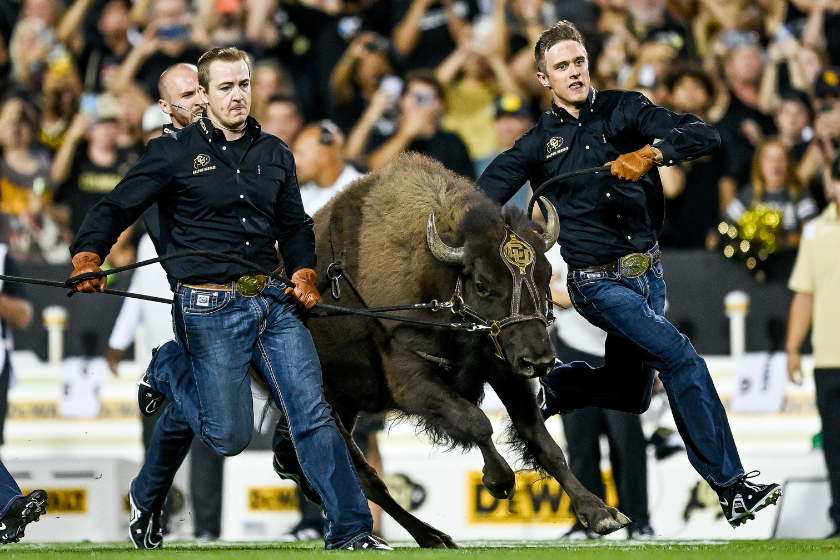 I knew Ralphie was going to be No. 1 before making this list. I couldn't not put a buffalo as the top choice. Just look at how she runs. Something could go horribly wrong, which only adds to the spectacle.

This article was originally published on September 10, 2021, and has been updated since.