When Bulldogs Meet Longhorns, The Ending Is Never Pretty 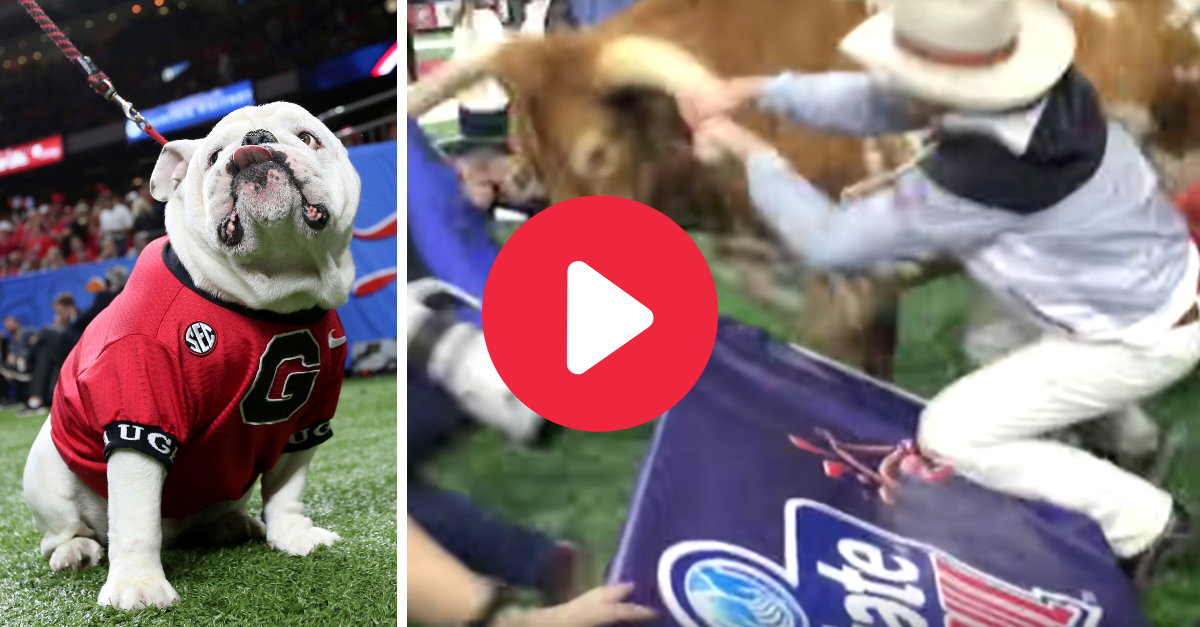 The universities of Georgia and Texas had met four times prior to the 2019 Sugar Bowl. The Texas Longhorns won the first three games of the series, while the Georgia Bulldogs won the last meeting at the 1984 Cotton Bowl. Since then, A LOT has changed.

Texas quarterback Sam Ehlinger scored all three of the Longhorns’ touchdowns as head coach Tom Herman’s program defeated Georgia, 28-21, in that Sugar Bowl. UT was in the driver’s seat from start to finish while locking up the program’s first 10-win season since 2009. Texas dominated all night, and even the Texas Longhorns mascot Bevo decided to get a piece of the action when Uga the Bulldog came over for a meet-and-greet. When they came face-to-face, the giant steer caused everyone in the nearby area to flee in moment of sheer terror.

Live mascots at college football events are no big secret. From Ralphie the Buffalo running around the University of Colorado to the War Eagle of Auburn, sometimes universities like to take their school’s nicknames a little too seriously, and that almost got a white English bulldog squashed on live television.

Prior to the Sugar Bowl in New Orleans, cameras caught two of the country’s most iconic mascots heading for a quick hello on the field during pregame. As Uga X ? the University of Georgia’s mascot ? approached Bevo XV, the 1,800-pound steer from Texas, the latter mascot was not interested in getting a selfie for Instagram.

When Uga and his handlers approached, Bevo charges through his enclosure like wet toilet paper and sent everyone in the area running for their lives in a reminder that giant steers and small bulldogs probably shouldn’t mix.

Texas Longhorn reporter for the Austin Statesman Danny Davis risked life and limb at the Mercedes-Benz Superdome to capture the mascot meeting in all its glory.

Bevo is not here for this mascot meeting. #HookEm pic.twitter.com/KXgaQzGm0W

It’s uncertain at this point if Bevo will be fined for lowering his head and targeting Uga on the play.

Even the alternate angles, complete with live calls from the ESPN broadcast team, makes this exchange better and better every time you see it.

RELATED: The 20 Most Electric Entrances in College Football

It didn’t seem like Bevo was riled up in any way beforehand, but after watching an animal capable of goring anyone it pleases nearly trample a bulldog wearing a red sweater, maybe it’s time to reconsider actually letting animals hangout with each other at football games?

“We were trying to turn him around to take a picture, and he made a run for it,” Patrick Dowell, one of Bevo’s handlers, told ESPN. “He was just going to say hi.”

No one was hurt, and we found a greater appreciation for Bevo’s handlers, who grabbed onto the steers horns and held on for dear life. Off the field, Longhorns and Bulldogs are fine to coexist, but get them on a football field with a New Year’s Six bowl title on the line, and even the mascots want to get a piece of the action.

An Allstate Sugar Bowl win on Tuesday night felt great, but watching Texas’ longhorn and Georgia’s bulldog showdown in epic mascot mayhem might just feel better for Longhorn fans than any College Football Playoff appearance could ever do.

Credit is going to land on the team’s star quarterback, but Bevo the longhorn steer set the tone for Texas’ domination long before footballs starting flying in New Orleans.

This article was originally published January 2, 2019.

MORE: Crazy Millennials Petition for Miami’s Mascot to Vape, Not Smoke a Pipe