Not only was Bobby Bowden the best football coach in Florida State history, but he is also one of the best coaches in the history of college football and the NFL.

In 34 seasons, Florida State head coach Bobby Bowden led the football program to 315 wins. And although all of them were important, there are 10 that stand out as the most monumental to his legacy and the success of the Florida State Seminoles football team. 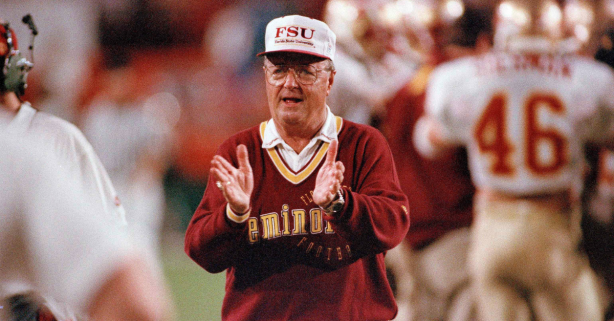 Throughout his tenure with the 'Noles, former FSU coach Bobby Bowden had countless big games, and most of them came against their biggest rivals in Florida and Miami. But that doesn't account for all of them.

The 1993 and 1999 seasons also played a huge role in his career as his National Championships years, so any win on the road to a title is extremely important.

But of his 357 career wins with Samford (then called Howard), the West Virginia Mountaineers and Florida State University in his Hall of Fame career, which 10 really stand out as the most iconic?

For the first time since 1984, FSU was able to beat the Hurricanes, and they were ranked second in the country. If not for two early-season losses, this game in Doak Campbell Stadium may have been the one that propelled them over Miami into the NCAA National Championship game.

But despite beating the Hurricanes, 24-10, they would go on to win their third championship in seven years. But beating the eventual champs by two scores is huge and could have been bigger if not for losses to Brett Favre's Southern Mississippi or Clemson in the first two games of the season.

In just his second season with the Seminoles, Coach Bowden led them to a win over Florida for the first time and finished the season at 10-2. That's not bad since just two seasons prior, they finished the 1975 season at 3-8 under Darrell Mudra. After hiring Bowden from West Virginia, his first head coaching job where he spent six seasons, they got results almost immediately.

In his first year with the team, they went 5-6, but had a quick turnaround from there. Not only did it take just two tries to beat the Gators, but they did so easily, 37-9. This was the first of 17 wins against Florida in his career and would start a four-game winning streak against them as well.

The next game, after beating Florida for the first time, head coach Bobby Bowden brought his Seminoles to Orlando for his first bowl game as the head coach of Florida State. This started a streak that would break the record for most consecutive seasons with a bowl berth. Bowden coached them to 30 consecutive and Jimbo Fisher, the former offensive coordinator from 2007-09, added on to that with for 39 straight.

With a 40-17 rout of the Red Raiders, Bowden also won his first bowl game -- the first of 20 wins in bowl games. That streak of bowl appearances was ended in 2018 under Willie Taggart, but it is a streak that will be tough to break.

The following season didn't go quite as well as many would have hoped, beginning the year as the 17th-ranked team, but falling out of the top-25 after a big loss to Mississippi State. But one good thing did happen: Bowden's first win over the Miami Hurricanes. After losing the first two times they played, Bowden won in 1978 and then again in '79. Although the 'Canes weren't at the height of their success just yet, they were on the upward swing in the coming years.

Although his first season in Tallahassee wasn't an immediate success, finishing at 5-6, he had some big games that showed the program was already improving. In their fifth game of the season, the Seminoles traveled to Boston College to play the 13th-ranked Eagles and came away with a 28-9 victory. This was Bowden's first win against a ranked opponent as the FSU coach, a huge milestone that many coaches may take years to achieve, but took only half a season for Bowden. This was also his first win on the road with their only other win up to this point coming against Kansas State the week before.

The 1996 Florida Gators had just one loss during the entire season, and that came at the hands of the Seminoles in the final game of the regular season. With National Championship hopes for each team, this game was extremely important and really a must-win game for the 'Noles since there was no conference championship for them to bounce back in. With a 24-21 win over the top-ranked Gators, this sealed their fate as one of the two teams who would play for the National Championship in the Sugar Bowl. It didn't end with Bowden's first title, but this win was huge in getting them to that stage.

Beating the Miami Hurricanes is always on the list of musts for a successful Seminoles' season. But in 1993, it was a huge game to continue their undefeated season and stay as the top-ranked team in the country. With a 28-10 win over the 'Canes -- Florida State sixth win of the season -- the Seminoles were past possibly their toughest opponent. They did lose to the second-ranked Notre Dame Fighting Irish a few weeks later, but that wouldn't stop them on their way to their first National Championship.

After coming so close for six seasons of just one or two losses, the Seminoles finally made it to the National Championship and earned an 18-16 win over the Tom Osborne-led Nebraska Cornhuskers in the Orange Bowl. Winning the school's first title is definitely iconic, especially since they were playing two of the best teams of the last two decades on a regular basis. Charlie Ward, during a Heisman Trophy season, led an amazing offense and helped the 'Noles win against a Nebraska program that was as successful as any over the last few decades.

The only game that could come close to a National Championship is a game that basically is a play-in game to that title game. Like in 1996, the Seminoles had to end their season against the Gators, once again one of the top teams in the country. With a loss, it would probably be Florida who made the trip to New Orleans for a chance at the title, but a 30-23 win propelled FSU to another shot at another championship.

It wasn't the close game that many would think against Michael Vick and the Virginia Tech Hokies, but the Seminoles would go on to win their second National Championship in school history with a 46-29 victory in the Sugar Bowl against a team they would play against in the ACC. This was the second of three-straight trips to the title game and four out of five from 1996 through 2000 under the former Florida State head football coach. Only coming away with one win in those four games is tough, but better than being the Buffalo Bills and not winning a single one.

Winning national titles under Bobby Bowden, along with so many victories, seals him as one of the best head coaches to ever grace college football's sidelines.

This post was originally published on May 27, 2019, but was brought back after the death of a college football legend. Rest in peace, Bobby.