Heading into the final game of the 1994 college football regular season, the Florida State Seminoles and Florida Gators were rolling. Both teams boasted a 9-1 record, a top-10 ranking, and were positioned to potentially face the undefeated Nebraska Cornhuskers for the 1994 National Championship. All signs pointed to another in-state classic until the Gators blew the doors off the Seminoles.

Steve Spurrier's Florida team jumped out to a 21-point halftime lead and had scored 31 unanswered points as the game entered the fourth quarter. Quarterback Danny Wuerffel accounted for all four touchdowns as thousands of FSU football fans scrambled towards the exits. Just when it seemed like the game was over, head coach Bobby Bowden's Seminoles came to life and mounted one of the greatest comebacks in sports history. Today, it's simply remembered as "The Choke at Doak."

Led by quarterback Danny Kanell, Florida State came out in the second half determined not to go down without a fight in at home inside Doak Campbell Stadium.

"My only mindset in the second half was not to come back and win but to make it respectable," Kanell said. "We were getting embarrassed at home."

After mounting a 31-3 lead as the game entered the fourth quarter, Spurrier decided to have his Gators play conservatively on offense and counter FSU with a prevent defense -- the idea was to take as few risks as possible, which ironically, turned out to be his biggest mistake. 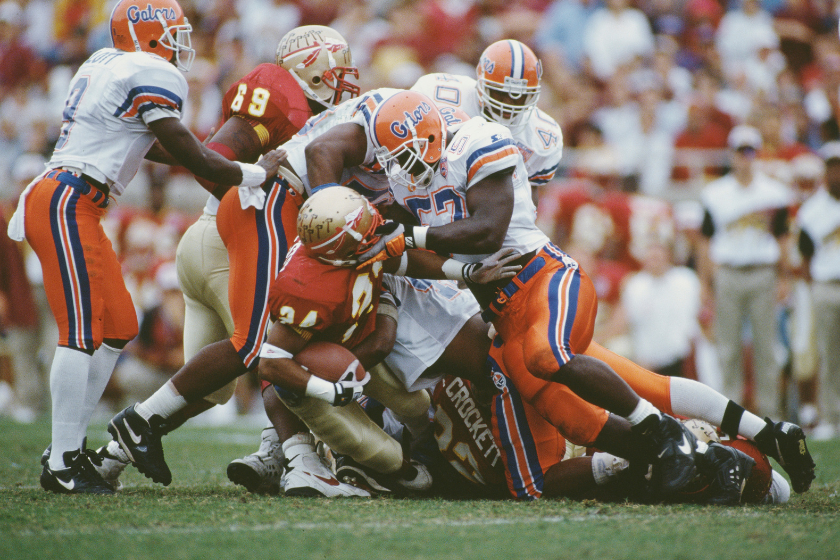 Offensive coordinator Mark Richt and Kanell orchestrated an underneath attack that picked apart the Gators relaxed defense. Zach Crockett scored early in the fourth quarter, then FSU followed up less than three minutes later with a 6-yard touchdown pass from Kanell to Andre Cooper. Several big plays by running back Warrick Dunn and a late interception by James Colzie helped bring the Seminoles all the way back. Then, Rock Preston's 4-yard plunge into the end zone made the score 31-30 with just 1:45 left to play.

With the game on the line, Bowden elected to attempt the extra point rather than go the two-point conversion and the win. It's a decision that certainly didn't hurt the 'Noles, but it may have been their only chance to earn the right to defend their national championship from the previous season.

Florida State kicked the extra point, and the game would end in 31-31 tie.

The Choke at Doak

RELATED: Rix to Sam Made "The Swindle in the Swamp" an Instant Classic

Despite the incredible comeback, the result didn't help either team in the polls, which kept both programs out of the national title game. Fortunately, the football gods were smiling down and scheduled a rematch between these two teams just one month later.

The 5th Quarter in the French Quarter turned out better for the Florida State football team, as they'd defeat the Gators, 23-17, to win the Sugar Bowl and secure the ACC program's 10th-straight season with double-digit wins.

Here is a classic made for my Italian alter ego Danny Kaneli from the 95 Sugar Bowl or 5th quarter in French quarter pic.twitter.com/4iE98rN8ni

A few years later, Florida State would go wire-to-wire as the top-ranked team in 1999 to win the national championship. That 1994 season may not have ended with the same hardware, but mounting one of the largest fourth-quarter comebacks in college football history, then avenging that matchup a few weeks later against your biggest rival?

Well, that might be remembered just as fondly as a championship in Tallahassee.

This article was originally published November 27, 2019.

MORE: Mark Richt to Mike Norvell: "Will You Do Me a Favor and Kick the Gators' Ass?"