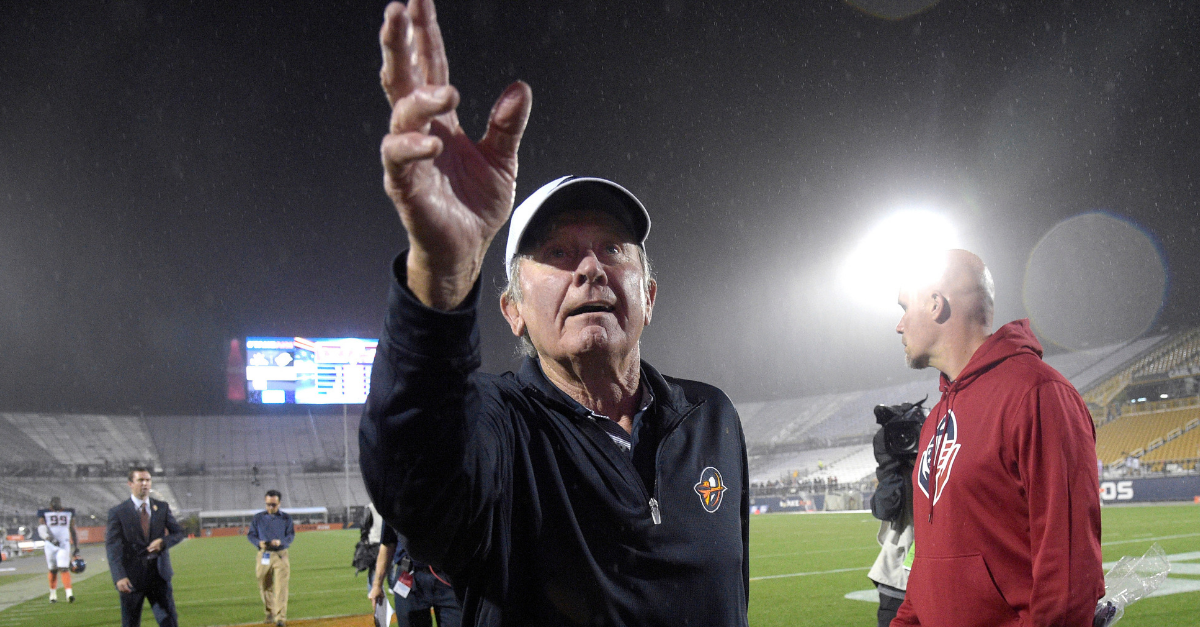 The king of zingers, one-liners, and trolling is back at it again. Steve Spurrier, a college football national treasure, has a penchant for taking shots at rival teams, coaches and players.

The Head Ball Coach has memorably called Florida State University ?Free Shoes University?, suggested the Georgia Bulldogs are an…undisciplined team and made fun of Tennessee?s lack of Sugar Bowl game appearances. The best time to take a dig at one of those teams is clearly all the time.

Even though the 73-year-old Spurrier is now coaching the Orlando Apollos in the Alliance of American Football league, he was still able to troll Volunteer fans after Orlando?s second win of the season on Sunday.

Spurrier claims the San Antonio Commanders crowd today was louder than Rocky Top ever was.

Related: 4 Reasons Why Steve Spurrier?s AAF Debut Was Both Hilarious and Awesome

He was asked about coaching on the road in front of the San Antonio Commanders crowd. His response: “I think it was just as loud as Rocky Top, to tell you the truth. And I know The Swamp is a little bit louder.”

If you haven?t been to UT?s Neyland Stadium, it is definitely a rambunctious atmosphere. The band plays ?Rocky Top? every other down, which you might not even hear given how loud the fans get.

Don?t tell that to Spurrier, though. When the Head Ball Coach manned the sidelines in Gainesville during the 1990s and early 2000s, he went 8-4 against the Volunteers.

His hatred for the the bright orange must?ve run deep, too. Spurrier once said the worst loss he ever endured at Florida was to Tennessee in 2001 because it ruined what he thought could?ve been a championship team. His Gators were ranked No. 2 in the country and were favored by 17 points before the Vols upset them 34-32 in what would be Spurrier’s final home game in The Swamp.

Of course, Spurrier shouldn’t dwell on that loss too much. He should instead remember the 1996 season, during which his Florida Gators beat Tennessee 35-29 and picked off Peyton Manning four times before going on to win UF’s first ever national championship.