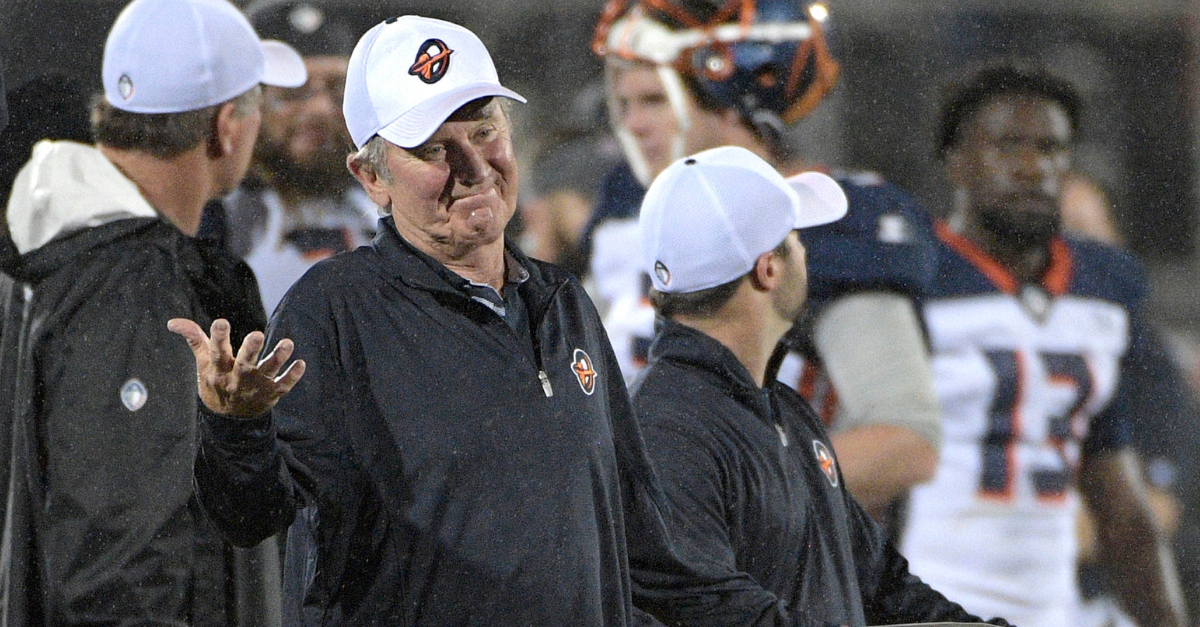 The Alliance of American Football?s debut weekend was a smashing success. Thanks to a bunch of awesome rules, memorable players and high-profile coaches, it?s easy to see why the league?s inaugural weekend was well-received.

Trent Richardson is back in Alabama taking handoffs and scoring touchdowns for the Birmingham Iron. Former Aggie Trevor Knight quarterbacks for the Arizona Hotshots. Even punter Brad Wing is booting balls for the Memphis Express.

But no one increased the AAF?s entertainment level this weekend like Steve Spurrier did. The former Florida Gators and South Carolina Gamecocks coach is now the head coach of the Orlando Apollos, and he was everything you could ask for on the sidelines during Orlando?s first game against the Atlanta Legends on Saturday night.

Here are four reasons why:

"Tell him to catch it this time."

?Tell him to catch it this time? sounds like something straight out of a movie. Everyone knows Spurrier has a great sense of humor. We?re all just lucky enough to experience it while he coaches.

Imagine if we got to listen in on Bill Belichick tearing a player apart for fumbling on the goal line. The AAF also mic?d up its replay reviewers, which provides a great look at the human element of the process. The NFL could take a few transparency pointers from this new league.

Related: The Alliance of American Football Has Arrived. Here’s Why You’ll Love This League.

You thought Spurrier, THE Head Ball Coach wasn?t gonna pull something out his bag of tricks? I?m kicking myself for not placing money on him running something like this.

Apollos quarterback Garrett Gilbert better be ready for flea flickers and more double reverses the whole season, because Spurrier isn’t afraid to call any play at any time. And yes, the Orlando Special sounds better than the Philly Special. Better yet, let?s just call it the Spurrier Special.

Steve Spurrier could really just be a synonym for scorer, because he?s done a lot of that while coaching football teams.

He implemented the ?Fun ?n? Gun? passing offense that turned Florida into a scoring juggernaut in the 1990s, and he?s off to a similar start with the Apollos. Orlando won 40-6, but he had 50 points in sight.

And because he?s Steve Spurrier, he had to throw in a zinger about one of those teams. Spoiler: it was the Washington Redskins.

So @SteveSpurrierUF said this Saturday night after his 40-6 victory with the AAF Orlando Apollos left him 6-0 for his career in debut coaching games: “I even won with the Redskins, and that’s not easy to do.”

4. The Visor is Returning

The answer we need. Why was @SteveSpurrierUF not in a visor last night??? He says it won't happen again pic.twitter.com/TOnvuwQVjh

The most prominent question surrounding HBC was where was his signature visor? Thankfully, it sounds like we?ll get to see it next game.