Alabama football coach Nick Saban is ruling the greatest college football dynasty of all time. There's no denying it. Six national championships would be a lot in 50 years, let alone 15 seasons with the Alabama Crimson Tide. BCS or College Football Playoff, it doesn't matter to Saban. He's conquered both of them. Every other school wants a slice of whatever magic Saban has cooked up as head coach of the University of Alabama. Think of it like a secret recipe, and schools have gone great lengths to hire countless Saban assistants in hopes of recreating the dish. Just check Saban's lengthy coaching tree.

There's a reason Coach Saban's teams have been great as they are. No, there are multiple reasons. He works his tail off, as Alvin Kamara will tell you after receiving 105 recruiting letters in the mail from the coach one day. He chews his assistant coaches out, as former wide receivers coach Josh Gattis will tell you. He even cultivates relationships with players by joking (yes, he does have a sense of humor!) with them, as Josh Jacobs will tell you.

Terry Saban, or simply Miss Terry, is the real reason Alabama has stayed on top of the college football world for so long. She's responsible for securing top-flight recruits like Kamara or Jacobs, keeping Saban in check, giving reporters plenty of laughs at press conferences and even suggesting coaching tips. 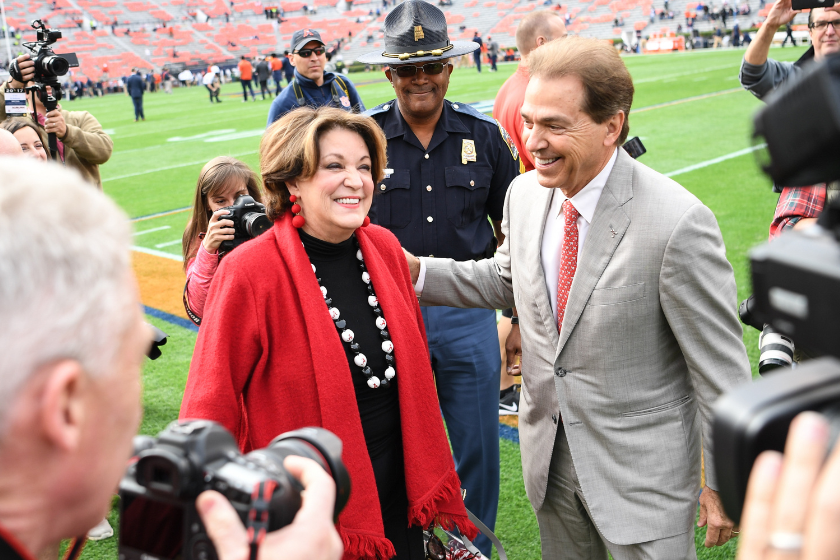 Miss Terry is the real MVP. She works behind the scenes. If Crimson Tide football were a movie, Saban would be the star actor but Terry is the director, producer and screenwriter of this Oscar-winning film.

When Saban was working his contract with LSU, Terry told the Wall Street Journal that she was just as much a part of the negotiation as he was. Add another title to her name: Agent.

Terry also reportedly gets forwarded all of Saban's emails and is copied on all of the ones he sends. That makes her his executive assistant of sorts. What can't this woman do?

Maybe most important is Terry's effect on potential recruits. She transforms into a socialite and host after Alabama's A-Day, when the Sabans welcome recruits and their families into their home on Lake Tuscaloosa.

While Saban makes the initial impression with his championship rings and gives NFL-hungry players his spiel to play at Bryant-Denny Stadium, it's Terry that makes players feel like they never even left home. When these wide-eyed high school kids take official visits, Terry will spend numerous hours alongside them.

There's a reason Miss Terry is known as Alabama Football's First Lady. Without her guidance, Nick Saban would probably be lost.

She gives Saban coaching advice from time to time, telling him to run the ball more often when it's called for. When he snapped at ESPN's Maria Taylor over Alabama's quarterback situation following a win over Louisville in 2018 (a video that was instantly memed across the Internet), Terry corrected him because he was in the wrong. He apologized to Taylor shortly after.

After Saban underwent hip replacement surgery and was forced to rest following it, Nurse Terry came home to find him standing in the driveway. She literally put him in his place, according to an ESPN article.

"What are you doing out here?" she asked.

Saban shrugged and deadpanned, "You left me all alone, and there's nothing to do."

"You're not supposed to do anything," Terry shot back. "Get back in your chair!"

How Did Nick and Terry Meet? 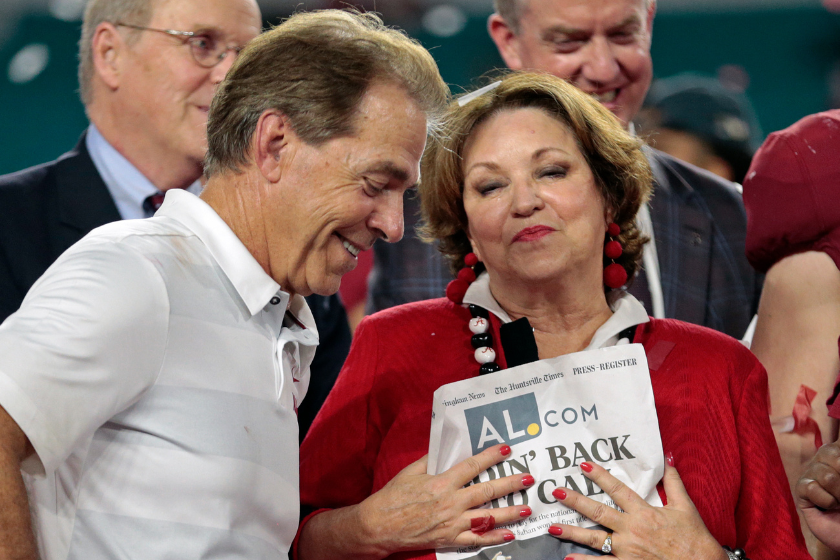 Nick and Terry met for the first time in seventh grade at a science camp. Years later, they started dating while he was attending Kent State and Terry was teaching in West Virginia. Like two seventh graders, they sent each other love letters to account for the long distance.

In 1968, the pair went on their first date. Saban took her to see "Gone with the Wind" at a theater in Fairmont, West Virginia. Three years later they got married and have been together ever since.

The Sabans have two kids, son Nicholas and daughter Kristen Saban. They also have grandchildren now.

Until reaching Tuscaloosa, the couple had never really settled down anywhere. His illustrious coaching career has taken them all over, including Toledo, Michigan State, LSU and to the NFL with the Miami Dolphins as the head coach. The longest he stayed at any place was five years.

When Saban earned his first bonus check as defensive coordinator for the Cleveland Browns, he paid off the mortgage to Terry's parents' house. That comes as no surprise, because giving back is a common occurrence for the Sabans. 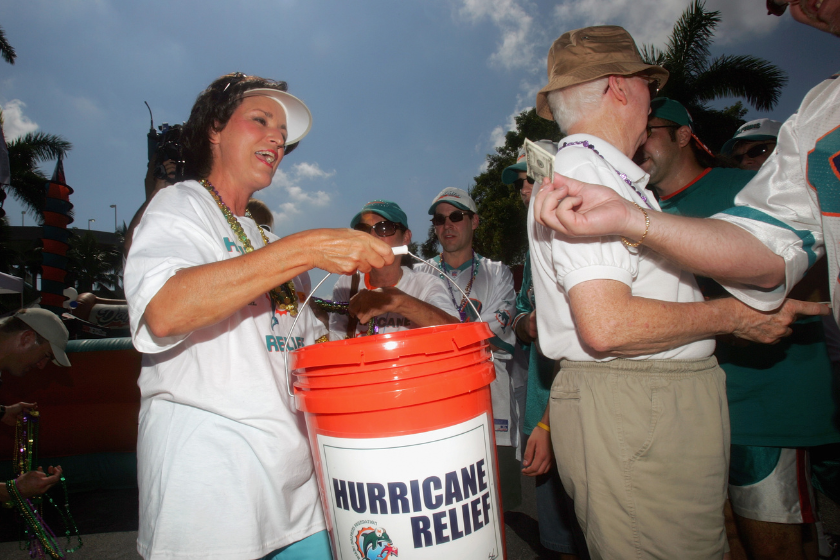 Terry is an integral part of running Nick's Kids Foundation, which has given $8 million to more than 300 organizations and charities throughout Alabama and the region. They've also partnered with Habitat for Humanity to build 17 homes for those in need following a 2011 tornado.

All of Miss Terry's off-the-field philanthropic work shouldn't overshadow her football knowledge, though, which is impressive considering how little she knew before meeting her husband.

"She did not know what a first down was when we first started dating, and there's no doubt in my mind that she thinks she ought to be the head coach at Alabama right now," Saban said. "No doubt."

"She is a hell of an assistant, even though she thinks she's the head coach, which when she's around, I always make her think that."

For now, we'll have to settle for Terry and Nick leading the Crimson Tide to more national championship games. Alabama could likely return to the College Football Playoff again if they take down Georgia in the SEC Championship Game.

The Alabama coach secured another national title thanks to Heisman Trophy finalists and touchdown machines Mac Jones and DeVonta Smith last year. Who knows how far the Tide can go with Bryce Young at the helm in 2022? We're sure Nick Saban's wife will be supporting him all the way. It doesn't matter if it's a random Saturday matchup against Mississippi State or an early season battle against Texas, Miss Terry has her husband's back.

This article was originally published June 24, 2019.