For anyone who watched Bo Jackson play, and the rest of us who live vicariously through his jaw-dropping highlights, it's no secret the pride of Bessemer, Alabama was a once-in-a-generation athlete.

Aside from LeBron James or Mike Trout, there aren't many athletes capable of making everyone around them look like amateurs. When it came to Vincent Edward Jackson, he was miles ahead of his peers.

On the baseball diamond, Jackson thrived. Being a full-time MLB player with the Kansas City Royals was Jackson's true passion, showcasing transcendent speed and power in a four-year stretch when he hit 107 home runs, drove in 304 RBIs and stole 78 bases. On the gridiron, Jackson was dominant in a part-time role. Of every running back since the NFL's merger with at least 500 carries, Jackson's 5.40 yards per rush ranks first all-time.

It should come as no surprise that prior to Jackson entering the 1986 NFL Draft, the 1985 Heisman Trophy winner and two-time Consensus All-American from the Auburn Tigers was a lock to be the No. 1 overall pick. Had a crazy story of deception not changed everything, Jackson, who ended up as the top pick of that '86 draft, would've played for the Tampa Bay Buccaneers. He chose to pursue baseball before Tampa Bay forfeited his draft rights, and the Los Angeles Raiders picked him 183rd overall in the 1987 NFL Draft.

You know what happened next.

In today's game, the NFL Scouting Combine in Indianapolis puts a microscope on everything. From weird interview questions to measuring hand size, nothing is off limits with millions of dollars on the line. The futures of teams like the Detroit Lions, New Orleans Saints, Baltimore Ravens, Philadelphia Eagles, Seattle Seahawks and ever other franchise ride on their respective scouts' evaluations. At ESPN, draft experts like Todd McShay and Mel Kiper Jr. sift through the data to dissect hundreds of draft-eligible players, but some guys just jump off the page.

When it came to Bo Jackson, his talent was obvious.

An apparent scouting report of Jackson surfaced online in 2020. It was written by a San Francisco 49ers scout named Tony Razzano and was dated December 1985, which was shortly before the end of Jackson's record-setting last year of college football. In it are nuggets that foreshadowed just how great he'd be, aligning Jackson with some of the greatest running backs in NFL history:

"Has all the super characteristics to be the top player to ever come out of college including Hershel Walker and O.J. [Simpson] and all the other great backs (Jim Brown, etc.)."

"A super producer. I am in awe over his accomplishments as a football player and baseball player. Has the physical ability to do anything in sports and be a champion. A vary rare gift."

Jackson checked all the boxes -- he was given a nine out of 10 in nearly every category under "Playing Specifics," probably because giving him a perfect score debunks the phrase "nobody's perfect."

At 6-foot-1 and 222 pounds, however, one particular number stands out the most -- Under "Speed," Jackson's 40-yard dash time of 4.12 seconds is on par with the fastest humans on the planet. 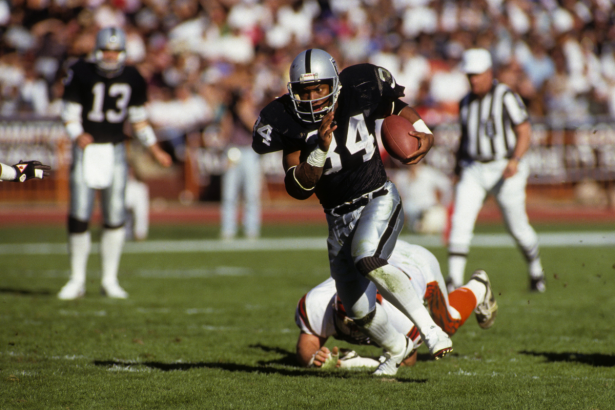 Jackson once said during an ESPN interview that he actually ran a 4.13 40-yard dash in college, which sounds like another Bo Jackson myth you can't help but believe is true.

"I was on my way to track practice, and they had the combine there -- there had to be 20 or 30 guys there -- and we were inside running. And the coach says, 'Hey Bo, we got a bunch of scouts here from all over the country and we got a little combine here, and they're timing guys for the 40. Why don't you come in and run a 40 for them?'"

It took some convincing for Bo, who was on his way to workout with former Olympic sprinter Harvey Glance, but eventually, he decided to run.

"I ran my first 40, and about five yards from the finish line, I kind of let up and just cruised through, and I ran a 4.3. As I'm walking back, my coach is walking towards me. He said, 'Hey, why don't you run the damn 40 and give these people what they want.' So I said, 'Alright. But you gotta open the back door,' because they only had about 10 to 15 yards of space for you to stop once you crossed the line... So I got down, and everything was done electronically, and I didn't find out until after track practice what I'd run. And some of the guys that had stopwatches, they had me at a 3.9 or 4-flat with stopwatches, but the electronic timer got me at a 4.13."

During a Super Bowl party back in 2019, world record holder and track and field legend Usain Bolt matched Ross' 40 time despite not wearing spikes. Let's repeat that another way: Bo Jackson was faster than the world's fastest man.

Bo Jackson's urban legends never get old, but this one, it seems, is anything but myth. We already knew he was a touchdown machine and one of the most talented and fastest players in NFL history. But he really may be the greatest athlete to ever live.

MORE: Bo Jackson's Net Worth: How Football & Baseball Made Him Millions