Many have tried, but few athletes have had the success in multiple sports like Bo Jackson did. But despite a career cut short by injury, did his success lead to tons of money and a high net worth today?

Jackson, who starred as both a football player and baseball player in the 1980's and 90's, made quite a bit of cash in sports and is one of the greatest athletes of all time, and probably the most successful dual-sport athlete in history. Who else could crush home runs 475 feet and run the fastest 40-yard dash ever.

Vincent Edward "Bo" Jackson was born on November 30, 1962 in his birth place of Bessemer, Alabama. While attending McAdory High School during his early life in McCalla, Alabama, he was a star in multiple sports, rushing for over 1,000 yards as a running back on the football team, hitting 20 home runs for the baseball team, and was a two-time state-champion in the decathlon. He was so dominant in the decathlon that he never had to participate in the final event because he had built such a lead in points and couldn't be caught.

As for his personal life, Jackson is now married to his wife Linda Jackson and has three children, sons Garrett Jackson and Nicholas Jackson, and a daughter, Morgan Jackson. Bo and Linda raised their children in Burr Ridge, Illinois.

The Most Athletic RB of All Time 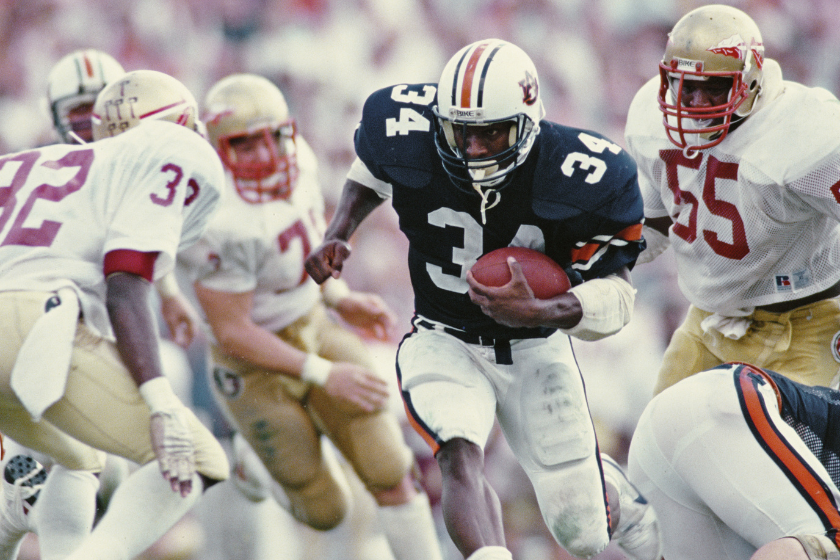 Bo Jackson was selected in the second round of the 1982 MLB Draft by the New York Yankees, but he decided to attend Auburn University on a football scholarship instead so he could fulfill the promise to his mother that he would be the first member of his family to attend college.

Jackson didn't just play college football. He continued to play multiple sports, being a member of the Auburn Tigers football team, baseball team and track and field team. He could have easily chased careers in all three of these sports, but focused more on football and baseball because they provided more money.

In 1985, Jackson solidified himself as one of the top running backs in the country with 1,786 rushing yards and 17 scores en route to winning the Heisman Trophy, the nation's most valuable player, and Walter Camp Player of the Year Award. 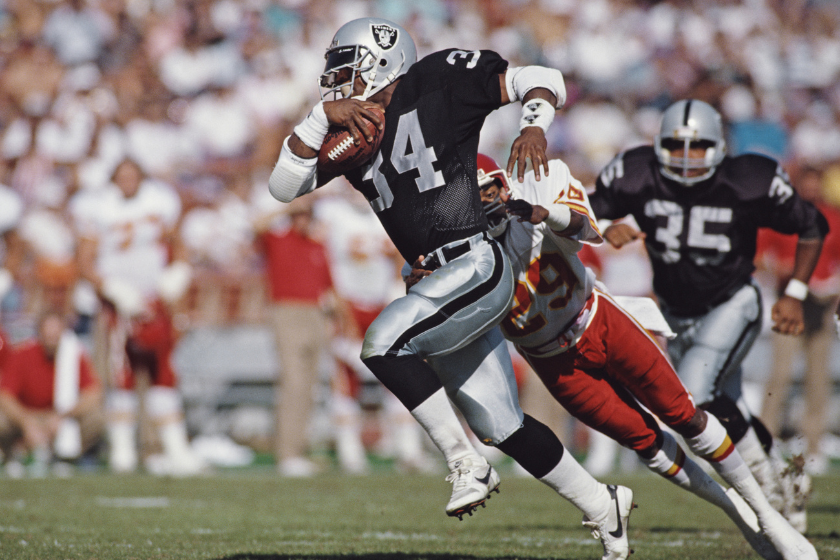 Jackson would be selected with the first pick in the 1986 NFL Draft by the Tampa Bay Buccaneers, but he refused to play for them because Bucs owner Hugh Culverhouse lied to him during his final season of college baseball, leading to his ineligibility.

He played professional baseball for the Kansas City Royals during the 1986 season before Tampa Bay forfeited his rights prior to the 1987 NFL Draft. Though he wanted to focus on baseball, being drafted by the Los Angeles Raiders and having owner Al Davis offer a contract that not only paid him five-year, $7.4 million contract -- the highest total for a non-quarterback in NFL history at the time -- but also allowed him to finish the baseball season.

Even though Jackson is one of the best athletes in professional sports history, he didn't have the NFL success he probably should have due to a hip injury. His football career was brought to an end in 1990 when he dislocated his hip. In just four seasons, Jackson appeared in 38 games and rushed for 2,782 yards and 16 touchdowns. His final season in the NFL came in 1990, which was his only appearance in the Pro Bowl.

Dominance on the Diamond 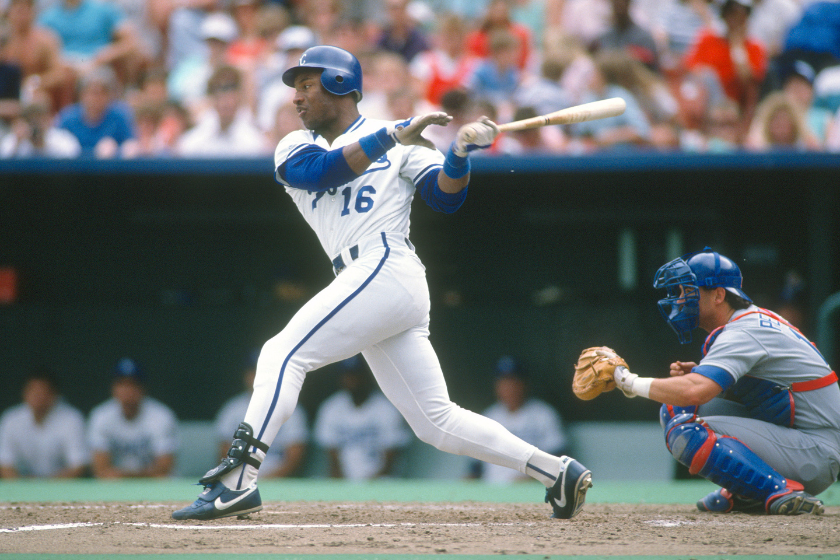 Jackson was drafted by the Kansas City Royals in the 1986 Amateur Draft and vowed to play for them if taken by the Bucs in the NFL Draft. He signed a three-year deal worth $1.06 million dollars to play baseball and spent the first 53 games in the minors with the Memphis Chicks before being called up to the Royals' roster in September.

The following year was his first full season in the majors. He hit 22 home runs and drove in 53 RBIs. In 1989, Jackson had his best statistical season after posting a .256 batting average, 32 home runs and 105 RBIs. He also made the All Star Game and was named the MVP of the game.

Jackson played eight seasons in Major League Baseball -- five in Kansas City, two for the Chicago White Sox and one for the California Angels. He finished his career with a batting average of .250, 141 home runs, and 415 RBI's.

According to a 1991 articles in the Los Angeles Times, Jackson had a three-year, $3-million contract with Nike during the height of his pro career. Pepsico and AT&T, who he also did commercials for back in the day, were also paying him a reported $500,000 per year back then. It's unclear if he has significant endorsement deals today.

One of the most popular phrases surrounding Jackson was the "Bo Knows" campaign for a Nike shoe. The ad campaign put Bo in commercials where he was was trying other sports like tennis and golf.

The American football player is also extremely popular in the video game world as the face of 1989's Tecmo Bowl for the NES. Jackson's character in the game was basically unstoppable. There was also a reference back to this game in a Kia commercial in 2016 featuring Jackson driving a Kia Sorento through the game.

He also made appearances on popular shows in an effort to start an acting career after his athletic career ended. He appeared on the TV shows "The Fresh Prince of Bel Air" and "Married...With Children."

Additionally, Bo was a walking ESPN highlight throughout his athletic career.

What is Bo Jackson's Net Worth Today? 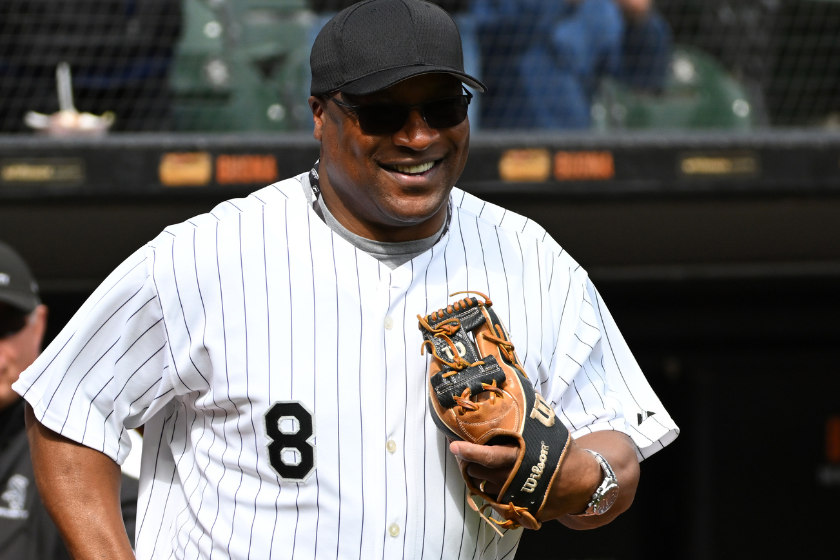 As one of the most famous athletes of all time, Jackson made quite a bit of money even though he probably could have made much more if his career wasn't derailed by a hip injury. However, with his ability to do so many different things, Jackson has still managed to build up a nice value and has an estimated net worth of $25 million, according to Celebrity Net Worth. Still, that isn't nearly as much as it could have been considering his talents and abilities.

The College Football Hall of Fame member reportedly made nearly $13 million from his days in the NFL and MLB. Considering he's still one of the most recognizable names in football, Bo Jackson's net worth figures to keep going up.

MORE: Brian Bosworth Dominated College Football, But Where is "The Boz" Today?