The Crazy Reason Why Bo Jackson Never Played for the Bucs 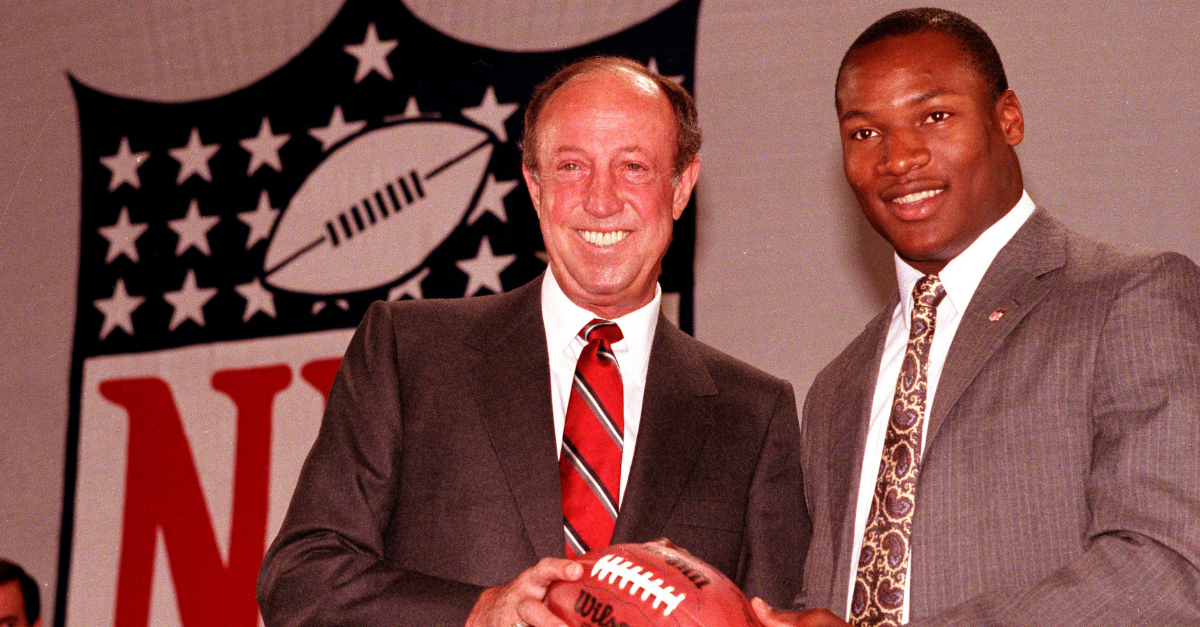 One of the best athletes in American sports history, Bo Jackson is remembered by most in the uniforms of the Auburn Tigers, Los Angeles Raiders and Kansas City Royals. But what about the NFL team that actually drafted him first?

In 1986, the Tampa Bay Buccaneers selected Jackson with the first overall pick in the NFL Draft, but Jackson had already told them he would never wear a Bucs uniform due to something that had taken place in college.

A card that Buccaneers fans sent Bo Jackson, to try and convince him to come to Tampa. Spoiler: It didn't work. pic.twitter.com/fgV3GNoWEw

Vincent Edward Jackson, a running back out of Auburn University, was not only a highly sought-after college football player, but also multi-sport star since high school who had his choice of professional sports.

He was selected first overall by Tampa Bay and owner Hugh Culverhouse. However, a past incident led to Jackson refusing to play for the owne,  as well as their refusal to allow Jackson a professional baseball career.

While playing baseball for Auburn, Jackson went on a trip to Tampa to visit with the team. Culverhouse told Jackson that the private jet and trip were cleared by the NCAA and that it wouldn’t impact his eligibility for the rest of his college baseball season.

Bo Jackson was drafted No. 1 by the Bucs in 1986, but he refused to play for them because he thought they sabotaged his eligibility.

◽️ The Royals drafted Bo in the 4th round and he chose baseball.

◽️ A year later, the Raiders picked Bo in the 7th and let him play both sports. pic.twitter.com/RUdNSdQkem

When Jackson returned to Auburn, Alabama, his coach told him the trip was an NCAA rules violation and he would be ineligible to play for the rest of the season, leading Jackson to believe Culverhouse had lied to him on purpose. Jackson told the Bucs’ organization they could draft him, but he would not sign and play baseball instead.

There are stories that the Buccaneers did this all on purpose, trying to pull Jackson away from baseball to focus on his football career, but if that is true, it completely blew up in their faces and led to them wasting the top pick in the draft and had them picking first the following year.

Less than two months after being selected in the NFL Draft, Jackson was a fourth-round pick in the Major League Baseball Amateur Draft by the Kansas City Royals. Jackson stuck to his word and signed with the Royals, where he played for five seasons.

He had previously been drafted twice before this. Jackson was taken in the second round of the 1982 MLB Draft by the New York Yankees, and then again by the California Angels in the 20th round of the 1985 MLB Draft.

He had a pretty solid baseball career, even being selected to the 1989 All-Star game and winning the game’s MVP. That was his best season as a baseball player, hitting 32 home runs and driving in 105 runs. After five years with the Royals, he finished his career with two seasons with the Chicago White Sox and one with Angels.

After a season of not playing football, Al Davis and the Los Angeles Raiders drafted Jackson in the seventh round of the 1987 NFL Draft. Davis allowed Jackson to continue playing baseball and then join the team once his season was done. This was the way to get the former Heisman Trophy winner to play football again and make him a true two-sport star.

Jackson’s professional football career was also successful in four seasons, earning a Pro Bowl selection in 1990 with 698 yards and five touchdowns in just 10 games. In his first season with the Raiders, he had some of his most memorable moments in the NFL.

Thirty years ago today, on his 25th birthday, Bo Jackson cemented himself as an NFL icon with one unforgettable game. More: https://t.co/9lKJUZk2pR #BoKnows pic.twitter.com/nD3A37hycc

In just his fifth NFL game, Los Angeles played the Seattle Seahawks. Jackson finished the game with 235 yards on 19 touches and three total touchdowns. This included dragging Brian Bosworth into the end zone.

Due to a hip injury, his football career lasted just four seasons and his baseball career would end in 1994, but there is no doubt the Tampa Bay Buccaneers may have one of the worst draft picks in sports history, taking a player who refused to play for them after their own blunder.