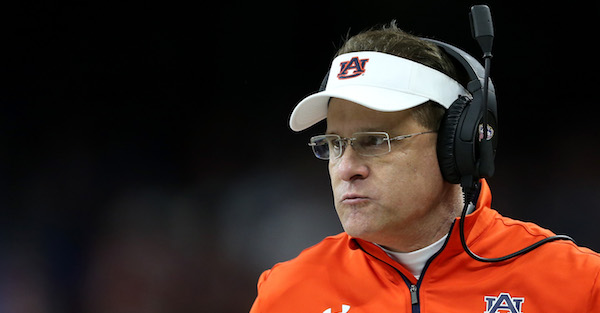 Despite being in contention for a potential College Football Playoff spot, Auburn may face a coaching vacancy this offseason.

Gus Malzahn is reportedly interested in returning to his home state and is considering the head coaching position at Arkansas, according to Sports Illustrated’s Bruce Feldman.

If that’s the case, the Tigers reportedly plan on bringing in a coach with successful ties in the SEC.

Multiple sources told Football Scoop?s Scott Roussel that Auburn is apparently “kicking the tires on Bobby Petrino as a backup plan” should Malzahn accept the position with the Razorbacks.

Petrino was fired during the following offseason after a motorcycle crash revealed an inappropriate relationship with Jessica Dorrell, a former All-SEC volleyball player whom he had hired as student-athlete development coordinator for the football program after previously serving as a fundraiser in the Razorback Foundation.

One year later, he led Western Kentucky to an 8-4 (4-3 Sun Belt) record during his only season with the Hilltoppers, before returning to Louisville — where he previously coached from 2003-06 — in 2014. Petrino has since led the Cardinals to a 74-26 (45-17 AAC) overall record, which included a first-place finish in the Atlantic division in 2016.

Petrino was also the Atlanta Falcons head coach in 2007, where he controversially left before his first season was even over in order to take the Arkansas job.

It’s also worth noting that Petrino’s buyout has been reduced from $8.5 million to $4.25 million following the recent termination of former athletic director Tom Jurich, according to Football Scoop.