When going through the history books of "best nicknames in sports," Carnell "Cadillac" Williams has to be up there in most -- if not all -- lists. Even for those who don't really follow sports, the name Cadillac Williams is essentially synonymous with Auburn football and Alabama as a whole.

Prior to earning the moniker "Cadillac," Carnell Williams was a standout running back for Etowah High School in Alabama. As a 5-foot-11-inch All-American running back born in Gadsden, Alabama, Williams was the No. 16 prospect in the nation, the No. 4 running back in the nation and the No. 2 prospect in Alabama. The legend of Cadillac Williams was born. And from then on out, more people knew the name Cadillac than his actual name, Carnell. And as the interim coach of the Auburn Tigers heads into the Iron Bowl versus Alabama on Nov. 26, more fans will be reminded of one of college football's best nicknames.

But why "Cadillac"? What was it about Williams that earned him that name?

The Origin of "Cadillac Williams" 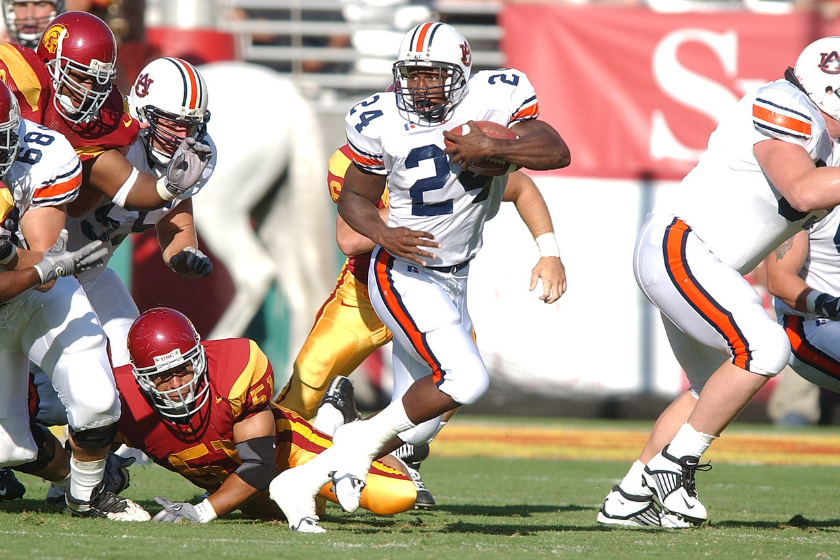 And while Williams was lighting it up on the football field, a Birmingham-based sportscaster would utter the soon-to-be nickname that made Carnell "Cadillac" Williams a household name for years to come. No, it wasn't a friend, teacher or parent who started the nickname. According to Cadillac Williams on the Huddle with Hars podcast with former coach Bryan Harsin, it was TV sportscaster Mike Raita who gave Williams the new name that would change his life forever.

Other than it sounding like a genuinely cool name, Raita gave the nickname Cadillac to Williams due to his style of play -- although Williams pushed back on the nickname at first.

"I'm like, that's not my name," said Williams. "I didn't like it at first. At the time, Cadillacs didn't have any sports cars. They were big, smooth and slow. I grew up with Cadillacs, and they went 85 miles per hour on the dashboard." For the Alabama standout, Cadillac wasn't the car he wanted representing what would turn out to be a lifelong nickname. "I'm like no, no, no, no. I'm a Ferrari. I'm fast, I'm quick, I'm elusive. I'm not no Cadillac."

I don't know about that one though: Ferrari Williams?

Even without Williams being on board with the name Cadillac, it stuck. And it stuck hard. No matter where he was, he was Cadillac, not Carnell. In fact, some people didn't even know Cadillac was a nickname. A lot of people really thought Cadillac was his first name; and while there are some silly names throughout NCAA and NFL history, Cadillac isn't on the birth certificate. Eventually, Williams figured the nickname wasn't leaving, so it was time to embrace the name instead of run from it.

Following a highly impressive high school career, Williams committed to Auburn University, staying in his home state of Alabama, where he would continue the excellence he showcased in high school. As the third running back on the depth chart his freshman year, it wasn't until his 177-yard performance against Arkansas that would prompt the Auburn Tigers to put the keys into the ignition of Cadillac Williams as their daily driver moving forward. In his four years as an Auburn Tiger, Cadillac Williams had 4,173 scrimmage yards and 46 total TDs. In both 2003 (17 TDs) and 2004 (12 TDs), Williams ranked first in the SEC for rushing touchdowns, while ranking No. 7 in the SEC for his 45 career rushing TDs.

In his four seasons with the Tigers, Cadillac Williams would break the all-time Auburn career records for most rushing attempts set by Joe Cribbs, as well as most touchdowns set by Bo Jackson. On top of that, Williams earned nine SEC Player of the Week honors -- the most in SEC history. 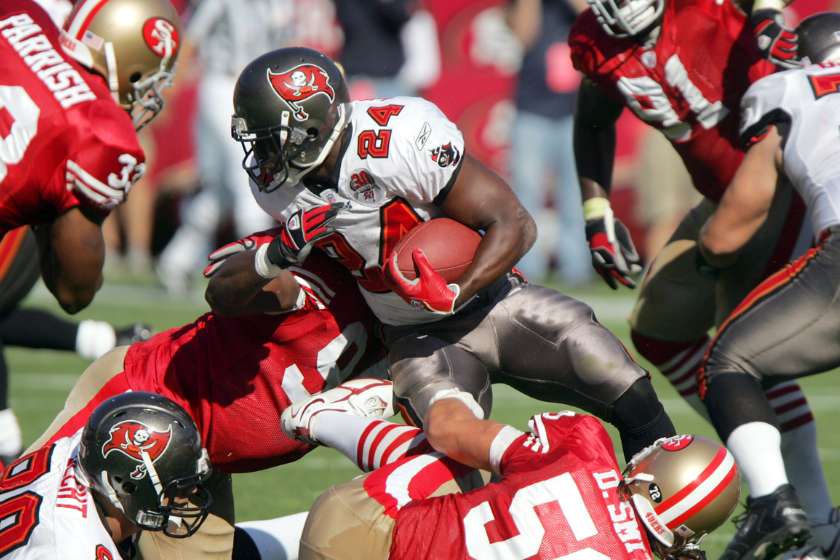 After Williams' record-setting career with the Auburn Tigers, he entered the 2005 NFL Draft as a highly sought-after prospect. After watching two running backs -- Ronnie Brown and Cedric Benson --  get drafted before him in the first round, Williams was selected by the Tampa Bay Buccaneers as the No. 5 overall pick.

The rookie season went well for the 23-year-old running back, as he was awarded the 2005 NFL Offensive Rookie of the Year. In that award-winning rookie season, he rushed for 1,178 yards and six TDs, which helped the Bucs claim the top spot in the NFC South with a record of 11-5, giving Tampa Bay a playoff berth. Going from No. 5 overall pick to NFL Rookie of the Year isn't too bad of a start to one's NFL career.

Then, however, Cadillac Williams started to run out of gas. Williams would spend six seasons with the Buccaneers; and in his seventh and final season, he headed north to play with the St. Louis Rams. Unfortunately for Williams, he would only start one game that season, as it was apparent Cadillac wasn't able to keep up with the surrounding Ferraris. Between tearing patellar tendons in both knees, playing behind a poor offensive line, and questionable offensive play-calling, Cadillac Williams would never eclipse his rookie season in the NFL. And following his one-year stint with the Rams, Cadillac Williams' NFL career was over.

Coach Cadillac Puts on a Headset 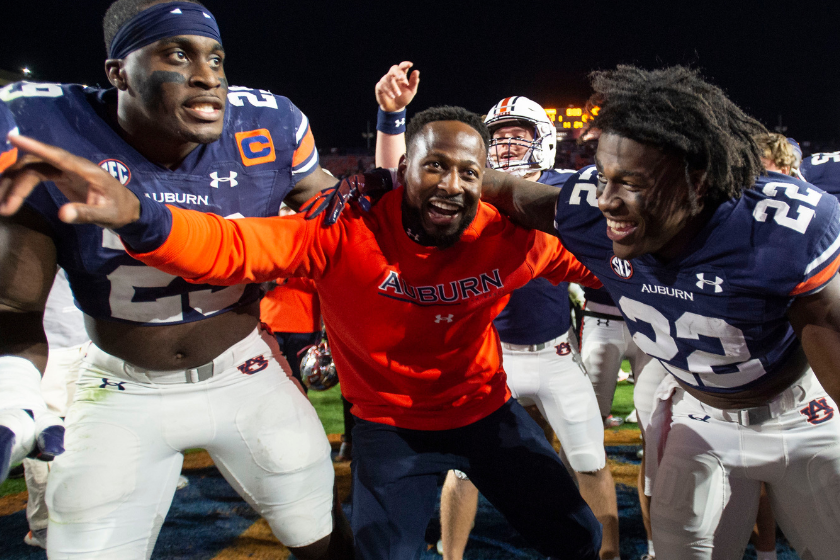 RELATED: The Bryan Harsin Era at Auburn Ends After Two Seasons of Disappointment

In the 2016 season, after spending a year at Henderson State, Cadillac was named the offensive graduate assistant for the University of West Georgia, where he'd begin what would turn into a fruitful football coaching career. Following his season with West Georgia, Williams was hired to be the running back coach for IMG Academy, which has now blossomed into one of the main prep academies for football players across the country.

Once his time was up with IMG Academy, he continued his coaching career as the running backs coach for the Birmingham Iron of the short-lived Alliance of American Football. Once the AAF ceased operations, Williams made his return to Auburn, this time as the running backs coach. While other coaches may have lost their jobs after head coach Gus Malzahn was fired, Williams remained when Malzahn's replacement, Bryan Harsin, kept Cadillac on his staff.

As the coaching life cycle goes, Harsin eventually was fired. And Cadillac Williams was named the interim head coach for the Auburn Tigers, a post he still holds. In fact, Cadillac is 2-1 as a college football head coach.

Opinions are mixed on whether Auburn should keep Cadillac Williams as its head coach, as there are a handful of coaches in the carousel who probably would be better. That being said, with some SEC coaches on the hot seat (looking at you, Kentucky and Florida), it's possible the former SEC running back stays within the conference.

However, as seen with Jeff Saturday in the NFL, sometimes it doesn't take the "best" coach to do a good job with an athletics program. So take note, LSU, Mississippi State, Ole Miss and Tennessee. Cadillac Williams may be parking himself at Toomer's Corner for a while. All in all, whether people like him for his undeniably awesome nickname, his skill with the football in his hands, or his ability to coach, Carnell "Cadillac" Williams will live in both the college football and NFL history books for a long time.

His college football days were more notable than his NFL career, but with a nickname like "Cadillac," Williams' legacy will live in American football for decades to come.