Report: Gus Malzahn has made a decision on his coaching future 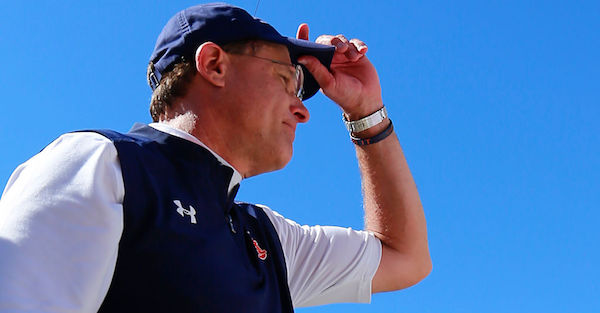 Just one day after dropping the SEC Championship game against the Georgia Bulldogs, Gus Malzahn has reportedly agreed to a new contract to remain at Auburn, per 247sports.

According to the report, Malzahn’s deal will “at least” be five years and could land him as much as $7 million annually.

Malzahn has a championship-level program at Auburn, most notably beating Alabama just weeks ago, but an previously had spoken to friends of the head coach who believed if Arkansas was to come calling, Malzahn would accept the dream job:

Friends of Gus Malzahn have been trying to convince me for 10 years that he's a Razorback at heart and will accept his "dream job" anytime it's offered. Well, it's about to be offered. We'll know in a few days if they know him as well as they think they do. #momentoftruth

Malzahn to Arkansas has been a hot rumor as of late and it would make sense that Arkansas would consider him a top target in the wake of firing Bret Bielema. Malzahn has proven to be one of the top offensive minds in college football, he?s a good recruiter and he clearly can take a program from zero to hero real fast. Remember, he took Auburn to the BCS National Championship in his first year as head coach. This, after Gene Chizik went 3-9 in his final season with the Tigers.

He went to high school in Arkansas and started his coaching career as a top high school football coach in the state for multiple years. He was the offensive coordinator at Arkansas in 2006 and coached one season as head coach for Arkansas State, leading the Red Wolves to a 9-3 record.