Somehow, some way, Hugh Freeze is back in the saddle in the SEC. The Auburn Tigers decided to roll the dice by hiring the controversial coach who rebuilt his reputation at Liberty University in what was nothing short of a head-scratching move.

Freeze spent the 2012-2016 seasons at the helm of Ole Miss, during which the football program committed recruiting and academic violations that led to 27 of his wins being vacated, as well as a two-year postseason ban. An investigation through phone records also revealed Freeze made numerous calls from his work phone to escort services. This ultimately led to his resignation (though the school would have fired him anyway).

Liberty took a chance on Freeze, and he posted at least eight wins or better in each of his four seasons there. Now, Freeze is the main man on The Plains. It's time Auburn fans get to know the Freeze family, including his wife, Jill Freeze. 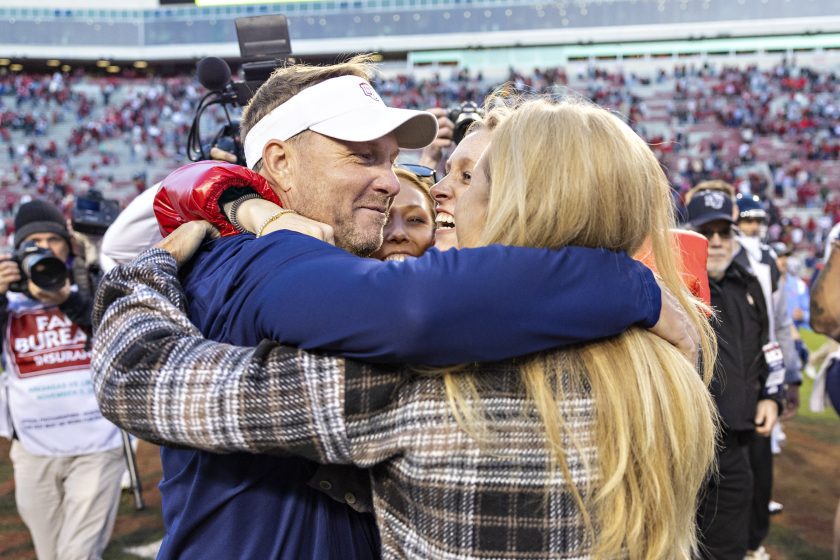 Hugh and Jill have been married for three decades, as the two tied the knot back in 1992 at a Baptist church in Independence, Mississippi. Of course, the pair have endured plenty of hardships throughout the years from the early days of his coaching career to the scandals that led to his ousting at Ole Miss.

Both have spoken at length about the escort calls that tested their marriage. Hugh Freeze had already confessed to his wife his sins in 2016 before that info became public knowledge.

"I've been spending the last year and a half wondering how do I get back the pure motives for what you do and why you do it?"

For Jill, who keeps her faith close to her the same way Hugh says he does, the forgiving process was about standing by her husband when no one else would. She admitted the choice was a conflicting one at first.

"In that immediately I was able to see him. His heart. I mean, I've lived with [Hugh] for 25 years. This man is the godliest man I have ever known. I am who I am in Christ because of this man and the impact and influence he has had on me."

From the looks of it, the pair haven't looked back since. They've healed. They've grown. And they've raised a loving family.

The Freezes have three daughters: Madison, 19, Ragan, 24, and Jordan, 22. Jordan not only attended Auburn but still lives in Auburn, so she figures to be a staple in Jordan-Hare Stadium while her dad is the coach. Ragan lists that she's the Executive Assistant for Football at Auburn in her social media accounts.

"I've believed in Auburn and loved it for a very long time. Now my whole family can agree with me by saying IT'S GREAT TO BE AN AUBURN TIGER," Jordan wrote on Instagram after her dad was announced as head coach.

Back when the girls were younger, and Hugh was coaching at Lambuth University in Jackson, Tennessee, the family spent time living in a rental unit they sarcastically referred to as "the palace." There, the girls slept on cots because the unit was too small for beds, Jill told The Clarion Ledger.

The Freeze family has come a long way since then, and I'm sure Auburn fans wish nothing but the best for him and his family as he begins his tenure with the Tigers.

MORE: 'Cadillac' Williams Hated His Nickname at First, But Now the Auburn Legend Loves It