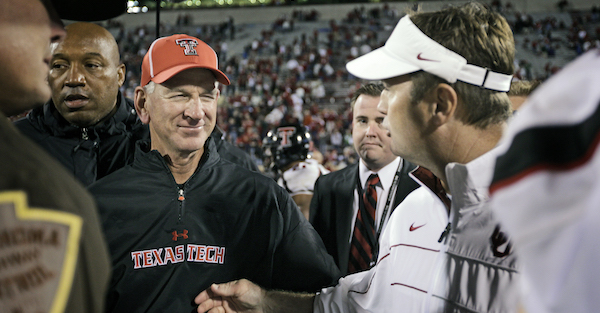 Auburn athletic director Jay Jacobs is stepping down on June 1, 2018, or sooner if the school can find a replacement, and one former coach and familiar name on the Plains believes he’s the right man for the job.

Former Auburn coach Tommy Tuberville made an appearance on The Opening Kickoff on WNSP-FM 105.5, and he told Al.com’s Mark Heim that he has the qualifications to replace Jacobs at Auburn.

Related: Decision officially made on the future of Auburn?s athletic director

Jacobs didn’t hire Tuberville, but he did fire him in 2008 after a 5-7 season and replaced him with Gene Chizik.

Tuberville went on to coach at Texas Tech and Cincinnati, and now he serves as an analyst for ESPN.

No candidate has emerged thus far in the school’s search for a replacement for Jacobs. Tuberville said he believes the school is underperforming athletically as a whole, and he believes he can help turn things around.

The athletic department at Auburn is in the midst of several scandals, including the FBI’s investigation into former basketball assistant Chuck Person, a Title IX investigation regarding sexual harassment in the softball program, and a federal discrimination lawsuit filed by a former assistant track coach.

The football program is in decent shape as they sit at No. 10 in the recent College Football Playoff rankings, but there is speculation Gus Malzahn could be in trouble if the Tigers lose to Georgia and Alabama down the stretch.