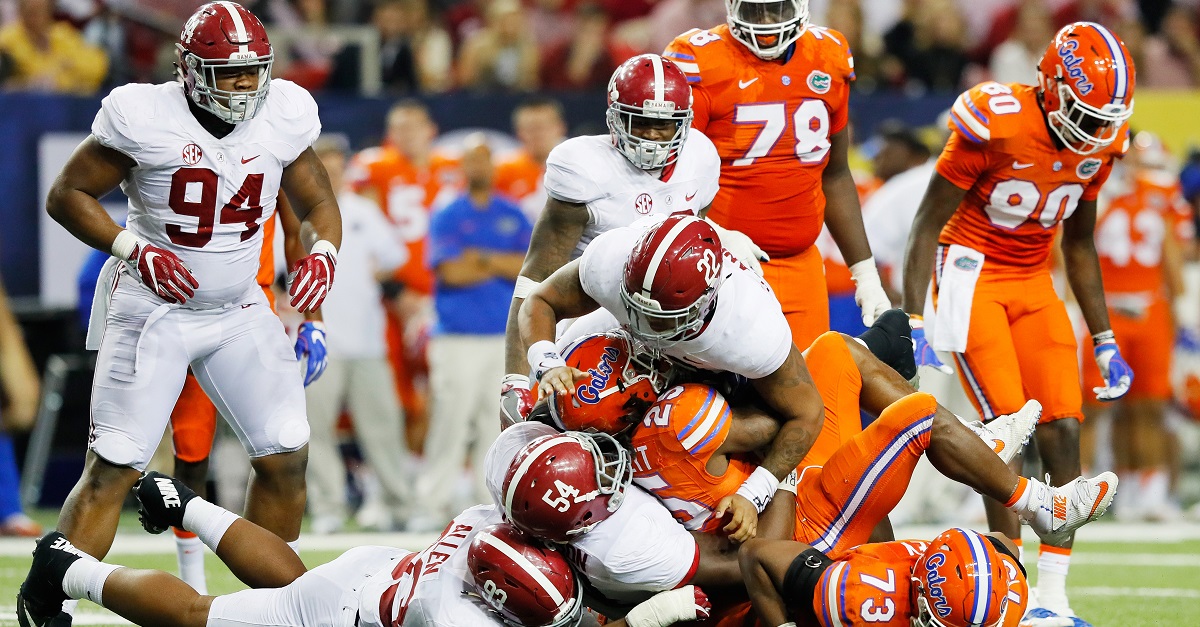 Kevin C. Cox/Getty Images
ATLANTA, GA - DECEMBER 03: Jordan Scarlett #25 of the Florida Gators is tackled by Ryan Anderson #22, and Dalvin Tomlinson #54 of the Alabama Crimson Tide in the third quarter during the SEC Championship game at the Georgia Dome on December 3, 2016 in Atlanta, Georgia. (Photo by Kevin C. Cox/Getty Images)

There are plenty of fan bases in the SEC and the country that could claim “most spoiled fan base” as their title, but writer and former Florida beat writer Andy Staples has named the one he thinks deserves the title. One beat writer refused to believe that Florida fans are worse than anyone other fan base.

I refuse to buy any narrative that Florida fans are somehow so much worse than fans at other major programs. Bull.

Pretty much the most spoiled fan base in America. But there are quite a few nipping at their heels for that title. https://t.co/fPptUUEWmT

He then gave a very specific example of why Florida fans are the worst and it’s hard to make a case against their title when something like this happens:

As a beat writer, I’d get e-mail from people mad at Meyer AFTER HE WON A NATIONAL TITLE because his teams didn’t score like Spurrier’s. https://t.co/gQcATZwCSf

But of course, he wanted to remind people that this is purely an opinion and there’s no data that could prove him right or wrong.

You want empirical data on which fan base is the most spoiled? Let me whip that right up. It’s an opinion, homeslice. https://t.co/jfqmTkH33L

The way Florida fans are acting now though certainly helps his case. They are getting mad at head coach Jim McElwain after he took the team to two SEC Championships and is struggling this year because he was forced to suspend several playmakers for their terrible decision-making. If Florida fans had patience and let McElwain develop Feleipe Franks as a quarterback there could be hope for the offense, but no one seems to want to give him a chance as they demand SEC and national titles now.