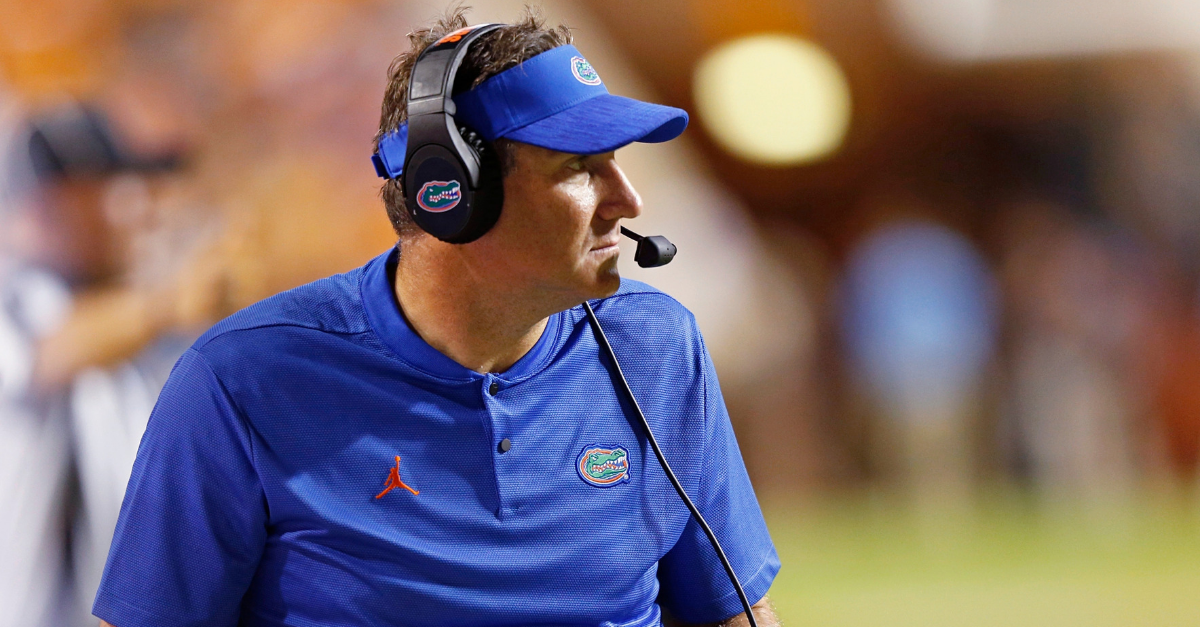 Although Mullen expressed disappointment in having two players and a staff member accused of violence toward women in the past month, he acknowledged Wednesday that he’d “be hypocritical if you look at my history to say to that is a 100% deal.”

Mullen’s past experiences explain why safety Brian Edwards and Otis Yelverton, an assistant director of player personnel, remain part of the program.

“Obviously, anybody that knows me, I like to take an extremely strong stance on that,” Mullen said before a stop on his annual booster tour. “I don’t see anything acceptable about that, any violence against women, whether it’s a violent act or a wrongful sexual act toward women. But I also like to have all the information before making final decisions.”

The momentum Dan Mullen spent a year and a half building has stalled in the last week and a half with two transfers, one recruiting miss, one decommit plus a player arrest. So how concerned should the #Gators be?
My analysis: https://t.co/UGrxInmf44 pic.twitter.com/Ox0Jdlpnkj

Edwards was accused last week of grabbing his girlfriend of two years by her neck as she attempted to leave their apartment. A witness intervened and called 911, according to Gainesville Police. Edwards was arrested on a battery charge, a first-degree misdemeanor. He pleaded not guilty.

Yelverton was arrested April 23 on a cyberstalking threat, according to Alachua County court records. Police said Yelverton threatened to blow up his ex-girlfriend’s car on a voicemail and either called, texted or messaged on Facebook 40 times after their breakup.

The 51-year-old Yelverton was arrested on an aggravated stalking charge, a third-degree felony.

Yelverton was placed on administrative leave.

Edwards is still taking classes at Florida, but has been suspended from all team activities.

Simmons was caught on video in 2016 striking a woman during a brawl that also involved his sister and mother. Simmons apologized for the incident and had no troubles during his three years at Mississippi State, the first two under Mullen.

Florida quarterback Jalon Jones also was accused of sexual battery twice in a 30-minute window on April 6. The freshman has since withdrawn from school and intends to transfer.

Chris Steele, the top-rated recruit in Mullen’s most recent signing class, and fellow cornerback Jaydon Hill were named in police reports as witnesses. They were Jones’ roommates.

Steele, who reportedly asked to switch to a different dormitory before the incident, left school last month and has since announced plans to transfer to Oregon.

“There’s a lot that went into that for him and his family in that decision,” said Mullen, who flew to California with his wife in hopes of convincing Steele to return. “One of the things we’ve done is try to support him. I’ve supported him from the day he got on campus to even through today. We’re still trying to support him and help him work through his decision and help him in the future.”

No violence toward women is one of Florida’s “core values,” and it’s included on signs that hang in the team meeting room.

“It’s really disappointing for us when we have individuals — whether it’s a student-athlete or a staff member — make a decision that negatively affects them but also shines a little bit of a negative on the program,” Mullen said. “(It’s) really disappointing because we spend a lot of time on decision-making with our guys. … We’re spending a lot of time on how to make good decisions in life, how to make good social decisions and how to better themselves in life. When these type of things happen, obviously, it’s very disappointing to us when there’s a couple of individuals that do that.”